IT HAPPENS WHENEVER I ENTER a convenience store or restaurant or laundromat or – really, any place where two or more people are gathered. It takes place within a particular geography: the rural county where I live and its neighboring farming areas. It looks like this: As I cross the threshold, all of the faces turn towards mine, expectantly. More than expectantly: they seem to seek some kind of salvation, and stare at me as if I’m their last hope. 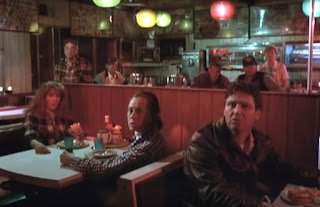 It’s unsettling. The stare persists long past the moment when politeness suggests you should look away. I’m the one who wrenches my eyes away from this gaze and that one, seeking a neutral place on which to focus.

This isn’t the saloon stare we know from Westerns. There’s no overt hostility on display. This stare seems to ask, “Are you here to rescue us?” Although I’m sure I’m reading into it.

I never encounter this in an urban area. Indeed, some places – I’m thinking of Manhattan’s tonier neighborhoods – fail to recognize my arrival at all, and this includes those ostensibly hired to sell me something or wait on me, depending upon the type of establishment I’ve entered. Oh, there may be a bit of expectancy displayed when I enter an urban bar, but, as I’m clearly not going to satisfy anybody’s dreamboat requirements, such gaze as there might be flickers away instantly.

What prompts the Stare? I sought an answer from a farmer in my neighborhood, a grizzled, elderly fellow named Edgar, who often is seen in a booth at the local Stewart’s, usually with a friend or two who share both his demographic and a half-dozen pack of doughnuts.

“Well,” says Edgar. “Gotta see if we know you.” (I like the plural pronoun he employs, reinforcing the idea of the Stare as a community-wide effort. “And if we know you, we gotta talk to you.”

This is true. I have witnessed what must have been intended as a quick stop for milk and lottery tickets turn into a lengthy confab as the new arrival is gossip-drawn to the Edgar booth and required to fill in details (or at least speculation) about the scandal of the day. A small town is rife with scandal, or at least the awareness of scandal, because there aren’t enough of them to turn the onlookers jaded.

“But you know me,” I remind Edgar. “Yet people still stare at me like that.”

“I don’t have anything to say.”

“I ain’t so sure. Wasn’t you havin’ some work done on that cistern of yours?”

An excavator tractor sat in my yard for a couple of weeks until the weather turned mild enough for digging, at which time some new pipe was run from cistern to cellar. “I thought that was obvious enough,” I ventured.

“Sure, it was obvious. But you coulda talked about it.”

My twenty-five years of rural living have taught me that any business conducted upon one’s property – or hollered loud enough within one’s house – becomes public knowledge with impressive speed. It never had seemed necessary to add details.

“So if I were to come in here and tell you all about that, everyone would stop staring at me?” I asked Edgar.

“Nobody’s gonna stop staring,” he said. “We’re always lookin’ for fresh news. Trouble is, new people like you don’t think to bring it.”

You? No news? Doesn't sound right.

But is that not good news?