With Sword or Gun

From the Back of the Vault Dept.: Thirty-some years ago, composer Tom Savoy and I wrote a musical titled Presenting Lily Mars, based on a Booth Tarkington novel that harkened back to Tarkington’s theatrical days in the early 1900s. It told the story of an aspiring actress who rises through a company’s ranks thanks to her talent and charm, but whose rise proves disruptive. The book I fashioned was overlong and clumsy, and my lyrics (to Tom’s delightful melodies) were similarly clunky. But here’s a lyric from a song that we cut early on in the proceedings, which was to be sung as part of a show within the show. I share it here to remind myself how shamelessly I tried to emulate the lyrics of W.S. Gilbert, even when I had to force the hell out of scansion and rhyme. 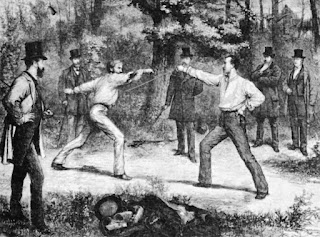 SEVENTEEN LONG YEARS AGO, my life in France was grueling;
Our fortune was extremely low, my father dead from dueling.
My mother fell too easily for the flatt’ry of another;
How horrible the way that he beguiled my charming mother!
And I am but my father’s son, and I guard my mother’s love –
This scoundrel was a nasty one, so I slapped him with my glove.

I met this rascal in a field a-full of fragrant heather.
He would not quit, he would not yield, so we faced off together.
We chose our pistols, picked our shot, and packed our caps and powder;
We stood on our selected spots. I could have stood no prouder.
My cuffs were white, my weskit red, my boots a shiny leather;
And soon I’d see this villain dead upon the fragrant heater.

The cloth was dropped, it fluttered down to signal actions dire;
I saw my victim start and frown, I heard the deadly fire.
His aim was true: he grazed my arm, and sent my bullet flying;
He stood as if I’d done no harm, then to the ground fell dying.
His second said, “Before you go to raise the vict’ry pennant,
I think it best that you should know: you’ve killed a King’s Lieutenant!”