From the Nostalgic Dining Vault: Of the several review visits I paid over the years to Jumpin’ Jack’s, Scotia’s venerable seasonal burger mecca, this 1990 essay bears special testament to its longevity because it’s still going strong even as Stash & Stella’s, a wholly fabricated attempt to create a ‘50s dining atmosphere, has vanished with nary a trace.

AS FAR AS MANY AREA EATERS ARE CONCERNED, it’s enough to murmur “they’re open.” Spring begins when Jumpin’ Jack’s fires up the grill, ups the prices by a coin or two and throws open its service windows. 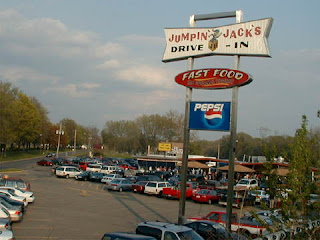 Both restaurants considered here today have a throwback theme. With Jumpin’ Jack’s, it’s completely artless. The places simply hasn’t changed in 36 years. Onetime supermarket employee Jack Brennan made a fortune with the place and sold it, but the tradition continues under Mark Lansing’s leadership.

There have been a few changes over the years. The tables have wooden roofs, for instance. But nothing has spoiled the carnival essence of the place.

For the uninitiated, Jumpin’ Jack’s is a fast-food joint on the bank of the Mohawk River just over the bridge when you take Route 5 from Schenectady to Scotia. You’ll see it down there on your right.

But no gimmicks are used to promote the product, which isn’t cooked in complicated, specially-built equipment. Your meal is made to order, as you can see when you follow the line of customers from ordering station to cash register.

The menu is simple, as fast-food menus should be. Burgers, including the double-decker, cole-slaw-topped Jack Burger. Hot Dogs. Fried fish. Fried clams. Onion rings and French fries. Sodas and shakes. $4.50 gets you a dinner, an entree of your choice with coleslaw, fries, and rings. And a buttered roll.

Whoever’s working the grill asks what you want, nimbly pointing down the line to collect a series of orders. Your patty gets flung onto the grill. Onions? Sure – and a heap of them is added.

The rest of your order is transmitted to the other workers using a special code developed over the years. Fried clams? “Jerry fry!” Onion rings? “Order o’ Indians!” From a pairing with French fries. Get it?

What seems like an easygoing crew fires up to a blistering pace when the orders start coming in fast, as they did one afternoon last week when I visited at lunchtime. The line wound around the mob-containing pipes and into the parking lot, but it moved quickly as burgers were fried and rolls steamed and sodas drawn.

Clam dinner for me, and tartar sauce on everything after a stop at the condiments table. Great, greasy stuff that more than satisfied my minimum daily cholesterol requirement.

And you’re never alone at Jumpin’ Jack’s. Once the sparrows see where you’re sitting, they’ll hang out a few feet away. Toss them a hunk of onion ring and marvel at the alacrity with which all of us animals will eat the least nutritious stuff.

MY WIFE WAS SUPPOSED TO MEET ME FOR DINNER later that day at the Rotterdam Mall, but we got our signals crossed and she missed me. I’m glad. Had she been there, I would never have gotten to sit across from Linda, who plopped into the seat opposite to take my order and reminded me of every crush I’ve ever had on a waitress – and there have been many.

It was one of the few real nostalgic touches in a franchise eatery that tries to recreate an early-‘60s diner feel. Not that they don’t do it well, but it’s just pre-fab enough to make you feel like you’re on a movie set.

In any event, I was persuaded to try the place when a friend told me that her uncle visits regularly “to watch the pretty waitresses get up on the counters and dance, the old pig.” Sounded enticing.

The mood is set as you enter. Only oldies on the jukebox – “Earth Angel,” “Surf City, U.S.A.,” “Johnny B. Goode” – you get the idea. Decor is railroad-car diner-inspired, with lots of stainless steel and that horrible light green color on the formica and vinyl. Add to that a cornucopia of vintage signs, including a number of old gas-station placards hung with deliberate irony over the booths.

Menus are in plastic slipcases, looking as if they were typed on a failing Underwood. An amusing bio of “Stash” is written there.

Then you hit the prices. Wow. Quick return to the ‘90s. $2.75 for a hot dog. $3.50 for a basket of cheese-topped garlic bread. Some people were dismayed enough to leave when they saw that part of it.

Nostalgia doesn’t come cheap. I won’t complain about the prices overmuch because you’re really paying for the whole show. If the food is pretty pedestrian, well, that’s an authentic part of it.

Now, what about this dancing? “The waitresses all get up and dance whenever someone plays `Twist and Shout’ on the jukebox,” Linda explained.

“Well, not everyone. And they don’t do it where people are sitting, of course.” She’s starting to laugh, and pauses to confess, ”I haven’t done it yet, but I just started here a couple of weeks ago.”

She guided me to a selection of a couple of items – I got that garlic/cheese basket and a bowl of chili – like a pro, proud to be part of the show.

It’s billed as a five-alarm chili, but it’s nothing more than your basic northern beef and kidney bean stew. What else would you expect? You’re not going to find endives or tortellini on this menu any too soon.

Nobody played “Twist and Shout” while I was there, and I was too bashful to do so. Linda stopped in at the opposite seat again to give me the check. Which got me thinking longingly of the early ‘60s and my own waitress-chasing days. I went back into the mall to find my wife.