From the Vault Dept.: I suspect that, like bagpipers and Barack Obama, barbershop quartets inspire only the most extreme opinions. I took a whack at singing in a roomful of b.q. aspirants a couple of years before writing the piece below, and it increased my admiration for what these singers do. Here’s my review of a 1987 concert by the River Valley Chorus, which is a member of the Sweet Adelines, and which continues to meet – but since I wrote that piece, they’ve moved to Tuesday nights in Schenectady, and there’s more info here.

THERE IS A CLOSE-HARMONY STYLE so distinctively American that any cliché image of the turn of the century includes a barbershop quartet. 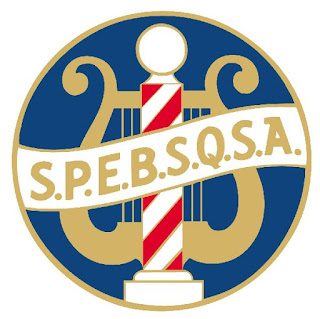 Men, of course, with large mustaches, singing of the women idealized in the old (pre-Hearst) Life magazine or, more rudely, on the Police Gazette. But women have proved vocal equals of men in the close-harmony field, and the national association of Sweet Adelines has promoted clubs just as enthusiastic as that men's group with all the initials.*

The River Valley Chorus celebrated these traditions with a concert titled “A Touch of Memory” at the Egg Saturday evening, which at its best was a terrific show of showmanship. And showwomanship.

For the opening, a Hollywood theme. Silver jumpsuits and sky-blue blouses, with even a few well-coordinated dance steps for something of a Busby Berkeley feel. If all the elements of this show had been that good, it would have been dazzling throughout.

But it suffered from a stilted, poorly-timed narration, interrupting the flow from segment to segment. And unless you're a die-hard fanatic, all those songs of yearning for a bygone day or lost love or whatever do begin to sound a lot alike.

The party included guest artists, including the State Streeters, who reinforced every preconception about modern barbershop groups: they wore fake skimmers, clip-on bow ties, and bright red vests – and sang much too fast.

“Everybody Loves a Lover” is the essential barbershop song: it breaks into two combinable parts (that’s why we heard “Play a Simple Melody” later on). But is it really necessary for anyone, I don’t care bow old, to sing “Melancholy Baby” any more? That’s as worn out for close-harmony purposes as “Satin Doll” has become for jazz.

Within the River Valley Chorus are a number of autonomous quartets, which treated us to a succession of well-performed numbers (although, again, the tendency is to take them too fast). We were asked to yearn for “Sonny Boy,” “When it’s Darkness on the Delta,” and to “Play a Song Like Daddy Used to Play.” Because “I’m a Grandma Now,” we were stuck with “Memories Only,” and, all in all, we wished we were “Back in Those Days Gone By.”

What a relief it was when the chorus did an about-face with an Elvis medley of “Heartbreak Hotel” and “Hound Dog.” Not your average chorus-of-women stuff, but that’s what makes a program special.

A quartet called Both Sides of the Fence visited from Nashua, NH, with some wonderful sequences that included a dynamic “Minnie the Moocher,” Johnny Ray’s “The Little Cloud that Cried,” the poignant “Lamplighting Time in the Valley,” and other hilarious surprises. All concerned would do well to pay attention to this group’s style and programming.

“The Way We Were,” used by the chorus as a linking device for the first half, is about as dreary a tune as they come, but it made me realize that another song I detest – “Memory,” from “Cats” – very sincerely sung by the River Valley unit Bittersweet, would be improved if someone would arrange a doo-wop setting behind it. Heard in close harmony, the song cries out for it.

The State Streeters. again reinforcing the fin de siecle image of the barbershop quartet, closed the first half with a terribly sexist song that tells the story of a man threatened by his sweetheart’s entertainment career who then marries her and forces her to perform only at home as she dances “The Bumpety Bump.”

I suspect this repertory has kicked around the old songbooks since Methuselah was a pup. How about enriching the books with newer standards? You could creep into the ‘20s and ‘30s to collect some fine songs, and I’ll even offer a tip: those two Jerome Kern ditties “A Fine Romance” and “The Way You Look Tonight” were written to be sung simultaneously.

The concert was a party that got a little wistful at the end, as Barbara Neveu’s “Anniversary Song” summed up the group’s emotions. Although much of the audience seemed to be family and friends already in the know about the River Valley Chorus, an invitation was extended to join the group’s weekly rehearsals on Wednesday evenings in Scotia.

*Society for the Preservation and Encouragement of Barber Shop Quartet Singing in America, Inc.
Posted by B. A. Nilsson at 11:30 PM