From the Vault Dept.: I’m revisiting old technology. More specifically, I’m digitizing cassettes that seem worth keeping, cassettes that have languished in a closet far too long. A recent candidate was a program by the Catskill Woodwind Quintet, some of the pieces on which were performed by the group in 1990 at a fascinating venue called the Windfall Dutch Barn. And here’s the review I wrote.

TUCKED INTO THE SOUTHWEST CORNER of Montgomery County, this little town has an agricultural history that still characterizes the landscape – and left behind an old Dutch barn that some neighbors had the good sense to restore a few years back. 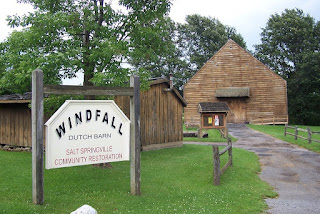 The Windfall Dutch Barn is now a site for cultural events, and hosted a reunion of the Catskill Woodwind Quintet last night that featured a quartet of pieces written for the group throughout the previous decade.

I’ve never seen a more sylvan setting for a concert, in which the barn itself was a personality. A brief thundershower punctuated one of the works and the resultant changes in temperature and air pressure caused, as composer (and former barn neighbor) Harvey Sollberger observed, “the wood to sing its own songs.”

Carleton Clay is an Oneonta-based composer and trumpet player who is a founding member of the Catskill Conservatory, a group that includes the wind quintet and other performance entities.

His “Song with Tropes” was premiered in Schoharie County and had its second performance here four years ago, and is a compelling study of instrumental timbre realized through simple melody and rhythm. The piece is so spare at times that it sounds like an old chant, with a syncopated figure leaping from octave to octave to finish the song of the title. The tropes, named for a style of musical interruption, are no less gentle, focusing more on individual instruments.

The work is a charming opener and very good complement to the piece that followed, Sollberger’s “The Humble Heart.”

Taking its title from a Shaker hymn, the piece incorporates a few such hymns in a texture that shifts from sweet to somewhat chaotic, always pulled back in line by the gentle melodies.

It calls for some virtuoso work by each of the players, although the composer, himself a flutist, seemed to pick extra often on that instrument. He had a worthy champion in Floyd Hebert, who also got the nifty task of strolling from the room while playing the easygoing hymn that finally silences the other, pesky, players.

A wind quintet has an array of textures you’ll find in no other similarly-sized configuration, and the key to each of the works on this program was the attention paid to those qualities. Vivian Fine’s “Dancing Winds,” written three years ago and soon destined for choreography by Skidmore’s Paul Sanasardo, takes a simple brew of rhythmically playful melodic elements and gives us a dazzling tour of the mixtures obtainable with the winds (and that oddly- and yet perfectly-placed cousin, the French horn).

Frank Bennett’s 1981 “Elements” gave a jazzy conclusion to the concert, in its way summing up all that had come before as it shifted from slow, dronelike sections to lively dances. And Bennett’s music has a clever spontaneity: the hypnotic 7/4 tempo of the third movement, for example, produced a lullaby-like effect you wouldn’t have expected in that context.

This concert epitomizes what music-making in this country should be about: at its heart is a community supporting the work of viable composers, welcoming players based in country and city to explore those works. The event is encouraged by state and federal funding, a vital part of this branch of the arts, and especially vital if new work is going to continue to grow.

Although the creeping hand of censorship would seem to be far away from this kind of music-making, it will be among the first to go if the current climate of artistic fear and mistrust is allowed to spread.