The slow movement of Schubert’s “Death and the Maiden” Quartet presents its haunting theme (from the song that gives the work its title) as a sad, shuffling march, its mournfulness only made the sadder by the Picardy third that tries to lighten the mood at the opening statement’s end. 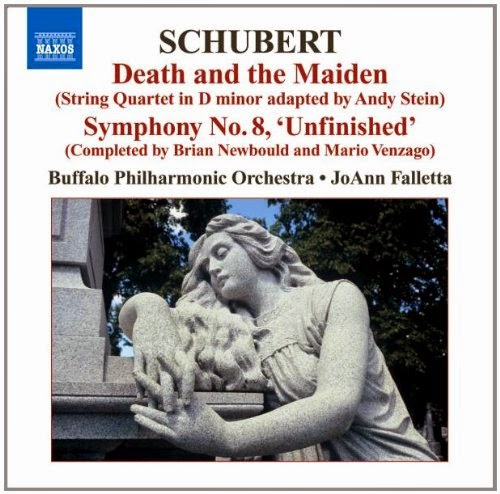 Five variations follow, giving the quartet players a wide range of styles and dynamics as the ever-present feeling of foreboding weaves through. It’s intimate music for an intensely personal struggle, and could never work in any other form. So believes what I used to call the “purist” in me, and which got knocked aside when I heard an orchestral version of the work that carries its heartache and other emotional demands to this bigger canvas with such a thorough sense of accomplishment that it easily stands beside Schubert’s other symphonies.

“It’s his best one,” says Andy Stein, and he has a right to this opinion: he orchestrated the piece. “Schubert was writing everything in a hurry at that point – he knew he wasn’t going to live much longer – that I don’t think he was about to take the time to write it for orchestra. But that’s where it belongs.”

I’d had a taste of Stein’s such work a few years ago, when I saw the Kalichstein-Laredo-Robinson Trio finish a concert at the Saratoga Performing Arts Center with a Stein-arranged encore of George Gershwin’s “Summertime.”

“When I arranged the Schubert quartet, I borrowed a lot of ideas from Beethoven, who knew far better than Schubert how to orchestrate. And I’ve also done the reverse: I arranged Beethoven’s Symphony No. 2 for the eight instruments Schubert used in his Octet.”

Stein is a violinist – and saxophonist, and singer – as well as an arranger and composer of classical and jazz pieces, along with film music and even an opera, the last-named written with Garrison Keillor, on whose radio program Stein performed for many years.

Your best chance of seeing (and hearing) Andy these days is on the Monday and Tuesday evenings when he’s performing with Vince Giordano and the Nighthawks at The Iguana, a very nice Mexican restaurant at 240 West 54th Street in Manhattan. Giordano leads an eleven piece group – you’ve seen them on “Boardwalk Empire” – dedicated to authentic performances of jazz from the 1920s and ’30s, drawing from the extraordinary collection of charts that Giordano has collected.

Violin is Stein’s mainstay there, although he picks up a sax when the chart requires it. He’ll also play his Stroh violin (also known as a violinophone), which puts a metal horn on the instrument to give it a louder, more focused sound, and one that fits in nicely with the surrounding brass.

By the final set of a Giordano evening, there’s more spontaneity. Charts emerge that the players haven’t seen before yet play like old masters; a singer is drawn from the eager audience and performs. When Tamar Korn took the microphone during a recent session to sing “You’re Driving Me Crazy,” Andy accented the lyrics with double-stopped slides and other improvised obliggati.

The classically trained Stein grew up surrounded by chamber music, yet spent his early performing years with Commander Cody and His Lost Planet Airmen and the Western swing group Asleep at the Wheel. 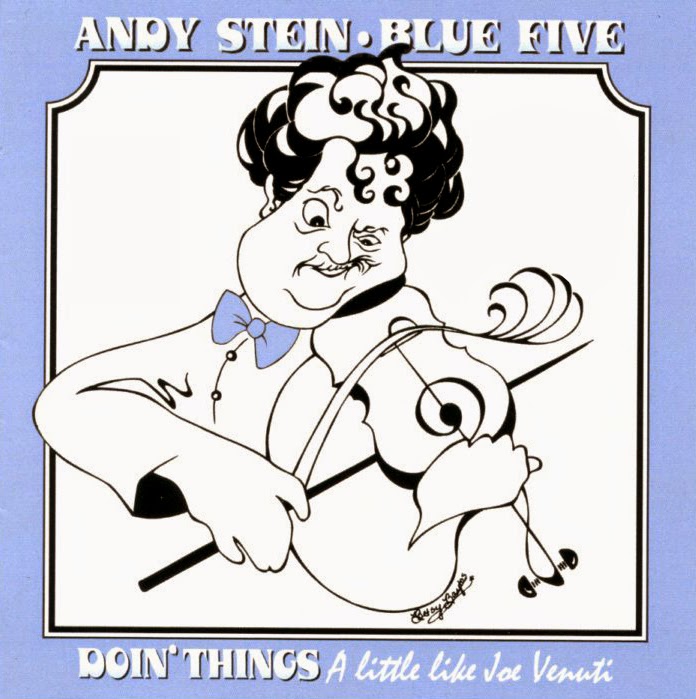 But he moves from Bob Wills to Joe Venuti with ease. He proved it with a recording made in 2003 that salutes Venuti and guitarist Eddie Land in a quintet setting that also includes Giordano on bass sax, string bass, and a delightfully eccentric vocal; reedman Dan Levinson (also a Nighthawks stalwart) capturing the spirit of players like Frank Trumbauer and Adrian Rollini, pianist David Boeddinghaus, and guitarist Martin Wheatley or Matt Munisteri.

Titled “Doin’ Things,” the CD is more than a tribute. With vintage Venuti-Lang numbers like “Stringin’ the Blues,” “Doin’ Things,” and “Beatin’ the Dog,” Stein and company explore the sound of the originals in a language that’s not entirely antique. Don’t look for sudden attacks of Bop or the like, but the freedom to take a solo that doesn’t have to be slavish to its antecedent. And originals like “Strappin’ the Strings” (Stein calls the naming technique “Verbing the Noun”) extend that language with new stories to tell. Besides, you can never have too many numbers that call for the Venuti technique of re-stringing his bow to slide across all four of the fiddle’s strings at once, giving an unexpectedly full and throaty sound.

There really are no categories in music. That kind of thing is imposed by people who make money off of marketing the stuff. For the rest of us, it’s a fascinating continuum – and Stein has made himself comfortable in a wide swath of it.
Posted by B. A. Nilsson at 10:28 PM

Thanks Byron for your write up on Andy Stein and mentioning my band and our gig !! A good, fun read ! best wishes: Vince Giordano & The Nighthawks