Guest Blogger Dept.: A richly detailed excerpt from Booth Tarkington’s Penrod and Sam, but focusing more on animals than on the titular boys. It forms one complete chapter of the book, but two more chapters complete the story. If you’re curious, it’s easy to find online.

ON A FAIR SATURDAY AFTERNOON in November Penrod’s little old dog Duke returned to the ways of his youth and had trouble with a strange cat on the back porch. This indiscretion, so uncharacteristic, was due to the agitation of a surprised moment, for Duke’s experience had inclined him to a peaceful pessimism, and he had no ambition for hazardous undertakings of any sort. He was given to musing but not to avoidable action, and he seemed habitually to hope for something which he was pretty sure would not happen. Even in his sleep, this gave him an air of wistfulness. 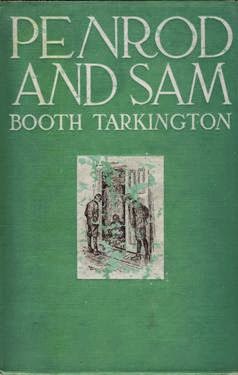 Thus, being asleep in a nook behind the metal refuse-can, when the strange cat ventured to ascend the steps of the porch, his appearance was so unwarlike that the cat felt encouraged to extend its field of reconnaissance—for the cook had been careless, and the backbone of a three-pound whitefish lay at the foot of the refuse-can.

This cat was, for a cat, needlessly tall, powerful, independent, and masculine. Once, long ago, he had been a roly-poly pepper-and-salt kitten; he had a home in those days, and a name, “Gipsy,” which he abundantly justified. He was precocious in dissipation. Long before his adolescence, his lack of domesticity was ominous, and he had formed bad companionships. Meanwhile, he grew so rangy, and developed such length and power of leg and such traits of character, that the father of the little girl who owned him was almost convincing when he declared that the young cat was half broncho and half Malay pirate—though, in the light of Gipsy’s later career, this seems bitterly unfair to even the lowest orders of bronchos and Malay pirates.

No; Gipsy was not the pet for a little girl. The rosy hearthstone and sheltered rug were too circumspect for him. Surrounded by the comforts of middle-class respectability, and profoundly oppressed, even in his youth, by the Puritan ideals of the household, he sometimes experienced a sense of suffocation. He wanted free air and he wanted free life; he wanted the lights, the lights, and the music. He abandoned the bourgeoisie irrevocably. He went forth in a May twilight, carrying the evening beefsteak with him, and joined the underworld.

His extraordinary size, his daring, and his utter lack of sympathy soon made him the leader—and, at the same time, the terror—of all the loose-lived cats in a wide neighbourhood. He contracted no friendships and had no confidants. He seldom slept in the same place twice in succession, and though he was wanted by the police, he was not found. In appearance he did not lack distinction of an ominous sort; the slow, rhythmic, perfectly controlled mechanism of his tail, as he impressively walked abroad, was incomparably sinister. This stately and dangerous walk of his, his long, vibrant whiskers, his scars, his yellow eye, so ice-cold, so fire-hot, haughty as the eye of Satan, gave him the deadly air of a mousquetaire duellist. His soul was in that walk and in that eye; it could be read—the soul of a bravo of fortune, living on his wits and his valour, asking no favours and granting no quarter. Intolerant, proud, sullen, yet watchful and constantly planning—purely a militarist, believing in slaughter as in a religion, and confident that art, science, poetry, and the good of the world were happily advanced thereby—Gipsy had become, though technically not a wildcat, undoubtedly the most untamed cat at large in the civilized world. Such, in brief, was the terrifying creature which now elongated its neck, and, over the top step of the porch, bent a calculating scrutiny upon the wistful and slumberous Duke.

The scrutiny was searching but not prolonged. Gipsy muttered contemptuously to himself, “Oh, sheol; I’m not afraid o’ that!” And he approached the fishbone, his padded feet making no noise upon the boards. It was a desirable fishbone, large, with a considerable portion of the fish’s tail still attached to it.

It was about a foot from Duke’s nose, and the little dog’s dreams began to be troubled by his olfactory nerve. This faithful sentinel, on guard even while Duke slept, signalled that alarums and excursions by parties unknown were taking place, and suggested that attention might well be paid. Duke opened one drowsy eye. What that eye beheld was monstrous.

Here was a strange experience—the horrific vision in the midst of things so accustomed. Sunshine fell sweetly upon porch and backyard; yonder was the familiar stable, and from its interior came the busy hum of a carpenter shop, established that morning by Duke’s young master, in association with Samuel Williams and Herman. Here, close by, were the quiet refuse-can and the wonted brooms and mops leaning against the latticed wall at the end of the porch, and there, by the foot of the steps, was the stone slab of the cistern, with the iron cover displaced and lying beside the round opening, where the carpenters had left it, not half an hour ago, after lowering a stick of wood into the water, “to season it.” All about Duke were these usual and reassuring environs of his daily life, and yet it was his fate to behold, right in the midst of them, and in ghastly juxtaposition to his face, a thing of nightmare and lunacy.

Gipsy had seized the fishbone by the middle. Out from one side of his head, and mingling with his whiskers, projected the long, spiked spine of the big fish: down from the other side of that ferocious head dangled the fish’s tail, and from above the remarkable effect thus produced shot the intolerable glare of two yellow eyes. To the gaze of Duke, still blurred by slumber, this monstrosity was all of one piece—the bone seemed a living part of it. What he saw was like those interesting insect-faces which the magnifying glass reveals to great M. Fabre. It was impossible for Duke to maintain the philosophic calm of M. Fabre, however; there was no magnifying glass between him and this spined and spiky face. Indeed, Duke was not in a position to think the matter over quietly. If he had been able to do that, he would have said to himself: “We have here an animal of most peculiar and unattractive appearance, though, upon examination, it seems to be only a cat stealing a fishbone. Nevertheless, as the thief is large beyond all my recollection of cats and has an unpleasant stare, I will leave this spot at once.”

On the contrary, Duke was so electrified by his horrid awakening that he completely lost his presence of mind. In the very instant of his first eye’s opening, the other eye and his mouth behaved similarly, the latter loosing upon the quiet air one shriek of mental agony before the little dog scrambled to his feet and gave further employment to his voice in a frenzy of profanity. At the same time the subterranean diapason of a demoniac bass viol was heard; it rose to a wail, and rose and rose again till it screamed like a small siren. It was Gipsy’s war-cry, and, at the sound of it, Duke became a frothing maniac. He made a convulsive frontal attack upon the hobgoblin—and the massacre began.

Never releasing the fishbone for an instant, Gipsy laid back his ears in a chilling way, beginning to shrink into himself like a concertina, but rising amidships so high that he appeared to be giving an imitation of that peaceful beast, the dromedary. Such was not his purpose, however, for, having attained his greatest possible altitude, he partially sat down and elevated his right arm after the manner of a semaphore. This semaphore arm remained rigid for a second, threatening; then it vibrated with inconceivable rapidity, feinting. But it was the treacherous left that did the work. Seemingly this left gave Duke three lightning little pats upon the right ear, but the change in his voice indicated that these were no love-taps. He yelled “help!” and “bloody murder!”

Never had such a shattering uproar, all vocal, broken out upon a peaceful afternoon. Gipsy possessed a vocabulary for cat-swearing certainly second to none out of Italy, and probably equal to the best there, while Duke remembered and uttered things he had not thought of for years.

The hum of the carpenter shop ceased, and Sam Williams appeared in the stable doorway. He stared insanely.

“My gorry!” he shouted. “Duke’s havin’ a fight with the biggest cat you ever saw in your life! C’mon!”

His feet were already in motion toward the battlefield, with Penrod and Herman hurrying in his wake. Onward they sped, and Duke was encouraged by the sight and sound of these reinforcements to increase his own outrageous clamours and to press home his attack. But he was ill-advised. This time it was the right arm of the semaphore that dipped—and Duke’s honest nose was but too conscious of what happened in consequence.

A lump of dirt struck the refuse-can with violence, and Gipsy beheld the advance of overwhelming forces. They rushed upon him from two directions, cutting off the steps of the porch. Undaunted, the formidable cat raked Duke’s nose again, somewhat more lingeringly, and prepared to depart with his fishbone. He had little fear for himself, because he was inclined to think that, unhampered, he could whip anything on earth; still, things seemed to be growing rather warm and he saw nothing to prevent his leaving.

And though he could laugh in the face of so unequal an antagonist as Duke, Gipsy felt that he was never at his best or able to do himself full justice unless he could perform that feline operation inaccurately known as “spitting.” To his notion, this was an absolute essential to combat; but, as all cats of the slightest pretensions to technique perfectly understand, it can neither be well done nor produce the best effects unless the mouth be opened to its utmost capacity so as to expose the beginnings of the alimentary canal, down which—at least that is the intention of the threat—the opposing party will soon be passing. And Gipsy could not open his mouth without relinquishing his fishbone.

Therefore, on small accounts he decided to leave the field to his enemies and to carry the fishbone elsewhere. He took two giant leaps. The first landed him upon the edge of the porch. There, without an instant’s pause, he gathered his fur-sheathed muscles, concentrated himself into one big steel spring, and launched himself superbly into space. He made a stirring picture, however brief, as he left the solid porch behind him and sailed upward on an ascending curve into the sunlit air. His head was proudly up; he was the incarnation of menacing power and of self-confidence. It is possible that the white-fish’s spinal column and flopping tail had interfered with his vision, and in launching himself he may have mistaken the dark, round opening of the cistern for its dark, round cover. In that case, it was a leap calculated and executed with precision, for as the boys clamoured their pleased astonishment, Gipsy descended accurately into the orifice and passed majestically from public view, with the fishbone still in his mouth and his haughty head still high.

There was a grand splash!