Speaking of Diners Dept.: And we were doing so just the other day, saluting Schenectady’s defunct Ruby’s. Happily, Jack’s Drive-In endures (and has done so for 77 years) and will open for the season on Monday, March 23. Here’s my 2009 review of the place.

A STRANGE KIND OF CHANGE came over my friend Peter as we neared our lunch destination. He grew unprecedentedly quiet, somber even. “It’s just ahead,” he murmured as the small red shack and its white roadside sign eased into view. “You’ve never been here before? I grew up with this place.” 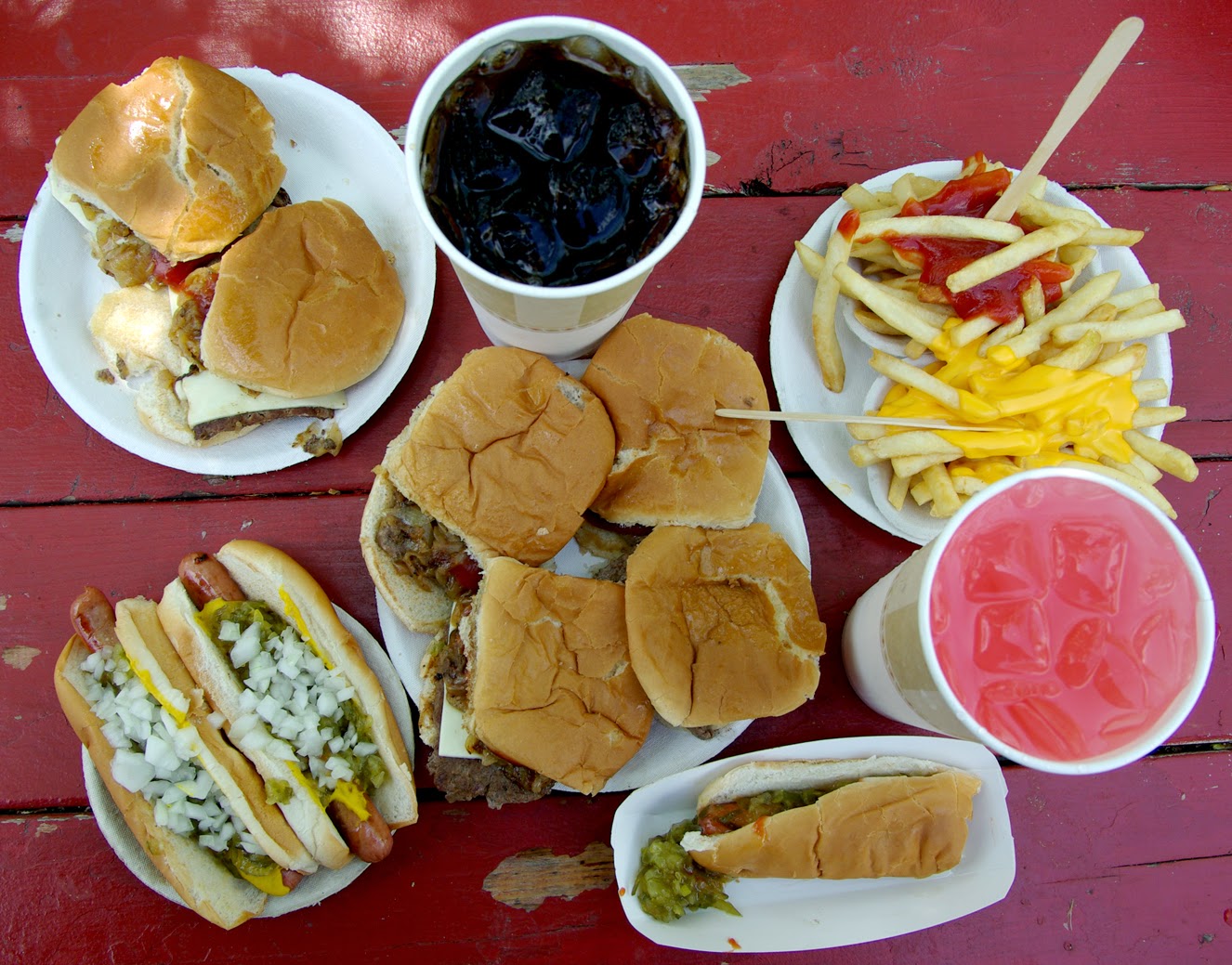 This was more than a search for a meal: this was a pilgrimage. We parked and walked the grounds slowly. “This used to be gravel,” he said of the parking lot. “And the original building was much smaller. It burned down years ago. My parents came here when they were dating, so it’s been here a long, long time.”

In fact, it opened in 1938, my subsequent research revealed, when RPI grad Jack Horn sought some supplementary cash. He got it, and then some.

Although Jack’s has changed in many ways over the years, a greater sense of continuity remains in the eyes of its fanatic followers. Enough so that the greatest scandal to hit the place in recent years was the addition of cheese to the burgers 15 years ago.

According to manager Dave Hardy, cheeseburgers now dominate the orders. Hardy started at Jack’s in 1970 – back when there were carhops hustling food to the patrons – and returned after a brief hiatus to take over the helm. Has the place lost its appeal over the years? Not if the current level of business is any indication.

Make your own pilgrimage between now and early November, and prepare for an experience that is as much about nostalgia – whether you’ve been to Jack’s before or not – as it is about burgers. Because the burgers are in a class by themselves, and not to all tastes.

My ideal burger is something rarely found in restaurants and almost never in fast-food joints. But a place like Jack’s – and the unrelated but similarly long-lived Jumpin’ Jack’s in Scotia – offers its sandwich in a more complicated context.

Physically deconstruct a Jack’s slider and you find s small, square patty dwarfed by its bun, draped in the cheese you probably ordered, with ketchup and possibly fried onions among its toppings. Nothing especially unusual or outstanding here. The sum is much greater than its parts, which you discover upon making . . .

The emotional deconstruction. This is more complicated. This you do by actually settling in at a picnic table and eating. For some reason, the burger not only is tasty, it’s also a great comfort. The cheese on your fries (because you couldn’t resist ordering them so topped) clearly was pumped from a can, and bears little resemblance to anything produced by a true fromagerie, but it combines, it enhances, it travels to the roof of your mouth and, for a little while, lingers.

Let’s look at the entire process of roadside burger dining to see where and why the magic happens.

If you’re a longtime customer, like Peter, you’ve rung the Pavlovian bell long before Jack’s comes into view. Conditioned by so many past visits, you’re primed for another. As a first-time customer, you will be affected by the aroma of sizzling beef and the pungent, resin-y smell of a frialator punishing potatoes.

It’s the fragrance of every cookout you’ve ever enjoyed. It’s the scent of our hungry ancestors, an awareness carried in our DNA, roasting the day’s provender. It lives on in that wee, greasy patty. It’s a cheap enough journey: $1.65 per burger, $1.95 with cheese.

Hunting dinner with autos instead of sidearms makes sense in our society. Our cars are extensions of ourselves, idealized representations of the power we wish to suggest. They’re instrumental to our courtship, our occupations, our free-time traveling. At Jack’s we can circle the parking lot as if circling our prey, and pounce merely by standing in line and surrendering money.

Al fresco dining is always a treat. Not the greatest view here, but that’s not the point. Fresh air ruffles the skin, provokes the appetite. You’re sitting around the campfire, in effect, with the genteel additions of buns and forks and straws to make consumption more civilized.

And then the meal itself. The bun is a component of genius. It contains the fat-enhanced flavors that otherwise might drip away. You eat with your hands, a primal act, but it’s a socially acceptable sandwich you’re wielding.

Fries add the crunch that’s always desirable with a meal. Crunch and fat and the piquancy of ketchup for a long, lingering flavor experience. This isn’t about hand-formed gourmet patties. This is about getting food to the table quickly. Better still: food in a bag, consumed while driving, combining two of our top three activities.