From the CD Shelf Dept.: Mario Castelnuovo-Tedesco wrote a version of “Largo al factotum” (from Rossini’s “Barber of Seville”) for Jascha Heifetz to play, exploring all of the impossible show-off techniques of the fiddle and even giving the piano high comedy in the form of a triplet figure at the end that starts on far-removed Cs (left hand: three octaves below middle-C, right hand: four octaves above it) and proceeds chromatically until they’re an octave apart. Useless to describe; great fun to hear. His violin concertos, though much more serious, radiate similar charm.

Naxos has served the music of Mario Castelnuovo-Tedesco quite well, having issued CDs of his piano concertos, several discs of solo piano words, works for cello, for violin, for chamber ensemble, sacred music, all of the Shakespeare overtures and the 30 songs he set from Shakespeare’s play, guitar music galore (Segovia was a friend), including his own “Goyescas,” a two-CD set of short pieces inspired by Goya’s etchings Los Caprichos, and, of course, the guitar concerts, the first of which keeps the composer’s name alive in the concert hall. 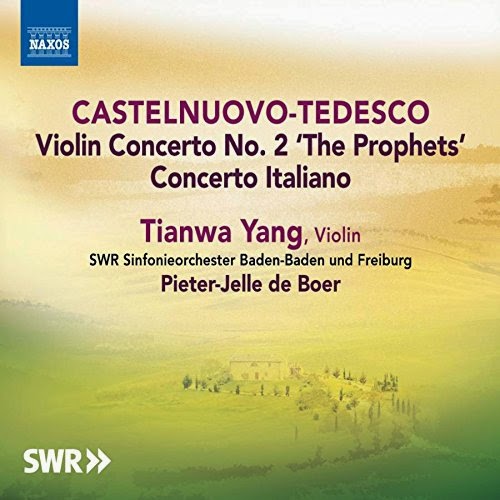 Castelnuovo-Tedesco was born in Italy in 1895. A prodigy who began composing at the age of nine, his works soon gained fame enough to make them a staple of performances and radio broadcasts, all of which skidded to a close as Mussolini aligned himself with Hitler and the works by the Jewish composer were ignored.

A 1939 concert appearance in New York led to his emigration, with Toscanini as a sponsor. He had another champion in Heifetz, who had performed Castelnuovo-Tedesco’s first violin concerto a few years earlier and was now pestering the composer for another. Naxos has issued Heifetz’s 1954 recording of Castelnuovo-Tedesco’s Violin Concerto No. 2, as definitive as a rendering as you’ll find, but a new recording, with violinist Tianwa Yang, pairs it with its predecessor – and restores a few measures of music missing from the Heifetz version of number two.

The two pieces, written only a few years apart, not only give us a sense of the composer’s development in writing for orchestra but also demonstrate his search for his Jewish identity, which comes to the fore in the second concerto.

Although they pre-date his move to the United States, there’s a kind of Hollywood sound in the scores that verges occasionally on the overwrought, and it’s not surprising. Along with Korngold, an Austrian émigré, Castelnuovo-Tedesco helped define that sound, working on over 200 movies once he moved to California in 1940. (Among his students were Henry Mancini, André Previn, and John Williams.)

The concerto number one is subtitled “Concerto Italiano” and pays homage to 18th-century lyricism within a 20th-century orchestral sound, but it’s a rich, tuneful sound, the kind soon considered undesirably melodic by the Schoenberg-smitten academy. Themes in the opening movement are posed by the orchestra before the soloist carries them further; the slow movement is unabashedly lyrical, and the rondo-like finale gives the fiddle some fireworks without getting too Paganini about it.

It’s the second concerto, titled “The Prophets,” that shows the composers full personality. The themes are drawn from traditional Jewish melodies, woven into a Classical-style concerto construction. Although the opening movement’s orchestration throbs with contemplative beauty, its high point is when a harp joins the solo violin in the cadenza, a beautiful melding of textures. The slow movement rises to a peak of its own drama before yielding to a merry finale that sounds at times as if it came out of a movie western.

We know Tianwa Yang from her excellent recordings of Sarasate’s works for violin and orchestra. The recorded sound and balance between violin and orchestra on this disc let the textures shine, so even if you’re familiar with number two you’ll hear many surprises. And it’s the recording debut of number one, which makes the CD worth it for that alone.