Guest Blogger Dept.: Booth Tarkington’s 1918 novel The Magnificent Ambersons traced the post-bellum decline of a grand old Indiana family even as technology – in particular, the automobile – was changing the landscape and society. The book won the 1919 Pulitzer Prize and inspired three film versions, most notably the one by Orson Welles. Here, from the novel’s opening pages, is a look at the changing fashions of late-19th-century Indiana. 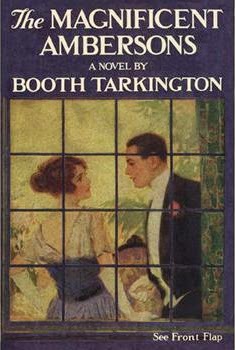 IN THAT TOWN, in those days, all the women who wore silk or velvet knew all the other women who wore silk or velvet, and when there was a new purchase of sealskin, sick people were got to windows to see it go by. Trotters were out, in the winter afternoons, racing light sleighs on National Avenue and Tennessee Street; everybody recognized both the trotters and the drivers; and again knew them as well on summer evenings, when slim buggies whizzed by in renewals of the snow-time rivalry. For that matter, everybody knew everybody else's family horse-and-carriage, could identify such a silhouette half a mile down the street, and thereby was sure who was going to market, or to a reception, or coming home from office or store to noon dinner or evening supper.

During the earlier years of this period, elegance of personal appearance was believed to rest more upon the texture of garments than upon their shaping. A silk dress needed no remodelling when it was a year or so old; it remained distinguished by merely remaining silk. Old men and governors wore broadcloth; “full dress” was broadcloth with “doeskin” trousers; and there were seen men of all ages to whom a hat meant only that rigid, tall silk thing known to impudence as a “stove-pipe.” In town and country these men would wear no other hat, and, without self-consciousness, they went rowing in such hats.

Shifting fashions of shape replaced aristocracy of texture: dressmakers, shoemakers, hatmakers, and tailors, increasing in cunning and in power, found means to make new clothes old. The long contagion of the “Derby” hat arrived: one season the crown of this hat would be a bucket; the next it would be a spoon. Every house still kept its bootjack, but high-topped boots gave way to shoes and “congress gaiters”; and these were played through fashions that shaped them now with toes like box-ends and now with toes like the prows of racing shells.

Trousers with a crease were considered plebeian; the crease proved that the garment had lain upon a shelf, and hence was “ready-made”; these betraying trousers were called “hand-me-downs,” in allusion to the shelf. In the early ‘eighties, while bangs and bustles were having their way with women, that variation of dandy known as the “dude” was invented: he wore trousers as tight as stockings, dagger-pointed shoes, a spoon “Derby,” a single-breasted coat called a “Chesterfield,” with short flaring skirts, a torturing cylindrical collar, laundered to a polish and three inches high, while his other neckgear might be a heavy, puffed cravat or a tiny bow fit for a doll’s braids. With evening dress he wore a tan overcoat so short that his black coat-tails hung visible, five inches below the over-coat; but after a season or two he lengthened his overcoat till it touched his heels, and he passed out of his tight trousers into trousers like great bags. Then, presently, he was seen no more, though the word that had been coined for him remained in the vocabularies of the impertinent.

It was a hairier day than this. Beards were to the wearers’ fancy, and things as strange as the Kaiserliche boar-tusk moustache were commonplace. “Side-burns” found nourishment upon childlike profiles; great Dundreary whiskers blew like tippets over young shoulders; moustaches were trained as lambrequins over forgotten mouths; and it was possible for a Senator of the United States to wear a mist of white whisker upon his throat only, not a newspaper in the land finding the ornament distinguished enough to warrant a lampoon. Surely no more is needed to prove that so short a time ago we were living in another age!