From the Vault Dept.: Summer in New York’s Capital Region means it’s time for an al fresco meal at Jumpin’ Jack’s in Scotia. I’ve written about the place a few times during my reviewing career, and have visited often. Too often, I fear, but the experience is irresistible. Here’s the first piece I wrote about the place, from 1987, when the column was new and we couldn't afford to pay for meals. The McDonald’s mentioned as being across the street long since went under.

“AS A FORMER LIFEGUARD at Collins Park,” said Drew, sighting down the barrel of his camera, ''I can tell you this was always a jumpin’ spot for young ladies out sunbathing.” 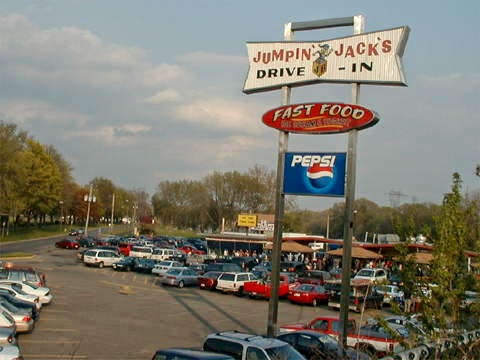 Springtime in Scotia is marked, as it has been during the lifetime of all baby-boomers, by the opening of Jumpin’ Jack’s Drive-In, just across the Western Gateway Bridge from Schenectady. This Metroland visit was announced, sure; but what difference does that make? Jumpin’ Jack’s is consistent – they serve a limited menu quickly and with a style all their own.

The architecture is an anachronism, but it has gone from being merely dated to acquiring that special dignity of the archetype: there’s not another drive-in with the same sense of the early ‘60s in the Capital Region. In California, where such items are treasured like the artifacts of an archeological dig, you probably could sell the place for a fortune.

There are changes from year to year. Prices creep up a nickel or a dime; a soft ice cream stand was built; most recently wooden umbrellas were erected over the tables. But it’s all kept in the proper style.

The line snakes around a labyrinth of pipes. Drew and I were joined on this outing by our editor, another Jump-in’ Jack’s alumnus. The menu is a vast colorful sign that hangs over the long counter, a banquet of fried items that has become the mainstay of the plastic fast-food joints. We assembled our orders.

This is what you wish your school cafeteria could be like. An assembly line where every movement counts and you can see every part of your meal being assembled.

“Who’s next?” the grillman said, pointing down the line, He keeps several customers ahead to stay on top of burger-frying time. “Clam fry,” I said. “And an order of onion rings.” The counterman shouted over his shoulder: “Jerry fry! Indian!”

That’s the Jumpin’ Jack’s order shorthand. “Indian” dates from a time when a french-fries-and-onion-rings combo was available, and was known to the kitchens as “French and Indian.”

Drew ordered next, with a Jackburger and fries. “Jack roll! Spud!” The rolls are dropped into a steamer, zapped with steam, and returned to the grill. The Jackburger is a two-patties-with-slaw rig that puts to shame similar concoctions at the plastic places.

Paul went all out with a steak sandwich, hot dog, and rings. “You want everything on that steak?” he was asked. When he assented, the order was given: “Loaded pepper steak! Dog roll! Indian!”

We picked up sodas as we slid our trays along the counter and paid at the other end. Don’t forget to tip the cashier: you’ll find the gesture is appreciated by everybody. Subway!

Lanky, affable Mark Lansing has been manager for 18 years, owner for the last two, “But we’re in our 32nd year of business,” he says. “We’re older than the McDonald’s chain.” He is familiar with the various explanations of the Jumpin’ Jack’s ordering shorthand (he isn’t so sure about that ‘’Indian” story mentioned above, and suggests it may be the result of shouting “onion” quickly). The one term that escapes him is “subway.” “They were saying that long before I got here,” he shrugs.

It was too early in the season for the sparrows to be bathing in the sand alongside the parking lot, too early for the sunbathers to be out in force. But we took a picnic table at the far end of the lot to keep an eye on everyone and noticed that, despite the McDonald’s that squats just down the street, the Jumpin’ Jack’s business already was booming.

Reviews for “Byron’s Blue Plate Special” are written after Byron finishes dessert. Before that, he picks a place, tells the owner when he’s coming and mentions that a) he expects to be wined and dined like royalty, and b) he doesn’t plan to pay for any of it. Your dining experience will no doubt be under dissimilar circumstances, but don’t let that stop you from visiting the fine establishments surveyed In this space.

JUMPIN’ JACK’S • Collins Park, Scotia • 393-6101. Open April-October, 11 AM-9PM until it gets warmer, then open until 11 PM every day. No bar, catering music or the like, but you can make your own banquet. [Credit cards weren’t accepted back then; they are now.]