Art Isn’t Easy Dept.: What I feared would be another police procedural tome turned out to be a fascinating look at international art theft – and the difficulty of its recovery.

IT STARTS CONVENTIONALLY ENOUGH, with undercover FBI agent Robert Wittman, narrator of the book, being Rolls-whisked by mobsters to a boat in a Miami dock, where he’s engineering a dangerous double-cross in order to get at a cache of stolen goods. The stakes are high, the personal risk daunting. The chapter breaks off at the climax. direction. We won’t learn the resolution until the final chapters. 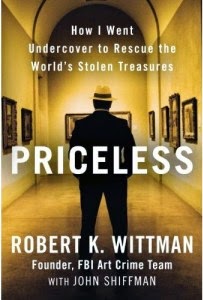 Where this book departs from the standard true-crime saga is in its subject matter – fine art. And not just that: it’s Wittman’s contagious belief in the cultural value of fine art that makes the book compelling. Co-written with Pulitzer Prize finalist John Shiffman, a Philadelphia Inquirer reporter, Priceless is Wittman’s story both of the high-stakes pursuit of stolen treasures and his own eventful life.

The product of a mixed-race marriage, Wittman had a close-up view of intolerance even as he watched the civil rights confrontations of the 1960s unfold. His Japanese mother helped instill his love of fine art; his army-vet father taught him resourcefulness and determination. Impressed by a neighbor who worked for the FBI, Wittman nourished a desire to join the bureau – but he settled into a family business and didn’t pursue that dream until he was 32.

His first posting, to Philadelphia, coincided with a robbery at that city’s Rodin Museum, and rookie Wittman launched into an investigation that would inspire not only a new attitude at the agency, but also lead to the founding of the FBI’s art crime unit.

Wittman himself gained significant training at the Barnes Foundation in Philadelphia, a building designed by its wealthy benefactor as an education center that immerses its students in art history. “Study the overstuffed walls,” the book explains, “and discover two chairs that match the female derriere in a set of Renoirs, or an African mask that matches the shape of a man’s face in a Picasso painting. Notice a wooden trunk that mimics shapes in Pendergast and Gauguin paintings. Ponder the significance of a set of soup ladles straddling a series of Old Master paintings, or a pair of ox shoes hanging over a pair of Soutines.”

In this way, the eye of the investigator – or collector, dealer, or artist – is trained to contextualize a masterpiece with greater skill. And it wasn’t just paintings Wittman recovered. In 1997, working undercover, he went after a 1700-year-old South American “‘backflap,’ the backside of an ancient Moche king’s body armor, an exquisite piece hammered from gold” stolen years before from a Peruvian tomb.

When the Historical Society of Pennsylvania took its first inventory in decades, a Revolutionary War-era rifle and three Civil War presentation swords were discovered missing, and more losses soon were discovered. This was the case of an inside job, and investigation made all the trickier because “cultural institutions are loathe to suspect one of their own; they like to think of themselves as families.” But it led to a multi-million dollar stash of 200 museum-worthy pieces in an electrician’s bedroom.

Wittman frequently went undercover, spending months winning the trust of the suspects he pursued, and the stories are rich with the kind of tension-building detail you’d otherwise assume only happens in fiction, such as the sting he set up to wrest an invaluable original copy of the Bill of Rights from a Washington, D.C., lawyer – bringing to an end a pursuit that began when the document, presented to the state of North Carolina, was looted by members of Sherman’s army during the Civil War.

There are successful recoveries of other goods stolen long before, such as the repatriation from Brazil of Norman Rockwell paintings swiped from a Minneapolis gallery in 1978. Other international trails include the track of Rembrandts and Renoirs nicked from the Swedish National Museum in Stockholm.

And, as if we didn’t know, we learn of the deliberate scams that informed the early seasons of TV's Antiques Roadshow.

Not surprisingly, that FBI culture also included the kind of politicking and backstabbling that informs any bureaucracy, and (now retired) agent Wittman was buffeted among co-workers and bosses ranging from those sympathetic to the need of protecting cultural artifacts to those desk-bound buffoons who merely sought self-aggrandizement at the expense of others.

But the most compelling aspect of this well-told saga is the excitingly detailed skullduggery: the suspense of each investigative chase and the eventual triumph (in most cases described) of running the thieves to ground and restoring the swag to its proper place, all burnished by the appreciation of fine art as a necessity of a culture that seeks to grow and thrive. When financial times are tough, the arts tend to take the first and most brutal hits. Wittman’s story is compelling argument against that.