The Once and Future Pete

Happy Birthday Dept.: Pete Seeger turned 94 today. In a few days, he’ll be performing at Proctors Theatre in Schenectady. He seems ageless and tireless, and his push to get people singing has inspired, in my town, a monthly get-together at which a potluck supper is followed by a round-robin of playing and singing, with many of the songs somehow related to Seeger as singer and songwriter. The first album reviewed below, a two-CD Seeger tribute, was followed by two more, similar, releases.

The last track of disc two of the Seeger tribute features Pete himself, his voice reedier and more quavery than we’re used to hearing (if we haven’t heard him lately). “And Still I Am Searching,” he sings, and it’s yet another affirmation of personal hopefulness, this one much more personal than most.

It’s a fitting though melancholy finish to a collection of nearly 40 songs that Seeger wrote outright or had a hand in developing, put together by former Ralph Nader assistant Jim Musselman, founder of Appleseed Recordings.

Seeger was responsible for a slew of hit songs once upon a time, and you’ll find new versions of them here. “If I Had a Hammer” is sung here by Nanci Griffith and a chorus that grows in number with each refrain; Roger McGuinn reprises “Bells of Rhymney”; Bruce Cockburn offers an unaffected “Turn, Turn, Turn” and the set leads off with “Where Have All the Flowers Gone” featuring Tommy Sands and Dolores Keane with cello obbligato by Vedran Smailovic, best known for his televised playing on a street in Sarajevo as mortar shells fell. Certainly an appropriate gesture for a Seeger-like sensibility. 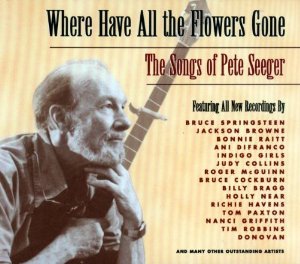 Trust me: someone you really like is performing on this set, and you’ll make some new friends, too, among the performers. Amazingly, the roster is almost completely different on “What’s That I Hear?”, the two-CD Phil Ochs tribute. Tom Paxton, Billy Bragg, John Gorka and Peter Yarrow are among the few in common, so look for still more new and old friends as you enjoy fresh interpretations of songs that aged better than you might have suspected thirty years ago.

During Ochs’s brief, troubled life, he turned out some of the finest protest songs of the era, along with beautifully crafted ballads of love and introspection. He also tended to get self-consciously mystical-poetic, pursuing a Moody Blues-Incredible String Band groove, with occasional flashes of anger-fired rock and roll. 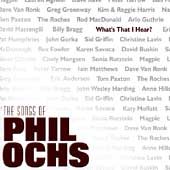 But the 28 songs on the new anthology prove that Ochs’s songs have far sturdier staying
power than you might have guessed just from hearing his own recordings. David Massengill handles his brooding, difficult “Crucifixion” with rare insight; Iain Matthews does a beautiful version of “Flower Lady,” and the a cappella setting of “The Bells” by the Roches is worth the price of the set.

Specific events that fueled the songs may be behind us, but we need a sense of protest more than ever these days. Both of these sets remind us of the craftsmanship of the not-so-old songwriters while reassuring us of the power of some very up-to-date performances. 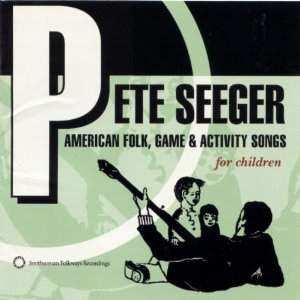 Never mind the kids, these two singers have such compelling voices that I’m prepared to drop everything and listen. I might even kick up my heels in a Virginia reel.

Seeger’s voice is so direct and honest that I never tire of listening to him; Dyer-Bennet brings a more rarefied sound to the genre, with more sophisticated accompaniments, but he, too, never fails to let the fun of the songs come through.

Take “Frog Went a-Courtin’,” which is common to both CDs. Seeger makes it a sing-along, even dropping out the accompaniment to persuade listeners to join in. So I shouldn’t have been surprised to hear my daughter’s voice, in the backseat of the car, do just as she was invited (although bashfully). In Dyer-Bennet’s hands (and voice), it’s a little more haunting, but still replete with appropriate sound effects. 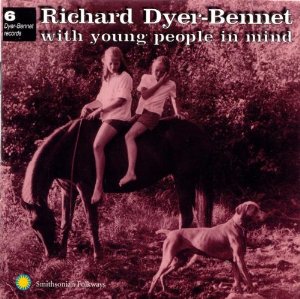 Originally two LPs, the Seeger CD combines eleven songs that the singer drew from a collection put together by his stepmother, Ruth Crawford Seeger, with eleven “play-party” songs like “Skip to My Lou” and “Ring around the Rosy” that include dance instructions in the program notes.

Dyer-Bennet’s collection was originally volume six of the 15 albums he released on Folkways. The story-songs, more familiar to kids of earlier generations, are a solid part of the English-language folk tradition and Dyer-Bennet’s easy way with the songs artfully maintains that timelessness.

Don’t think audiophile here: these recordings are 40 to 50 years old. They stand up well – your brain filters out the tape hiss after a while – and prove that you don’t need pristine sound to incite the imagination. Get these to play for your kids, but be prepared to be drawn into them yourself.