From the Classical Vault Dept.: Here’s a piece I wrote for the Schenectady Gazette, one of a series I came up with to prove my worthiness for a column in that newspaper’s pages. The column never happened, so here is this essay’s first appearance.

IT HAPPENS AT ALMOST EVERY high-powered classical concert I attend. The music heads for its finale, the tension mounts at the coda, the last note is sounded – and someone in the audience has that “Bravo!” out so fast it even frightens the musicians.

This isn't a gesture born of enthusiasm. It's snobbery. 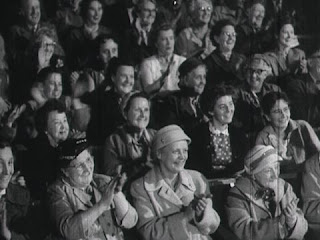 My favorite bravo-shouting display occurs when an unfamiliar work is played, so the shouter has a chance to say, “I know when the piece is ended.”

Also implicit is the idea that the shouter somehow enjoyed a richer experience than you or I, so lofty is this person's cultural level.

I know the truth, and I'm going to share it with you. Because I'm a reformed bravo shouter. It begins with too much free time in high school. And not nearly enough dates. Had I been able to date regularly during those four years, I guarantee that I wouldn't be able to whistle the themes from every movement of the Beethoven symphonies. It's a feat that has won me no money, no fame, not the slightest approbation from family and friends.

All it did was enable me to show myself as somehow more hep than the other kids in 11th grade music appreciation, most of whom were imprisoned in the class by what had seemed to be an easy elective.

Wait: it gets worse. I didn't just know the themes. I made faces to them. When the teacher wasn't looking, I'd do what I thought was this hilarious Jerry Lewis bit and mug along with the music.

No wonder I wasn't going out on dates much.

It helps to have a friend, similarly socially handcuffed, to make you feel like you're not a total freak. There were always a couple of kids hanging around the band room, kids who voluntarily played unnatural instruments like the euphonium. These were my buddies. We'd listen to records together. Not Moby Grape or Strawberry Alarm Clock. We had the latest from Charles Munch and Bruno Walter.

We convinced my father to take us to Carnegie Hall to see Stokowski conduct. Going from bedroom phonograph to auditorium wasn't just an acoustical improvement: it gave me the opportunity to show off my knowledge before a much larger audience, in voluntary attendance.

I learned there that the Jerry Lewis routine doesn’t play well on 57th Street. For one thing, people were watching the old Maestro, not me, and those whose peripheral attention was grabbed by my face-making weren't at all amused. So I saved it up for the finish.

The first piece was something pretty innocuous – Ravel's La Valse, if I remember correctly. It ends with a big five-note flourish, and I was out of my seat with a big, kid-voiced “Bravo!” right at that instant.

I honestly thought the people around me were impressed by my wisdom. “That young man knows his stuff,” I imagined them whispering to one another. “Even if he doesn't date much.”

Dad delicately tried to yank me from that cloud, asking if it wasn't more seemly to begin the appreciation-show by applauding in my seat. I took it be the usual dad-like stuffiness. I kept up that behavior at further concert opportunities.

That’s when the Phantom Bravo Shouter came on the scene. It happened in the halls around Fairfield County, Connecticut, where I grew up. At every concert I attended, he was there, beating me to the bravo. There was an unspoken rule that we mustn't actually overlap the final beat; the trick was to get that bravo out the moment the sound began to decay.

He was good. I was angry. Humiliated, in a filled-with-myself way. I took to studying scores of music on upcoming concerts to know where that final note would fall.

Then the miraculous occurred. I got a date for a concert. It was thrilling to sit beside this special someone and drink in the sight of her drinking in the music. I even – and this is mark of the impression she made – forgot to bravo.

The Phantom didn't. He was right there, split-second perfect.

“Did you hear that?” my companion said. “What an idiot, trying to show off like that.”

That put an end to my bravo career. And I advise the fanatics in the audience around me to follow my example. I subsequently began to date regularly. I got married. I never attend concerts alone.

Unlike, I suspect, all of those Phantoms.