Go Ahead and Usenet

From the Tech Vault Dept.: Once again from way back when, here’s my 17-year-old attempt to explain the Usenet phenomenon for readers of the amazingly puerile and deservedly short-lived magazine Yahoo! Internet Life. Although I tried to give the piece a fairly upbeat, easy-to-read (meaning: no hard words!) feel, some witless editor dumbed it down even further. Here’s my original piece. So much has changed since its publication that I’m not going to attempt to update it, but it’s well worth investigating for the richness of resources it offers, including binary files.

WANT TO TALK ABOUT David Letterman? You could visit his home page, but there’s no opportunity there for fan feedback. Over in the Internet’s Usenet newsgroups, however, there’s a group called alt.fan.letterman, and it exists solely for the purpose of trading stories about your favorite TV host. 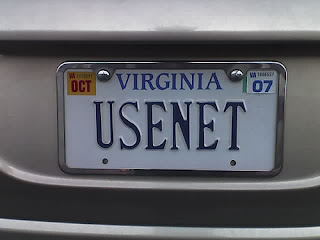 Usenet is an Internet realm dedicated to exchanging messages. Order is imposed by a hierarchical structure in which specific groups are named by discussion topic, and by the efforts of the Usenet community to ensure that messages from rambunctious individuals don’t get out of hand or stray too far off-topic within a given group.

Assuming your interests aren’t too outré, there are Usenet newsgroups devoted to them. And you can find plenty of wacky ones out there, too. Want to keep up with Jeeves and Bertie Wooster? Go to alt.fan.wodehouse. Getting married soon? Do some research in soc.couples.wedding. Do you fear nothing? Try alt.acme.exploding.newsgroup.

Thousands of groups – I counted 18,479 last time I looked – are out there, and more are added daily. The easiest way to study a megalist of the whole shebang is to download it through your browser. Use the newsgroup component of an Internet software suite or special newsreader software, as well.

Newsgroups have a hierarchical naming system, with each name element separated from the others by a period. A group called alt.fan.letterman means it’s in the alt (alternative) hierarchy, which is where the more happenin’ subjects show up. . . or at least the more happenin’ takes on common discussion topics.

comp (computers): covering a broad spectrum, but firmly propeller-headed.
rec (recreation): also includes the arts as well as hobbyist concerns.
sci (science): from astronomy to virtual worlds.
soc (sociology): discussing the cultures of many countries.
misc, for really weird stuff.
news, for Usenet-related postings.
And there are many, many more.

People are passionate in their opinions, which makes the newsgroup interesting. And you’ll find postings with which you passionately disagree. Before you offer to remove some Jay Leno fan’s lights and liver, however, check out the guide to good manners (it’s known here as “netiquette”).

How can I get in on them?

You need a newsreader – different from a Web browser, although your Web-crusing software should have a newsreader built in. AOL users can click the Internet button, then choose Newsgroups. Compuserve has its own Usenet gateway; type GO USENET and choose the newsreader.

In order to submit (post) messages and follow ongoing message threads, you have to subscribe to a newsgroup. Most newsreaders give you an option to read a complete list of the groups. When you consult the AOL newsgroup list, however, you won’t be shown the naughty ones. Use Expert Add to type in the names on your own.

Once you have added the newsgroups that catch your interest to your subscription list, you’ll be shown new messages in only those groups. And most newsreaders automatically show you only what you haven’t read.

Beware, however, that these newsgroups are more addictive than the Web. I’ve found old friends, been found by an old friend, learned of must-see concerts, filled gaping holes in my record collection, and secured valuable health tips through various newsgroups, and my subscription list is starting to look like the Publisher’s Clearing House catalogue.

Netscape has a built-in newsreader. Access it by pulling down the Window menu and selecting Netscape News. By default, you’re shown only a couple of newsgroups. With a fast modem and a
little patience, you can get a complete list of newsgroups. While online, pull down the Options menu and select Show All Newsgroups. The list is collapsed--to examine, for example, the alternative newsgroups, click the plus sign beside the alt heading and watch it cascade open into more than 3500 groups. Subscribe to a group by clicking the checkmark box beside it.

The upper-left window lists the newsgroups you’re reading and the upper-right window lists messages within the selected newsgroup. Highlight a message and the lower window shows its text. Make sure that Show Subscribed Newsgroups remains selected in the Options menu, along with Show Only Unread Messages. Highlight a message to read it; respond by clicking the Re:News button on the Netscape toolbar.

Microsoft Internet Explorer needs the Mail and News add-on, which runs as a separate application. It lets you download a complete newsgroup list (pull down News and select Newsgroups), presented as a straight list, with descriptions, in a separate window.

Select each newsgroup you’d like to subscribe to with a double-click. The main window shows one newsgroup at a time, but a pull-down arrow beside the newsgroup name lets you move among your subscription list. Message headers, arranged by message thread and date, show in the large top window. The text of a highlighted message displays immediately below. Respond by clicking Reply to Group at the left side of the screen and a separate window opens for your new message.

1. Do I have access to all of the Usenet newsgroups? (Some of the racier areas
are hidden or blocked by various service providers.)

2. Do I want my kids to have access to all of the Usenet newsgroups? (See above. On the
other hand, you may prefer those blocks.)

3. Am I searching for my subject creatively enough? (For example: Stephen Sondheim fans will find more discussion about the songwriter on rec.arts.theatre.musicals than on alt.music.sondheim.)

4. Am I re-reading old messages? (Make sure your newsgroup browser is set to show you only unread messages.)

5. Am I sticking to the subject? (A certain amount of free-associative latitude is expected, but your paeans to Jay Leno may belong in alt.fan.jay-leno rather than the Letterman group.)

6. Did I re-read my message? (You don’t have to spell well to use a computer, as a tour through most Usenet newsgroups will show.)

7. Have I thought carefully about sending this angry message I just wrote? (Even if it’s spell-checked and well-written, a hot-headed message most often ends up looking stupid after you’ve calmed down.)