The Touches of Sweet Harmony

ONCE I DISCOVERED classical music, I was ineluctably set on a path that would keep me free of the ties of mainstream anything, particularly its so-called culture. Don’t get me wrong: I’m not a total snob. But at least three-quarters of me is suffused with a snobdom that I do try to hide when I’m out in public. 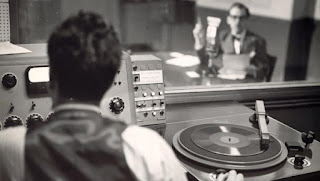 In any event, as a cash-strapped teen, my main source of music became the radio, and in the New York metropolitan area, there were three stations broadcasting fairly full schedules of the stuff I wanted to hear. WQXR AM and FM, the “radio stations of the New York Times,” as it was styled back then; WNCN-FM, which lived in its own rarefied universe; and WNYC, which was a Public Broadcasting affiliate, and thus required to add news and public affairs programs to its roster. (WRVR, WKCR, and WFUV sometimes aired classical works, as did Bridgeport’s WJZZ, so don’t complain that I’ve overlooked them.)

And there was a booming yet dulcet voice that issued from the speaker late at night over WQXR, and then on WNCN, and then on WBAI, depending on how fed up any of those stations had grown with Bill Watson. And vice-versa. He was peripatetic. He was opinionated. He was devoted to Walter Gieseking and Jussi Bjoerling, among others, and was inclined to favor their recordings, often in marathon sessions.

“Listening with Watson” opened with the quiet strains of the second movement of Mozart’s “Eine Kleine Nachtmusik,” over which he murmured, “Here will we sit and let the sounds of music creep into our ears. Soft stillness and the night become the touches of sweet harmony.” Ordinarily, I’d check the source before posting this (“Merchant of Venice,” if you’re curious), but I’m quoting from memory and will let it stand in tribute.

Late one night I heard Watson interrupt a recording of Purcell’s “Dido and Aeneas,” saying, “This is too depressing,” and go on to play Mozart’s “Musical Joke.” His between-the-pieces discourse could be lengthy and discursive, yet sometimes he let one piece run into another, especially if it was, say, Gieseking playing a series of Mozart sonatas.

Watson doesn’t have much of an internet presence that I can find. His NY Times obit ran in 1992, when he died at age 77, and contains such gems as, “Once he played Bach's ‘Well-Tempered Clavier,’ a piece about four hours long – then promptly played it again. During a tiff with management, he lowered the volume on the commercials until they were inaudible.

And: “He often read poetry and literary works. Occasionally he read the news, adding a passage from ‘The Rise and Fall of the Roman Empire,’ introduced as a dispatch from Edward Gibbons, ‘our Roman Empire correspondent.’”

I’ve been unable to find any recordings of Watson in action, so I found an old cassette I recorded in 1979, when he was doing Friday night shifts on WBAI. He had just finished reading aloud, over a series of many weeks, Daniel M. Pinkwater’s novel “Alan Mendelsohn, the Boy from Mars,” and we pick up as he gets the author on the phone for a celebratory interview.