From the Soapbox Dept.: I suppose it was those first few years of concert-reviewing that inspired the piece below, as I was confronted with the appalling sameness of one classical-music concert after another. Now, twenty-four years later, most of my working days are spent with music in the background. But at least it’s music I chose to semi-listen to.

MUSIC HAS THE CAPACITY of being the least instrusive of the arts. That gives it the potential of being one of the most manipulative. Thanks to decades of proper conditioning – conditioning we’ve undergone since birth – we are no more aware of such manipulation than we are of our breathing. (Until a more obtrusive purpose is required and the political thrust of a hunk of music is made obvious. You know the sound of a protest song: it sounds stirring and is excitingly fun to sing.) 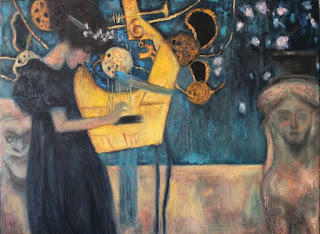 The musical identity of this country has its fussy heart in a generation-to-generation revision of values signified by the evolution of a tangled vine of musical stylings. It began at the beginning of the century, when jazz unseated the dry huffings of a boring crew of classical composers (slaves to a European tradition), and it ended with the end of the folk-song boom of 20 years ago.

Significantly, we’re once again listening to what the Europeans are saying – if we’re listening at all.

Continuity of music is found in celebration; change is fueled by rebellion. More drastic musical change was effected in the United States during this century than anywhere else in the world over any given time period, yet it’s a history so fraught with compartmentalization that a view of any appreciable scope must be sewn together from scattered ingredients.

Simplistically, the roots of jazz lurk in the Southern slave practice of telling the master to go to hell in polite-sounding Gospel settings. This reaction to oppression – later echoed in the IWW protest style of the early unionizing days – gave birth to further reactions each time white society attempted to marshal an impatient musical force.

Take the be-bop movement of the 1940s, which paralyzed the white bandleaders who were making a populist mush out of swing. The rebellion continued as rhythm & blues was parlayed into rock a decade later, and as aged Wobblies found their cleaned-up anthems climbing the pop charts a decade later still.

Domestic classical music continues to wither on the vine in spite of small pockets of activity. A recent Time magazine article threw the last shovelfuls of earth on the dead issue of symphony orchestras, a Romantic-era conceit still conceited enough to pander to the claques of wealthy cliques who think there’s something socially important to gain by supporting the music of dead composers.

Any usefulness such music may have as a political entity is canceled because it’s been reduced to a spectator sport. And anyone who’s witnessed a concert can tell you it’s not very exciting to see – unless you’re studying your neighbors. And even then it’s no good if you’re not in an exclusive club.

We crave culture that’s viewable. As we relax into an auditorium seat we become vulnerable to the dramatic devices employed by play or film. One of those devices is music.

Movies have proved that the combo can be devastating when used effectively. How often was the stirring brass of a cavalry charge contrasted to the dumb-sounding tom-toms of the Indians? Such conditioning plants an image of the opponent as dimwitted inferior.

Spike Jones ridiculed the German oompah band in his wartime hit “Der Fuehrer’s Face,” which was then broadcast ceaselessly into enemy territory. It was a quick, effective way of trashing a culture’s heritage.

The union organizer in this country used that tool a different way. Counting on a worker’s familiarity with popular hymns, a new set of lyrics not only were easy to sing but had the added comfort of a religious ritual. And there was power in a mass of disgruntled strikers all joining in anti-boss songs.

Another facet of musical manipulation was discovered during World War II when factory production was caused to increase by its judicious use. Studies were made, a company was formed – and Muzak was born, the most insidiously diabolical use of music ever committed.
A pattern of 15 minutes on, 15 minutes off proved effective in the workplace. A solemn tune after lunch helped kill an employee’s postprandial excitement; later in the afternoon, when the slump hit, that employee would be subjected to a brighter piece.

Now the background music is carefully designed to stimulate supermarket sales; calm airplane passengers awaiting takeoff; draw the department-store shopper’s attention to a particular featured item. A committee of psychologists and musical consultants meets annually for the Muzak Corporation and plots the tempos, arrangements, volume, order, and so forth of the ingredients, which then are specially recorded for the company.

Obviously, it’s simple to use music as a vehicle for another idea: as visual or lyrical accompaniment, as a chant of protest, as a parody. In its purest form, the politics of a given piece of music must be found in its psychology, as the Muzak professors discovered. Behind that is the pleasant assumption that most of us will react in a similar emotional manner to a given sound; the most effective works in the classical repertory are those which control the emotional journey they invite us along, mixing pleasant melody with tense variation, suggesting shock and surprise in careful doses of triumph and suspense.

Music loses its usefulness when there is no longer that capacity to trouble the listener. Many symphonies by Haydn were outrageous in their day; now, unless an auditor is able to convincingly pretend a return to the sensibility of his century, the symphonies become only a pleasant background noise.

Contemporary composers are faced with an audience too frightened to confront the unusual, and are too often forced to retreat into academic surroundings, sharing new works only with like-minded colleagues.

Like the cocaine-addicted rats that eventually give up food in favor of the drug, the modern audience craves the candy of music. It has been manipulated into this torpor by an abundance of unhearable backround stuff, and satisfies the need with the worst excesses of musical mindlessness.

An entire vogue, dubbed “new age,” has been created out of this craving, giving phony dignity to the sleepy meanderings of soulless performers. It’s a bad tendency to encourage: there’s nothing there to celebrate, and no desire to rebel.