Something to Believe In

From the Food Vault Dept.: After the demise of Albany’s Metroland Magazine, there was a short-lived pseudo-alt-weekly that was published for a while under the hopeful name of The Alt. It had none of the alternative-news sensibility one expects from such a paper, and it was further hampered by its editor’s very limited cultural intelligence. I wrote some pieces for the mag during its brief existence; here’s one. As of this writing, the Iron Gate continues to thrive.

IT WAS AN UNLIKELY BIRTH for a restaurant. “I’ve always related to the Ramones,” Kevin Dively explains. “I bought my sister one of their albums for her birthday when she was, like, ten – because I wanted it – and it changed my life. I mean, at the time, what was the music out there? And here are the Ramones! So me and my brother and a neighbor decided that we could do this, and we started a band.” 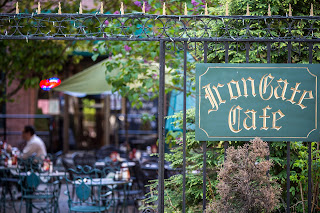 Which meant he didn’t fit well into the nine-to-five employment paradigm. “When you’re doing the band thing, the one job you can always get is a restaurant job. So I bounced around a lot of restaurants.”

Meanwhile, his parents had bought and restored a four-story Victorian mansion in downtown Albany, the onetime School No. 10 that was owned by industrialist James Holroyd in the 1890s. The single-family structure came with a small office space attached, “but the people in there moved out because there wasn’t any parking. My dad didn’t know what he was going to do with it, so I said ‘Let’s put a little sandwich shop in there.’”

Dively was running a nearby deli at the time. “It was a to-go deli for state workers. We were doing pretty well, and my boss would come in at the end of the day and grab the money and say, ‘Good job.’ So when the space opened up I said, ‘I can do this.’”

There were objections. “We had a reputation back then as, maybe, partiers, so everyone was saying, ‘These guys are going to screw it up.’ But fifteen years later, here we are.”

The Iron Gate fronts a busy stretch of Washington Avenue, taking its name from the gates that welcome you within. What started as a simple breakfast joint has grown into one of the area’s favorite breakfast-and-lunch eateries, with lines for the weekend brunch a testament to its popularity.

“When we first opened,” says Dively, “the place didn’t look anything like it does now. The patio wasn’t there – it was just a sidewalk. We were only open a couple of hours a day, Monday through Friday, and right off the bat we were pretty busy. As it built, we started doing weekends – and even my dad said we were crazy to do that, there are no businesses around here on the weekends, no-one will come in. But I was thinking, I go out to eat on the weekends, and a lot of those places aren’t very good, yet they’re all busy! At first it was me and one waitress and one other cook and we’d do a couple hundred bucks and that was a good day – and now we do 500 people on a Sunday!”

Among the popular breakfast items are the John Denver (grilled cornbread topped with scrambled eggs, bacon, and pepper-jack hollandaise), stuffed French toast (two slices of Texas toast stuffed with a fried egg, cheddar, and choice of meat, and Elvis’s Memphis Scramble (three scrambled eggs with bacon, maple sausage, peppers, and onions topped with melted pepper jack). The Garden State gives a meatless alternative, with veggie sausage, avocado, peppers, onions, tomato, and pepper jack cheese scrambled in a wrap and served with fruit. There’s a selection of variously configured salads, a variety of homemade soup, any number of deli sandwiches and wraps, and even that most comforting of offerings, grilled cheese. The quesadilla gives you Monterey jack melted inside a grilled flour tortilla, while signature sandwiches include curried chicken, Italian mix, a turkey-cheddar-apple combo dubbed the “Vermonster,” and a roasted-turkey BLAT (“A” for avocado) with pesto. Vegan items include a black bean burger, tofu scramble with spinach, and a seitan breakfast sandwich with Daiya cheddar.

“Our menu has evolved over the years,” Dively notes. “We come up with ideas, and things that do well, we keep. I’m a food person, so I eat out a lot, and if I get something I like, I’ll play around with it.” But he’s moving into a more food source-conscious approach to the fare. “I just bought a cow from Sweet Tree Farm in Duanesburg, so our roast beef today is from that. And this also means that you’ll be getting your burger from a cow that lived 30 miles away
in a field and was only fed grass. I just ordered a pig for making sausage from the Adams Family Farm outside of Troy, and I’m also getting eggs from them now.

“I’m into what’s local and healthy now because I have two kids, and one son is three and he likes pulled pork – so I want it to be from a good, healthy animal. There’s a difference in flavor, and the customers notice it.”

One of the Iron Gate’s other attractions is its outdoor dining area, a beautiful patio built around the entryway. “It wasn’t there at first,” says Dively. “I have a friend who’s a landscaper, so we talked about it for a while and then, a couple of years in, he brought a couple of buddies and I worked with them to put it together. And now it’s what we’re known for! We were just voted one of the best outdoor dining spots in the state of New York, and we’re up there with places in resort areas, so I’m excited about that.” (The story is at newyorkupstate.com.)

The serenity of dining there has been threatened by a CDTA plan to consolidate bus stops in the area, a move which the outspoken Dively has opposed, with mixed results. “They painted us as if we thought we were too good for the bus, which is not true. I’m not against the bus – I take the bus to work. My wife and I share a car, so I take the bus all the time. What I’m against is that they wanted to put a massive stop right in front of our gate, where people dine outside. So there’d always be buses idling there, with all that noise and fumes. A little bus stop, sure, I can deal with that – but they want to put in a hub that combines six or seven bus stops.”

Although announced in late 2015, the proposal has yet to be implemented, and Dively believes it may have changed. “What I think they’re doing is putting the massive bus stop across the street, and putting the one on this side a little further down, which I have to live with. But I’m not against CDTA, I’m not against public transportation – but I’ve spent fifteen years building this business, and the patio is a big part of it. People like to sit there and enjoy their lunch and listen to the music we play.”

Dively remains a music person. When he’s in the kitchen: “We listen to a lot of Ramones. And there’s a weird thing that if we’re having a slow day, not many customers, we put on some Elvis and it seems to bring them in. We have a back dining room that’s dedicated to Elvis, so I don’t know if it’s the Spirit of Elvis helping us, but it seems to bring people in. Elvis puts everyone in a good mood.”