From the Operetta Vault Dept.: Looks like the Bard Summerscape Festival will be back on its feet this summer (2021), and I look forward to learning more about the life and work of sisters Nadia and Lili Boulanger. Meanwhile, here’s a look back at a production there of the rarely seen “Chocolate Soldier” in 2010.

IN THE BUILDING’S LARGER THEATER, the final acclaimed performance of Franz Schreker’s 1910 opera “Der ferne Klang” sent singers scurrying past, their faces grotesquely painted. But with an August too clogged to allow me to see both of this season’s operas, I succumbed to the part of me that likes froth and happy endings and sentimental tunes. 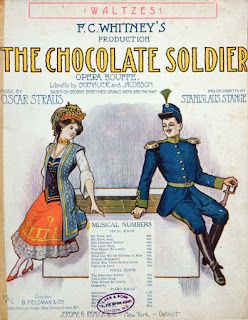 I hitherto only knew “The Chocolate Soldier” as a punchline, a payoff for a gag involving forgotten musicals if “The Red Mill” or “Naughty Marietta” won’t due. And I swear to you, during the drive home I was listening to a 1966 Jean Shepherd radio show in which he described dining at Manhattan’s Plaza Hotel, in a room that “featured four very proper musicians ... playing things like selections from ‘The Chocolate Soldier.’”

Bard’s Summerscape mission is to bring you the little-seen and rarely heard, and director-choreographer Will Pomerantz did another commendable job in putting this on the stage. As was the case with his production two summers ago of the Gershwin musical “Of Thee I Sing,” he was working with a property that no doubt clogged the stage with chorus and dancers; this trimmed-down version made intensive use of the hard-working chorus: it’s impressive how adaptable women can be with the mere addition of a mustache or two.

The operetta is based on Shaw’s “Arms and the Man,” although Shaw completely dissociated from the piece and insisted on no royalty payments, a decision he must have later regretted.

Escaping Serb soldier Bumerli (baritone Andrew Wilkowske) is actually a Swiss pacifist who carries chocolates in his bullet belt. He hides in the bedroom of Nadina (soprano Lynne Abeles), whose father is a Bulgarian general and whose fiancé just won a battle against Bumerli’s Serbs – but won it only by chance, as Bumerli explains to the reluctant but very smitten young lady.

So sparks a plot of mistaken identity revealed and pomposity deflated and ill-matched lovers united with their proper mates. Songs like “My Hero” and “The Letter Song” must have sounded in the streets back when this operetta had its 1909 Broadway run; “Sympathy,” was a lovely duet for Bumerli and Nadina, whose voices shone throughout despite a fight against the unkind acoustics of the Fisher Center’s Theatre Two.

High praise also for mezzo Madeleine Gray as mother Aurelia, soprano Camille Zamora as the coquettish cousin Mascha, the imposing Jason Switzer as military man Massakroff, menacing the audience as well as the cast, and Matthew Kreger in the thankless role of the servant, Stefan, hauled in to round out the frequent sextet.

James Bagwell led a small ensemble of musicians brilliantly, a one-player-per-part orchestra that sounded as fin de siècle as you probably can get.