Are You Going to Finish That?

FIRST THERE’S A SMALL SENSE OF BETRAYAL. Mark Bittman’s cookbooks are reliable foundational items for any culinary collection, offering satisfying recipes described in a reassuring voice. His latest book, however, is almost an anti-cookbook insofar as it’s more or less an anti-food book. Animal, Vegetable, Junk looks at what have become the unhealthy dietary norms for most Americans, how they got that way, and what we can do to change it. 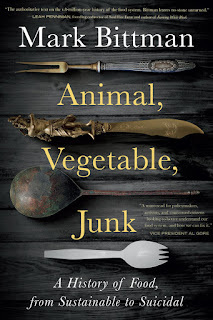 “Food drives history,” states Bittman, “and soil drives food.” His book-opening look at the history of agriculture is a fascinating journey through the millennia of evolutionary steps humans took to learn to localize their food production. And it sets the stage for the introduction of factory farming, which, among other nasty consequences, ruins the land beneath it.

In the mid-19th century, John Deere revolutionized plowing with a new design, better material, and a shift to retail sales, helping farmers with resistant soil break up their ground for planting. But this also was the beginning of an assembly-line attitude towards labor and production that served to increase yields (in good years, at least) even as the farmers who worked the land became less familiar with that land, thus less responsive to its needs.

“Before long, it took more land, more equipment, more chemicals, and more financing to become a successful farmer in the most prolific crops, like corn, soybeans, and wheat,” writes Bittman. “And as it developed, buying mechanized farm equipment did not guarantee prosperity, but rather debt ... ”

We’ve read the horror stories about farms collapsing under a mountain of money owed, and the heart-wrenching accounts of farmers driven to suicide. These turn out to be the side-effects of a wealthy corporate structure seeking, as always, more wealth. Starting with machinery sales. “Mechanization and growth made the farm economy more erratic, as more debt, more income, and more crops meant higher highs and lower lows.”

Financing the purchases of equipment, fertilizer, and seed became the key to a farmer’s potential success – and a millstone around the neck, crushing the unlucky ones under ever-mounting debt.

The relationship between chemical fertilizer and wartime ammunition helped step up government involvement with farming. And with military interests there to protect, government had a clear interest in getting involved in the fertilizer biz – and, by extension, all of food production. Bittman spends a chapter looking at how that involvement began and why it increased, beginning with a review of the various manifestations of serfdom through the ages.

The U.S. government got involved in a big way during World War I, putting nearly 14 million acres into wheat production – and setting up the country’s farmers for disaster when a dustbowl-inducing drought hit hard. The reliance on plowing had rendered much already-unhealthy soil unviable, and “the USDA’s failure to anticipate the dangers of the plowing frenzy is ... telling. Agents had little or no training in soil management, water conservation, crop rotation, or erosion protection – the very practices that might have averted the Dust Bowl crisis. Rather, they were champions of industrialized monoculture, encouraging mechanization and reckless planting.”

Nervertheless, we moved into the age of factory farming, bringing surplus foodstuffs galore. And the next stage of our culinary ruination began as new production techniques made a slew of invented (or re-invented) taste treats available. “Take the symbol of twentieth-century American eating: The cheeseburger. Topped with a flap of reduced and dyed milk paste (‘American’ cheese) and a generous drizzle of over-sweetened tomato jam (ketchup), then sandwiched in a sad simulacrum of bread, replete with painted-on ‘crust’ (the bun), the all-beef patty became iconic.”

The beef industry’s journey into industrialization is examined, with sidetrips to learn how your cheese and ketchup got to where they are today. But it also begins the story of convenience food, from Campbell’s soups to CIA-supported United Fruit, which helped the company exploit fruit-producing countries in Central America and beyond.

Mass-market chicken came our way as the number of birds produced increased, according to a 2008 study, by 1,400 percent even as chicken farms consolidated into squawking factories. “Drugs paved the way,” Bittman reminds us, as antibiotics allowed farmers to cram more birds into smaller spaces, “and profits rose even as retail prices stagnated or fell.” Chicken and burgers came together in a big way as the fast-food industry was born, reaching a culmination of sorts in the pandemic’s favorite invention, the drive-through window.

As refrigeration became a household necessity, frozen-food offerings appeared in the markets alongside canned food. And the markets themselves changed from the “may I help you?” model to self-service enterprises. Which, of course, gave rise to packaging and the science of “shelf appeal.” And what’s in those gaudy packages? Sugar, salt, and fat, which in reasonable amounts are components of the foods we need, but “the challenge lay in getting Americans to eat these foods in increasing quantities,” thus also making use of a plentiful surplus of food supplies. “The solution would come through selling Americans on chronic overeating of foods that would make them sick. And the marketing machine was up to that task.”

There has been pushback through the years, one of the most famous examples being the change inspired by Rachel Carson’s anti-DDT essay “Silent Spring” in 1962. The mighty USDA had long treated Black farmers and consumers with disdain, particularly in a 1964 food stamps program that kept such support out of the hands of those who needed it most, but that changed at least slightly in 1969 when the Black Panthers initiated a free breakfast program in Oakland, a program that quickly spread to 23 other cities. In response, the USDA found motivation to become part of 1975's School Breakfast Program.

But the onslaught of processed, bad-for-you foods has continued, and a healthy way ahead seems formidably difficult. We’ve seen product labeling, which is helpful, and the rise of organic foods in the markets. But in recent years, “Big Food absorbed sixty-six of the eighty-one existing organic processors ... If there was any promise of integrity in the mass-produced organic sector, it was destroyed.”

Not surprisingly, Bittman looks at the climate-change battle as a key element in the pathway to food health, noting that “Big Ag has a huge role in greenhouse gas emissions, even rivaling those of the oil and gas companies.” Although the Trump-blinkered EPA claims that agriculture is only responsible for ten percent of greenhouse gas emissions, Worldwatch says it’s more than fifty percent. So we need to get responsible people in those positions of authority. And there needs to be a change in the whole ethos of farming, in which responsible land use and soil conservation moves to the fore.

President Biden’s recent speech to the nation included acknowledgment of the need for cover crops, putting that concept in many people’s minds. Bittman lays out an approach to “agroecology” – a century-old term, as it happens – and how it needs to be practiced on an international scale. Which is already happening in other, poorer, countries, but will only begin to tug apart the strangleholds of Big Ag when the smaller practitioners grow larger and more vocal.

Animal, Vegetable, Junk is not always a pleasant read, but it’s most assuredly an inspiring one. Bittman brings well-organized ideas and well-researched data to his accessible prose, and, if the book discourages from that next trip to the drive-through window, it’ll help you make your at-home dinner plate healthy again.