From the Tech Vault Dept.: Here’s another tech oldie, my how-to about compiling a videotape from your existing footage by using a 1994 software program to supervise the jockeying through individual segments that are then transferred ... it’s exhausting even to write this. And I can assure you that the result was just as primitive-looking as the process suggests.

REMEMBER THE TORMENT of sitting through yet another slide show as Dad brutalized captive guests with scenes from last summer's beach trip? Every single shot he took was jammed into that projector, no matter how poorly cropped or focused it was. With one of those awful I'm-getting-too-old epiphanies, I realized that I've been inflicting the exact same pain on my guests, but the means of torture has changed. Today, they're forced to suffer through my videotapes. 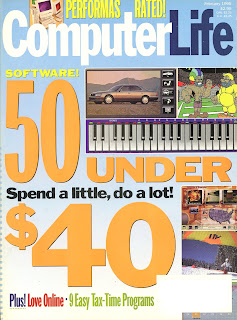 And every scrap of footage is intact. Every time I accidentally pushed the start button and filmed two minutes of floor tile. Every shaky sequence of passing scenery. Had I not been asked to write about VideoDirector, all my long-suffering friends would have had to buy it for me. I can't live without it now.

VideoDirector is an elegant product because it gives you the means to edit tapes with your computer without consuming your hard drive in the process. Since you aren't actually capturing video, the computer simply functions as a control center to aid in the editing process, miraculously compiling choice material from those teeming tapes into well-paced episodes.

I had already tried video editing with my camcorder and VCR; a good VCR can pause and resume quickly, but controlling the camcorder is much more difficult, especially when you're trying to tweeze a two-or three-second scene out of a sequence. Fortunately, some camcorders have a special jack built in that allows them to be controlled by another machine—which can be a computer.

All You Need is LANC

Sony developed a technology called the Local Application Control bus system, abbreviated as LANC and also referred to as Control-L. A LANC jack can be found on all Sony camcorders, as well as on 8-millimeter camcorders from several other manufacturers; the jack is indicated by a “broken-L” symbol.

Essentially, LANC is a two-way communications system that lets the remote machine control fast winds and varying-speed playback, while the camcorder sends the machine tape-position or time-code information. In other words, the right computer program can find a specific tape location and play only the segment you want, allowing you to dub a video of selected segments. Welcome to VideoDirector. Future releases of Video-Director will be targeted to work with other remote control camera systems, but for now you must have a LANC-compatible camera in order to use this product.

Because it doesn’t rely on fancy computer hardware, VideoDirector works with Windows or a Macintosh in much the same way. The Windows version allows you to add titles and animation to your tapes if you have a video encoder card; you can also add sound to the finished product if you wire the setup through your sound card. With a Macintosh, a Quick-Time-compatible digitizer lets you incorporate special video effects into your final edit.

I haven’t tried the titles and animation features yet—that’s the subject of another project—but it’s a good idea to practice the basics first and add more as you learn the system. I’m also trying to get my Dad to come over for a video show, but he’s been ducking the invitation. I think he fears I’m plotting revenge for all those boring slide shows.

Since rusticating himself in New York’s dairy country, freelance writer B. A. Nilsson’s daily routine includes tending his gardens, barns, and electronic gadgetry. After judicious editing, it now looks like a fascinating life. Photos by John Popplewell.

Do
•    Have plenty of work space.
•    Shoot extra footage—you’ll be cutting the dross.
•    Preview your edited tapes before a screening. 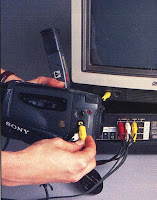 •    Try this if your camcorder is not LANC compatible.
•    Put equipment on top of your VCR; you’ll block the airflow.
•    Put your camcorder and VCR too near one another it they respond to the same remote control.

Plug your camcorder into your VCR using the cable that came with the camera. Run a cable (supplied with the VCR) from the VCR to a TV monitor. Test your connections by playing a tape in the camcorder. Hint: If your camcorder has mono sound and your VCR is stereo, you may be able to plug the cable into the VCR’s left channel input and have a mono soundtrack on both channels—some VCRs are smart that way. Otherwise, you should be able to get a Y connector at Radio Shack. 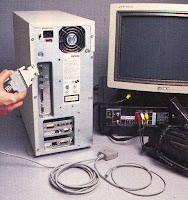 Step 2: Attach the Smart Cable to the Computer

The VideoDirector Smart Cable plugs into your computer’s 25-pin serial port. If your system is equipped with only a smaller 9-pin socket, use the 25-to-9-pin adapter that comes with VideoDirector, as shown here.

Step 3: Attach Your Camcorder to the Computer

At the other end of the Smart Cable is a plug that looks like the plug on the end of a Walkman headset. This is the LANC (or Control-L) plug, and it goes into the LANC jack on your camcorder. Most camcorder manufacturers mark the LANC jack with a “broken-L” symbol. 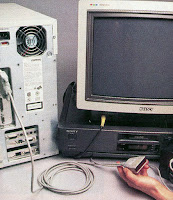 The remaining plug on the Smart Cable has a translucent red plate on it, because it’s an infrared remote control device much like the one that came with your VCR. First, locate the place on your VCR that receives remote control information—usually near the time display. Position the Smart Cable transmitter so it faces that spot on your VCR, but keep it a few inches away. Using the supplied Velcro strip, secure the transmitter in place.

Step 5: Install and Configure the Software 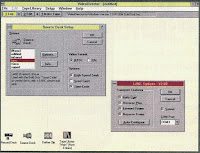 Start your computer and then insert the VideoDirector disk in the A: drive. From the Windows Program Manager screen, pull down the File menu and select Run. Type A:\SETUP and press Enter. The software will create its own program group and icons. After installation, double-click on the VideoDirector icon and choose Source Deck from the Setup menu. In the Drivers box, choose LANC. Because my camcorder writes time-code information to a tape, I also checked the Time-Code box. The Options feature lets you configure other LANC capabilities, although Auto Configure takes care of everything automatically. Finally, fill in the COM Port box; I entered COM3. Hint: If you select Sound from the Options menu, your computer speaker will beep helpfully each time the program sends a signal to your video equipment.

Step 6: Configure the VCR and Remote 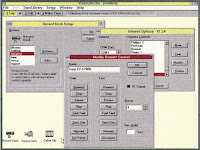 Choose Record Deck from the Setup menu. Under the Drivers box, select Infrared and click on Options. Because there are so many different types of remote controls on the market,  VideoDirector provides a long list of them to choose from, but you can bypass this by selecting New. Give your remote setting a name, and then pick up your VCR’s remote control. You’ll see two columns: Train and Test.

Under the Train column, select Play, point your remote control at the Smart Cable’s infrared plug (but not too close to your camcorder), and press Play on your remote control. Go through the entire list of training settings and zap them one by one. Hint: If the test response seems sluggish when you’re configuring the Remote Control buttons, change the Bursts setting to 3 or higher. This sends a longer infrared signal to your recording deck. 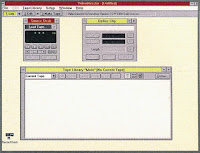 Insert a tape you’ve recorded into your camcorder and rewind it to the beginning. In the VideoDirector Source Deck window, click on Load Tape. Choose the New Tape option in the Select Source Tape window, and in the next window give your tape a descriptive name. Then click OK. Using the VCR controls in the Source Deck window, begin playing your tape. Hint: To make searching easier later, name the sections on your tape. Pause the tape at the beginning of a new section, select Section, and type in a name. 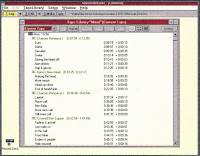 Go through your footage and decide what’s worth keeping. Play a section of tape until you find the point where you want to start the clip. Pause the tape and click on the Start button in the Define Clip window. Resume playing the tape, and when you decide where it should finish, pause the tape and click on End. Then type a descriptive name. VideoDirector will keep track of that exact clip. Hint: You can also use the space bar instead of clicking on the Start and End buttons. 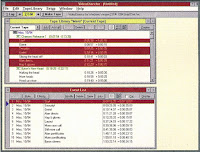 Here’s the fun part. Put a blank tape in the VCR. At the top of the VideoDirector main window, select Option 2: Edit. In the Tape Library window, choose the clips you want to transfer to a single tape. As you select them, they’re logged into an Event List window. Next, select Option 3: Make Tape. A pop-up Make Tape window confirms that you’re assembling all clips from the Event List. When you click on OK, the process begins automatically. The source tape is wound to the correct starting point, the VCR goes into record/pause mode, and, one by one, your clips from multiple tapes are transferred to a single edited tape. Suddenly your productions look slicker than ever.