From the Classical Vault Dept.: It was a rare treat to see and hear the Golub-Kaplan-Carr trio perform in 1984. They were a top-notch group essaying the heart of the piano trip repertory, but pianist David Golub died of lung cancer in 2000 at the age of 50. Violinist Mark Kaplan teaches at Indiana University’s Jacobs School of Music and performs as a soloist and inchamber ensembles; cellist Colin Carr is professor of cello at the Royal Academy of Music and continues pursuing a solo career. Here’s the brief, interview-free advance I wrote, followed by the review itself.

THREE YOUNG INSTRUMENTALISTS decided not long ago to interrupt their solo activities for a few weeks each year to combine their talents as the Golub-Kaplan-Carr Trio, presenting the best of the repertory for the ensemble piano, violin and cello. 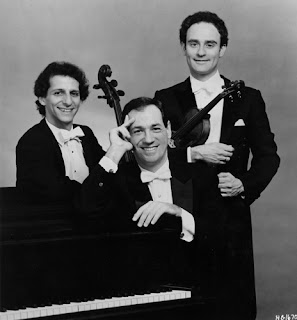 This trio will appear at Union College’s Memorial at 8 tonight in a program of trios by Mozart, Mendelssohn and Brahms.

Pianist David Golub has performed with the orchestras of Philadelphia, Cleveland, Pittsburgh and others here and abroad; he also has spent summers at Aspen, Marlboro and Ravinia. Violinist Isaac Stern called him one of the most gifted musicians I have met in many years of music making.”

Violinist Mark Kaplan’s list of appearances is similar to Golub’s. He also has performed with the Berlin Philharmonic, the Rotterdam Philharmonic, L'Orchestre de la Suisse Romande and others.

English cellist Cohn Carr came to the music scene in this country as a winner of the Young Concert Artists’ International Auditions. He was a first-prize winner of the Naumberg Cello Competition in 1981 and of the 1982 Piatigorsky Memorial Award. He is on the faculty of the New England Conservatory.

In May, the trio’s three performances at Alice Tully Hall in New York City resulted in full to overflowing houses and much critical acclaim. Tickets ($8 for the public, $4 for students) will be sold at the door. They also are available at the Schenectady Muse'um and Community Box Office outlets.

AN INSTRUMENTALIST CAN FIND A RICH PLEASURE in playing chamber music, and the Golub-Kaplan-Carr trio, which performed at Union College’s Memorial Chapel Wednesday night, made no attempt to hide, this.

The formidable program opened with Mozart’s Piano Trio in C, K. 548. This let us know rather quickly that the artists were each performers of high caliber. No technical problems were evident
here – or any place else during the concert – despite the brisk clip taken in the first movement.

Each performer was obviously aware of what the other two were doing and knew best how to comple ment the others. Pianist David Golub, playing the dominant instrument in the Mozart trio, knew when to hold back and when to let go, allowing for some dramatic piano playing.

Mendelssohn’s Trio No. 2 in C Minor, Op. 66 was the next piece, played as fast as I’ve ever heard it. Again, the players were equal to the difficulty of the piece. Violinist Mark Kaplan and cellist Cohn Carr ripped through some rough stuff like lightning without sacrificing the mysterious quality of the beginning of the piece.

The fast pace inhibited the performance in only one place: the scherzo. As with most of the music to “A Midsummer Night's Dream,” this part benefits from an ethereal feeling even while it hurries by.

The second half of the program consisted of Brahms’s Trio No. 1 in B, Op. 8. The group displayed a much different interpretive feeling with this work, taking the first three movements at a slower pace than it did the earlier pieces in the concert. This allowed the performers to fully explore the textures of this piece. The impassioned finale inspired an audience call for more,  which the group satisfied with a performance of the finale to Beethoven’s Trio No. 1.