From the Classical Vault Dept.: I tend to shy away from offering my less-than-enthusiastic reviews to the blog readers who stumble across this site. But this is what was published at the time, and it accurately reflects my impressions. Also, I’m in a cuss-ed mood right now, and it helps me to remember that things other than current events have driven me to my grumpy place.

FOUR MOZART STRING QUARTETS, performed by a foursome of excellent musicians with roots in the Marlboro festival: it’s a recipe for a sure-fire concert and an impressive season opener. It has the promise of a savory soufflé, airy and delicious. In this case, the confection fell a little flat. 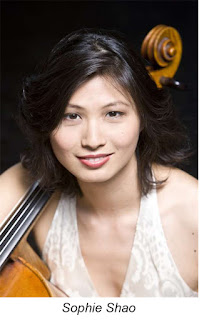 The 40th season of Union College chamber music concerts began last Thursday with a performance by Sophie Shao and Friends, those friends being violinists Lily Francis and Arnaud Sussmann and violist Paul Neubauer. Cellist Shao has shepherded other such ensembles to the Memorial Chapel stage in previous seasons, always to terrific acclaim, so this should have been no different.

Like the drummer in a rock band, the cellist in a string quartet is a vital unit of propulsion – especially when the quartets being played date from Mozart’s time, when the form was busily cutting loose from its forbears of keyboard-heavy continuo. The program opened with a jaunty, youthful work, the Quartet No. 7, K. 160, written in 1772 (the composer was 16), and, while the first violin gets most of the tunes, that being the style of the time, Shao worked the bass line with terrific verve.

Sussmann played first fiddle in this one, but the second movement’s sinuous melody often paired him with Francis in two-voiced song. The final movement’s martial character brought the piece to a quick, pleasing close.

The next two works, which straddled intermission, were this concert’s problem children. Drawn from the set of six known as the “Haydn Quartets” after their dedicatee, Nos. 18 (K. 464) and 15 (K. 421) are both in four movements, promising a variety of tempo and character. But they seemed, as the evening wore on, to blur into an unexpected sameness.

Francis and Sussmann switched off the first violin chair, thus providing a tonal contrast from piece to piece, but that wasn’t enough, and Sussmann’s ongoing problem with a slipping string seemed to add unneeded tension.

And they’re long works, each in the half-hour range. Even when they work well, it’s a big investment – and there was a piece yet to come, which pushed the concert well past two hours.

Eighteen years separate the final work, the Quartet No. 23 (K. 590) from the first, demonstrating how greatly the form evolved in Mozart’s hands. This is a quartet of equals, a small symphony, with a big melody for the cello to start things off. (The work was dedicated to a cellist, so Wolfgang was kissing up.)

Here the concert felt as if it were back on track, with a better sense of ensemble and momentum. Even some ragged playing in the third movement’s trio section only affirmed that the players were giving their best, and when we reached the big dynamic contrasts of the fast final movement, I wished that they’d jettisoned the previous work and gone straight to this one.

So many ineffable qualities go into making a concert a success that it’s easy to take them for granted and hard to point fingers when something goes wrong. This was high-caliber playing that seemed momentarily to lack something in the chemistry department. Had it been another night, I suspect everything would have clicked.