From the Classical Vault Dept.: When I visited Newell Jenkins at his Columbia County home in 1985 to learn about his upcoming concert series, I had no idea just how important and well-regarded he was as a musicologist and conductor. If I had, I would have made more of an effort to see the concerts he led over the next few years. But here’s an idea of what kind of music-making he was bringing to life back then.

FOR MANY YEARS, Columbia County has offered a retreat for New York City-based artists to quietly live among farms and fields; inevitably, the area has taken on a cultural identity of its own, with a very supportive concert audience being the result. 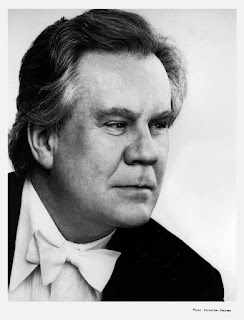 Two of the area’s favorite activities are combined in the “Leaf Peeper” concert series, which begins Saturday at the Catamount Ski Area in HilLsdale. The series was developed and is directed by musicologist Newell Jenkins, who makes his home in this little town.

The house, a contemporary design the color of which complements the fall foliage, sits atop a hill with a breathtaking view. Jenkins, whose sturdy stature and white mane suggest the classic picture of a musicologist, was anything but stuffy as he sat by his pool and described the coming four concerts.

“The first one, like most of them – like most of the concerts this year, it seems – celebrates the birthday composers. Members of the Clarion Chamber Ensemble will play music by Bach and Handel, the big piece being Bach’s Brandenburg Concerto No. 5. This will be performed at the Ski Area, which may seem an unlikely place for a concert, but acoustically it’s not bad at all. And it has ample space for an audience – it will hold up to 500.

“The next one will take place a week from Saturday, on the 28th, at the Dutch Reformed Church in CIaverack. That’s a lovely 1767 church with very nice acoustics in a very handsome building. We’re performing Alessandro Scarlatti’s dramatic oratorio “Santa Teodosia” with a score that I discovered and edited. We gave the work its 20th-century American premiere in New York last May and it’s been very well received.”

Jenkins has made a specialty of discovering and performing lost works of the 17th and 18th centuries, and he founded the Clarion Music Society in New York to promote that activity. Clarion Concerts has been responsible for an annual concert series in Manhattan since its founding in 1957; four years ago the group added the series in Columbia County.

“We were invited to perform a benefit concert at Camphill Village in Copake, under the auspices of COARC, the Columbia County Adult Rehabilitation Center. Camphill Village was built to house functionally disabled adults, and we’ve had one of our concerts there each successive year.

“Our third concert this season takes place there at Fountain Hall on Sunday, Oct. 6. It will be a sonata recital by violinist Linda Quan and harpsichordist Frederick Hammond, playing music by Handel, Bach, and Domenico Scarlatti.

“The final concert features a local group, the Hudson Valley Choral Society, in performance with the Clarion Concerts Orchestra. We celebrate yet another birthday, that of Heinrich Schuetz, who was born in 1585. Two of his motets will be sung along with two Chandos Anthems by Handel and Bach’s Cantata No. 95.”

That concert takes place at St. Mary’s Church on East Allen Street in Hudson on Saturday, Oct. 12. The three Saturday concerts begin at 7:30 p.m.; the Sunday performance at Camphill Village starts at 2:30 pm. Tickets cost $7.50 (senior citizens $5) and will be available at the door.

“You’ll be able to hear both sides of the ‘period instruments’ controversy,” says Jenkins, “The first concert will be performed on modern instruments and the last three on antiques. I’ve been getting more and more interested in period instruments because I find they give you a better balance between singers and ensemble. Also, since I realized that you don’t have to listen to the old musicologists who said we all had to go ‘wah-wah’ on them and play without vibrato, I’ve discovered that those instruments have a valuable identity of their own.”