Tavern in the Valley

From the Food Vault Dept.: The Tory Tavern, alas, is no more – Ralph and Irmgard Buess retired in 2013 and put the building up for sale. As I noted in the piece below, I saw the place in 1984 when he was restoring it because he and I worked together in the kitchen of Schenectady’s (also defunct) Mohawk Club, and he would dash home between lunch and dinner shifts to work on the place.

RALPH BUESS WASN’T CRAZY ABOUT the idea of this write-up. “I like things the way they are,” he told me. “Quiet. Peaceful.” He’s a modest person who gets a little embarrassed by the acclaim, but I believe he’s sincere in his wish to keep the business on its even keel. 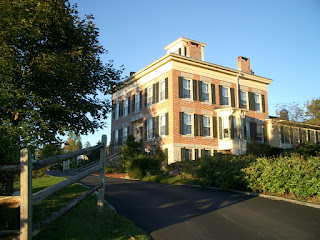 To say he’s a hands-on chef-owner is to put it mildly. Twenty years ago I visited the 18th-century building he was restoring and witnessed Buess at work on the building’s restoration, finishing room after room with a level of craftsmanship you’d be hard pressed to find in new construction. With walls and woodwork, furnishings and fixtures all hand-crafted, it’s no surprise to find food that gets similar attention.

George Mann lived there in the late 18th century, at a time when the Mohawk Valley became an important factor in the Revolutionary War. Initially sympathetic with the war, Mann switched sides and paid for his Tory sympathies with a jail term in Albany. Thus the restaurant’s name.

Its heritage is reflected both in the building, an imposing brick structure just north of Schoharie, and on the floor, where the servers sport Colonial garb and the menu re-thinks traditional American fare.

I dread to think what we’d be eating if the menu actually were based on 18th-century dining practices; even Colonial Williamstown cheats. Buess makes no apologies about his menu, which uses local foodstuffs where possible and takes a conservatively creative approach to how those ingredients are prepared.

Conservative also in the sense of avoiding waste. That’s why you’ll often find sausage listed on the menu. Bockwurst, for example, was offered as an appetizer during one of the visits I paid, a just-right portion of grilled sausage that didn’t even need the tomato relish served alongside. It was in the company of kielbasa and a smoky country sausage during another visit, this time served with a cream sauce spiced ever so slightly with mustard.

Four appetizers, two soups and eight entrées is a standard number of items, and there’s no pricing guesswork: they cost $4.50, $3.25 and $19.50 respectively. A complete dinner, which adds salad, coffee and dessert, is $35, which saves a couple of bucks.

It’s tempting to go the complete dinner route, but it’s a lot of food, and extends the amount of time you’ll sit in one of the lovely rooms ... so we got complete dinners. The emphasis is on domestic wines, which befits the heritage, and they’re well chosen whether you’re ordering by the glass or bottle.

The beer-drinking, poker-playing part of me digs the spinach-artichoke dip that shows up in a hollowed-out bread loaf; what’s served at the Tory Tavern is a richer brew with far more complex flavors, including the influence of chilies and parmesan cheese. Four buttery croutons aren’t enough, especially when your daughter surreptitiously swipes them, but the basket of warm rolls then comes in handy.

Buess does his own smoking as well as everything else, and the trout that is so prepared has the added hints of the blue cheese and pepper used in the curing. It’s still a fairly mild flavor, paired with a horseradish cream for added accent.

My wife was reluctant to share the compote of wild mushrooms, which I suspect was due to the presence of thyme, her favorite herb, adding its own personality to the vinegar-scented earthiness of the dish.

The four soups I’ve sampled were uniformly superior to what, as we say in our house, “comes off the truck.” It’s nice, for instance, to sample a cream of potato that rounds out the flavor without excesses of flour and salt. Especially nice was a smoked chicken and corn chowder, in which the smokiness blended seamlessly into the rest of the brew. 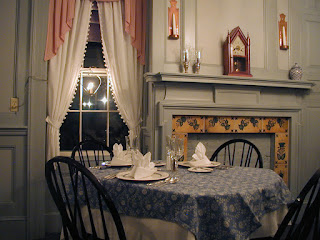 A dish like George Mann’s Tavern Chicken is a colossal no-no on any reasonable diet. The tarragon cream sauce hugs the chunks of grilled chicken, shrimp, artichoke hearts and mushrooms like an old friend, escorting them across the palate with a happy hello. Chicken also features in a saltimbocca preparation, this time as sautéed breast medallions topped with prosciutto and mozzarella in a splendid Marsala sauce.

Marsala also flavors the osso bucco sauce, accompanying a classic veal shanks recipe that slow-cooks the meat into tender submission, accompanied by a mirepoix to intensify the flavor.

Sauces show the measure of a chef, and the demi-glaze on which the grilled rack of lamb was served was another excellent example of Buess’s work. Ginger and peppercorns add sparkling hints of their own personalities, but it’s difficult to tell where one flavor ends and the next one begins. The lamb itself was presented just as we ordered, on the rare side of medium rare, holding its own against the sauce.

Of all the entrées we sampled the only disappointment was in the pork tenderloin diablo, where the sauce – a dijon- and horseradish-flavored cream – was delicious, but the meat itself proved a little too chewy.

Tossed salad and a sweet intermezzo are features of the table d’hôte dinner, which also requires you to order homemade desserts. How to choose among a triple-layer mousse cake, a tea-flavored flan, a hot fudge sundae or an ice cream-free sundae built of various types of chocolate mousse? Or the other items we didn’t order? It’s best simply to make sure you’re part of a large party so you can try them all.