From the Vault Dept.: Here’s a cookbook roundup I wrote for Albany’s Metroland Magazine seven years ago. I’m still consulting some of these book as I try to broaden my kitchen repertory.

YOU’LL EASILY FIND COOKBOOKS among this year’s crop that are exclusively vegetarian, but I’ve discovered some that have such good meatless offerings among the varied recipes that they’re worth considering for more than just recipes. They offer compelling insights into the whole world of the vegetarian meals you make. 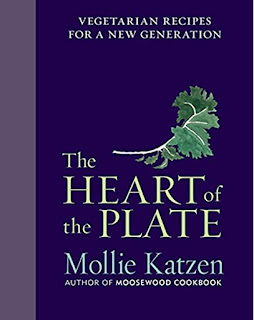 The garden gets more important every year. The biggest luxury of just-picked fruits and vegetables is a quality of flavor that typically doesn’t survive the trip to the supermarket, but there’s a comforting presence about backyard comestibles. This attitude has resonance in whatever the farm-to-table movement might be, but it has roots in an approach to food sparked in the 1970s by two pioneering cookbook-writing restaurateurs: Mollie Katzen and Alice Waters.

Katzen’s Moosewood Cookbook, published in 1977 and a steady seller since, showed us that vegetarian cooking could be tasty and rewarding, particularly if you added a lot of fat-rich extras.

Waters didn’t get around to writing a cookbook until 1984 (Chez Panisse Pasta, Pizza, Calzone), but her restaurant proved hugely influential. Any chef you’ve ever heard of who emphasizes fresh ingredients these days acknowledges one or both of them. And both have new books out this year, both offering a healthy, practical approach to working with what the garden offers.

“I grew up believing that vegetables were something that grew in my mother’s freezer,” Katzen has said, and her journey since then may have reached an apotheosis with The Heart of the Plate (Houghton Mifflin Harcourt). The theme is vegetarian, the emphasis healthy eating, so we’re looking at vinegar where once there was cream. But when, for example, she enthuses about “Slaws Beyond ‘Cole,’” there’s a solid case for enhancing any finely chopped, crunchy veg with lemon juice, agave nectar and maybe a little olive oil. It’s a recipe-intensive collection, but the chapters begin with helpful essays (the one on veggie burger variations solved my long-standing problems with the genre) and the recipes themselves are laced with options. And if you miss the hand-drawn, hand-lettered charm of Katzen’s Moosewood-era books, you’ll find it on the endpapers – but Katzen’s excellent photos are used throughout. 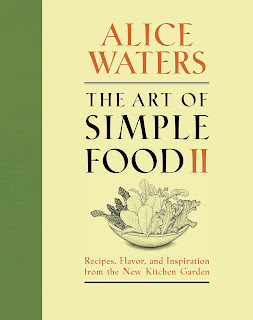 Waters follows up her popular 2007 book with The Art of Simple Food II (Clarkson Potter), a completely garden-centric enterprise. She begins with herbs, but that inspires recipes such as green rice pilaf with cilantro and onions, fried rosemary (it’s a great topping) and even a marjoram-intensive leg of lamb (lest you should fear this entirely veg-o-centric). Subsequent chapters (and recipes) follow over and under, featuring salad greens, garlic and onions, the various tubers and root vegetables and even stalky things like asparagus and fennel. Exotic greens like radicchio, essential greens like kale and collards and the cold-weather cabbages get their due, along with sections on fruits and berries. But there’s also a nice chunk of the text given over to managing your garden – and canning or otherwise putting up the result. Waters’s prose is as crisp and flavorful as her subject, making it a nice cold-weather companion as you plan what you’ll be planting.

I’m not sure how “extreme vegetable cooking” could be anything but marketing hype, and – sure enough! – that’s its function as the subtitle of Alexis Gauthier’s Vegetronic (Clarkson Potter). Gauthier was born and trained in France and works in London, and developed a vegetable obsession in rebellion against the meat-intensive Escoffier world. The brightly colored book – his first – features imaginative recipes set off by whimsical, not-always-attractive photos, but such is rebellion. It’s not completely meat-free – there’s pancetta and chicken stock, for example, in the “Umami Bomb,” a parmesan and wild mushroom custard – but such recipes as marinated figs in sangria and carrot and honey tart completely won me over.

Photos are the focus of Mary McCartney’s Food (Sterling Epicure), but it’s also a collection of recipes she grew up with and recipes she created. Her mother was a photographer, her dad is a well-known singer-songwriter and a nice sense of family comes through right from the start with breakfast items like banana muffins and real french toast – and soon after that comes the best-looking grilled cheese sandwich I’ve ever seen. Other stars of the page and plate include a terrine of roasted onions and veggie-burger ingredients, leek and pea risotto, savory corn fritters, a shepherd’s pie with carrots, green beans and mushrooms and a simple, rich casserole cauliflower and cheddar cheese. 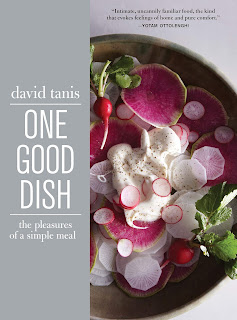 The secret of real garlic toast? “Nurse it along – it can’t be rushed over high heat or it will burn.” Plus the use of good bread, fresh garlic and good olive oil. Thus do we enter the world of One Good Dish, by David Tanis (Artisan), in which the acclaimed author of A Platter of Figs crafts a series of any-time-of-day dishes. Tuscan polenta, steamed new potatoes with garlic, rosemary and thyme and a sweet-and-salty nut brittle caught my eye, plus this: “Not to sound cranky,” he writes, “but to say that I am baffled by the current craze for eating kale raw is an understatement.” You’re going to cook it for a half-hour in his recipe, and if you add some chorizo, all the better. It’s not a strictly vegetarian book, but there’s enough good stuff with the grown stuff that you’ll find plenty here to work with.

Gnocchi is traditionally tomato-based – but how about making it with beets? That’s the kind of question Einat Admony asks in Balaboosta (Artisan), named for her Mulberry Street restaurant in Manhattan, and the name itself is a Yiddish term for the ideal wife. The emphasis is on Mediterranean flavors and techniques, but she slips in appealing recipes like one for a homemade Kit-Kat bar. Shakshuka is an Israeli breakfast dish with tomatoes, peppers (including jalapeños), Swiss chard and eggs served over challah; combinations like artichoke with lemon aïoli, fried olives with labne (yogurt and za’atar (roasted thyme)), parsley-intensive tabbouleh with cilantro and mint and a cardamom-scented baklava are some of the meatless highlights herein. Again, not strictly vegetarian, but we do need to learn to co-exist.