From the Food Vault Dept.: The Olde Bryan Inn in Saratoga Springs has a venerable history, which includes two review visits that I paid during the course of my Metroland tenure. Here they are, beginning with my first visit, early on in my restaurant-reviewing career, in 1986, and a follow-up eight years later.

LEGEND HAS IT THAT AMERICAN INDIANS, several centuries ago, discovered the healing properties of the strong waters at High Rock Spring, now the site of Saratoga’s Olde Bryan Inn. It was here that Sir William Johnson was carried in 1771 after being stricken, and his remarkable recovery brought notoriety to the place. 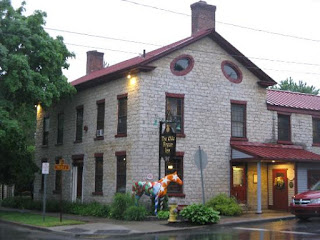 The strong waters are of a different variety today as the Olde Bryan continues to flourish as a tavern in a building more than 200 years old. You may, in fact, sample the strong waters inside or out: summertime finds a small outdoor bar area in full swing.

And the restaurant features a menu that should satisfy the gustatory needs of any situation, before or after concert or track.

Our party congregated at an outdoor table while waiting for a table within. The restaurant takes no reservations, so there may be a wait when it’s busy. But it is a large-capacity house, laid out and lighted for an atmosphere of intimacy.

The main dining room’s pre-revolutionary look is accented by stone walls, rough-hewn beams, and a shallow fireplace at one end. On the walls hang antique cookingware along with period paintings; red-globed fixtures shroud the lights.

On an early evening one recent Sunday, the Olde Bryan was filled with table after table of groups enjoying one or another of the menu’s varied offerings. The list of light fare starts with a selection of burgers, your choice of toppings. There are a dozen different popular sandwiches, including a reuben, French dip, baked Virginia ham, all for around $5.

You’ll also find soups and chili, seafood preparations, omelets and salads in the $3 to $7 range.

The Starters are the stuff I like to tuck into when working on  beer or two: this list includes chicken wings, potato skins, baby back ribs, nachos, and kebobs.

But it was the entrées we were interested in, a page of the menu augmented by a separate sheet of daily specials. Steaks come blackened, sliced with a topping of vegetables and cheese, grilled, served in chunks with shrimp; across the table, our carnivorous lensman went for the Prime Rib; his date opted for the New York Strip.

Seafood includes some pasta combos, and Susan went for the Fettuccini Gamberi, a shrimp feature (she does enjoy those spiny things that crawl on the ocean floor); I ordered the grilled salmon, passing up a very tempting blackened redfish.

And now about service, that most elusive restaurant feature. My own training for many years as a waiter came in a succession of snooty places where I learned the withering stare of superciliousness. It was the only defense against those who failed to understand the deliberate pacing of elegance.

But a guy in a tux has an easier time dealing with a crowd than a girl in a uniform; it’s a sad comment on the sexist nature of table service. What commends the Olde Bryan is that the waitresses are so efficient that they don’t allow the throng to get the better of them. I watched the tables around us get served quickly and the out-of-sequence requests (another fork, another beer) were never neglected. And the place was well-staffed, so you didn’t have the unpleasant spectacle of a harried server.

Our appetizers included French onion soups for Drew and René, a concoction topped with plenty of crispy, melted cheese that passed Drew’s “it’s not too salty” test. Susan’s shrimp bisque was much lighter than we’re used to seeing, almost a New England shrimp chowder, and, although the name mightn’t be appropriate, it’s a texture I like.

I tried an unusual combination of fried Brie (cooked until warm but not runny) and blueberry sauce, served with slices of garlic bread. I’m sure it’s nothing more than a nouvelle fad that won’t impact future menus (to use the literary buzz-phrase equivalent); it’s a novel way to sample fruit and cheese, though, tasty and filling.

A house salad is served with each entree, and the house dressing of creamy garlic is a fine complement (although the garlic-eschewers at the table opted instead for blue cheese or Italian).

An eye-catching appurtenance to the steaks was a pile of steak fries that looked like fat chips; the meat was done, I guess you would say most appropriately, to a turn.

Fettuccine Gamberi begins with a bed of pasta, yes, but goes on to a mound of jumbo shrimp, mushroom slices, broccoli florets, ham and cheese in a cream sauce. You take home half of a dish like this.

The salmon had the dark flavor of wood grilling, and supported its own cream sauce. At home I force myself to steam such a fishsteak, then serve it with a sprinkling of herbs. How nice, then, to let the diet go to hell and eat salmon as it should be sampled: with a buttery sauce.

So, since the diet was shot anyway, we desserted on some Olde Bryan favorites: René’s chocolate mousse was rich and moist, Susan’s chocolate-chip pie was served warm, like cookies right out of the oven. But Drew and I, Ben & Jerry’s fans both, each had the chocolate-chip cake (really a giant brownie) covered with B & J White Russian, hot fudge, and whipped cream.

REVIEWING “SARATOGA IN AUGUST” in August (in August) is a gutsy enterprise: you’re faced with a town at its best at its worst. The Olde Bryan Inn is housed in one of the city’s oldest buildings, at the far end of downtown (near the Sheraton), a relatively peaceful corner even in the midst of seasonal madness.

I paid a call the other night with my neighbor, Dick, who shares my cation about anything too touristy. And from the outside, the Olde Bryan has the threatening appearance of one of those Colonial Williamsburg joints where the servers are dressed in period costume and the menu features annoyingly antique recipes.

Because the restaurant takes no reservations, we parked ourselves on one of the outdoor benches and waited to be called to a table. It didn’t take very long, but gave me an opportunity to peruse a handbill about the place, from which I gleaned the following: The building itself dates from 1832, but the site teems with history. It overlooks what was once High Rock Spring, an Indian location known for its curative power and the place where Sir William Johnson recuperated from a battle wound in 1771.

Two years later a log cabin was built on the bluff (hence the Olde Bryan’s claim of “originally established 1773"), and a year later it was operated as an inn, which is how it functioned sporadically during the Revolutionary War. It picked up its name from war hero Alexander Bryan, who bought it in 1787; his son, John, built the stone house that we see today. It was used as a residence and even as a laundry until 1979, when Dave Powers bought it; he and partner Stephen Sullivan operate the restaurant that, happily, features an up-to-date menu and can seat up to 200 in the indoor and outdoor dining areas.

Dick and I got a small table in the middle of the main indoor dining room; the trade-off on agreeing to the first available table is that you’re liable to be seated near the kind of nitwits who ignite cigarettes after every course, and in our case there were ten of them surrounding us. (Many of them young enough to suggest that more intelligence should be at work, although the New Jersey accents are a giveaway.)

I didn’t learn the name of our server, and I’m sorry I didn’t: she did a terrific job with us and the adjacent tables. It’s a station-based service style, which can fall apart badly when things get busy, but we got what we needed in a timely way. Don’t look for a lot of elegance here: most of the plates are served and cleared off the arm and the servers move at a canter.

A good selection of American wines are accessibly priced and also sold by the glass, which is an important was to get the word out. So I started with the improbable combo of nachos grande (meaning there’s meat in the mix, along with olives and pepper slices and beans and so on) and a glass of Kendall Jackson Chardonnay. In fact, Dick and I split the nachos, then went on to the salads included with dinner, except that in my case I asked for a Caesar salad which was obligingly re-sized and re-priced. Not your classic Caesar – cooked eggs and tomato slices got in there somehow, and the dressing was something else entirely – but I wasn’t expecting anything else.

A basket of Olde Bryan biscuits is a nice accompaniment, although I was hard pressed to sample them owing to the slices of garlic bread that came with my salad and my entrée. The menu is cordoned into “light” and “hearty” sections; from the latter I ordered fettucini Ricardo, which features chicken chunks tossed with ham, mushrooms and broccoli in garlic butter, served over pasta and finished with parmesan cheese and cream. Nice, eh? And it was filling.

Lots of pasta dishes mingle with traditional chicken and steak preparations on the menu, and there’s even an “olde fashioned turkey dinner” (shades of Williamsburg!). Dick went for the Cajun surf & turf, which in this case presents shrimp along with a small slice of sirloin, all of it seasoned with a touch (but just a touch) of heat and served over rice.

We rolled out of there after a couple of portions of rich chocolate mousse and punished ourselves with a walk down Broadway and back. Thanks to the speed of the kitchen and the floor, we saw tables nearby turn over a couple of times while we dined, so if you get in early enough to get a table this would be a good pre-concert venue. And they serve a varied enough menu late enough to accommodate an after-concert visit. There’s no question that this restaurant will go out of its way to make your experience a pleasant one.

Dinner for two with tax and tip and a couple of glasses of wine was $66.