FRENCH COMPOSERS HAVE CELEBRATED the flute more vividly than any others. Berlioz was a flutist himself, and never spared the instrument in his monumental works; Debussy sounded a quiet clarion for 20th-century music with his “Prelude to the Afternoon of a Faun.” 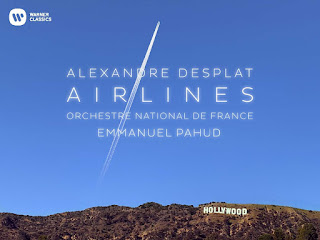 Alexander Desplat is a flutist-composer whose music is more often heard in the movie theater than the concert hall. He won Academy Awards for his scores for “The Shape of Water” and “The Grand Budapest Hotel,” and has racked up numerous other awards for his numerous other scores.

“Airlines” is an album of Desplat’s music for both genres, all with the flute (and flutist Emmanuel Pahud) front and center. The title track, written for flute alone, is a technical exploration of the instrument disguised as a pleasant rumination that Pahud performs with nonchalant ease.

The rest of the recording adds an orchestra to the mix – the Orchestre National de France, with the composer conducting – to present music from five of his motion-picture and a concert piece. “The Shape of Water” is the kick-off piece, a three-movement suite fashioned from Desplat’s score for Guillermo del Toro’s 2017 film. Nothing suggests undulation more persuasively than the time signature 6/8, and that’s the count for the haunting opening, with the combination of flute and accordion giving it an insistent yet friendly timbre. And the flute becomes the undulator itself in the second movement, “Watching Ruth.”

The music for “Lust, Caution” comes from Ang Lee’s 2007 spy picture, and it’s a two-and-a-half-minute ethereal setting for flute and strings that is not only reflectively beautiful on its own but also makes an excellent transition to the next number, the suite from “Girl with a Pearl Earring” (2003, dir. Peter Webber), with its lush, romantic brushstrokes.

The music for “Birth,” a 2004 thriller that starred Nicole Kidman, may not summon your recollection of the film itself because it manages to be simultaneously ominous and bouncy, lush and reserved, a Desplat specialty that also underpins his music for Wes Anderson’s 2014 epic “The Grand Budapest Hotel.” Despite the use of eastern European modalities, it’s a froth of light-hearted dance music.

The concert piece is a concerto that draws inspiration from “Pelléas et Mélisande,” a play by Maeterlinck that inspired a celebrated opera by Debussy. In Desplat’s work, there’s a broader dynamic range that gives room for a more jagged feeling at times, especially in the first of the three movements. There’s a sinister momentum to that movement’s opening that subsides to a chorale that brings it to a soft finish, a range that allows a thorough exploration of the possibilities of the sound of the solo flute – and Pahud is, as expected, masterful here.

A dreamlike opening to the second movement gives a false sense of hope – you know that this is a tragedy, and the “inexorable darkness” promised by the final movement’s titles evokes the dramatic death of Mélisande at the end of Debussy’s opera, until the final moments, when we ease into the mournful sound of the solo flute.

“Airlines” is a wonderful tribute to the many facets of Desplat’s career. The orchestra is first-rate and well served by the superior recorded sound. If you believe, as I do, that film music is the classical music of our era, then this is a worthy addition to you classical shelf. Actually, it’s a worthy addition wherever you plan to put it.
Posted by B. A. Nilsson at 11:09 PM