From the Theatrical Vault Dept.: I reproduced in these e-pages an opinion piece I wrote in 1984 after the premiere of a Raggedy-Ann musical inspired an Albany-area mom to get her panties in a bunch, as she complained that “there were portrayals of gruesome characters, a mother deserting her child, death and even suicide.” In popular entertainment? Can you imagine? Although I wasn’t won over by the musical itself, I saw nothing in it to warrant this woman’s whining. You can read my editorial here; below is my review; below that, a preview piece that ran the week before.

DERIVING A FULLY-STAGED musical fairy tale out of the classic stories of “Raggedy Ann” seemed like such a good idea that the Empire State Institute for the Performing Arts has done it twice, the most recent attempt a revamping of last year’s unsuccessful staging. 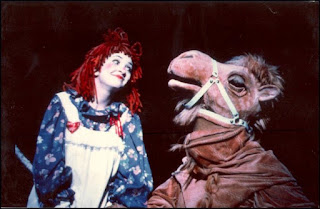 With a new book by a different playwright – in this case, the renowned William Gibson – and a revised score and lyrics by Joe Raposo, a wholly new show has emerged, with a completely different thrust: Gibson has wisely put the idea of making this a no-holds-barred fairy tale to the forefront, and the result is a vivid dream-cum-nightmare in which dolls come to life, a bed floats and flies and a young girl undergoes a series of confrontations with problems that are literally killing her during her waking hours.

As a starting point, Gibson borrowed the real-life fact that Raggedy Ann’s creator, Johnny Gruelle, invented the stories for his sickly daughter, Marcella. It is Marcella who becomes the focus of the show; a trio of doctors cannot diagnose her malaise, and her dipsomaniacal father tries to soothe her with a rag doll, to which he affixes a heart.

Nothing more is needed to bring that doll to life, and the dream begins. Marcella (Tricia Brooks) is escorted by Raggedy Ann (Ivy Austin) and friends into a world dominated by a closet, the door of which is flung open by the mischievous Raggedy Andy (Scott Schafer) to reveal the horrible forces of General D (Paul Haggard).

The General wants Marcella for his bride, and will claim her in a few hours; during that time, she and her friends devise various ways of getting to the doll doctor, who surely can do better for her than three quacks.

Gibson’s book makes no attempt to “play down” to the younger audience this show will attract, not should it: that’s a terrible insult to deal a child. Symbolism abounds, not the least of which is the figure of the evil General D himself. The quickest interpretation of him, of course, is Death, which is supposed to claim poor Marcella at any moment; the image of marriage adds the loss of another kind of innocence to the horror. But the D can stand for Dad, too, who’s made himself inaccessible to the girl; and he also could he taken for Dullness: “You have to outwit the ordinary,” Raggedy Ann declares. “You need .a talent to live!”

What’s missing is stronger characterization of the good guys. Marcella and Raggedy Ann, really two sides of the same soul, don’t seem to operate from the kind of self-determination that makes fairy-tale heroes so attractive. The quest for the doll doctor is hardly different from Dorothy’s search in “The Wizard of Oz,” yet the latter emerges as a distinct personality.

Much of the blame for this should lie with the music and lyrics. Gibson and Raposo could have been writing two different shows: all energy seems to come to a stop when each song starts up, and the flavor of the songs is all sugar-coated catch-phrase. A song allows the author to present a quick, deft character study – as did Arlen and Harburg in “Oz” when presenting each of Dorothy’s companions. Raposo seems to be underestimating his audience, agressively tailoring his material for youngsters: the lyrics lack power words in favor of plugged-in rhymes, and the music rarely supports either lyric or mood.

Even a youngster deserves better, and got it from the likes of Arlen and Harhurg and the Sherman brothers (“Mary Poppins,” “Bedknobs and Broomsticks”).

The production bursts with fantastic special effects, none of which is necessary on the stage. Leave it to the movies, an industry obsessed with such things, and concentrate on the immediacy of characters. Think of Laurel and Hardy’s wonderful “Babes in Toyland,” which has the lousiest possible costumes and effects, but where your imagination fills in what’s missing.

“Raggedy Ann” is well acted, especially by Ivy Austin and Tricia Brooks; the direction and choreography, by Patricia Birch, is terrific, even when she’s working with a gratuitous chorus, which seems to serve the function of giving available talent something to do. As it stands, this musical offers a fun time at the theater, but it could do so much more if such a grand spectacle weren’t made of it. Perhaps there will be an even better third time around.

ONE OF THE PROBLEMS THAT BEFALLS writers of material for children is the tone of voice. As a youngster, I was convinced that my parents were forced to undergo a weird transformation that wiped their brains clean of any recollection of childhood’s actuality: Dad’s “When I was a boy ...” tales always had as protagonist a precocious adult. 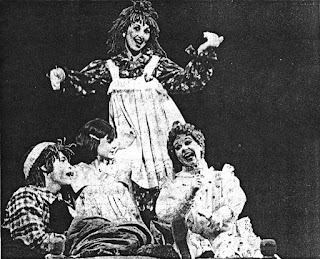 What are the most enduring of children’s tales? It seems that stories written with adult readers in mind will best hold a child’s fancy. Robert Louis Stevenson’s books still work their magic; Penrod is a more believeable fellow than the Hardy Boys.

When ESIPA was looking at the possibility of getting its ambitious musical “Raggedy Ann” rewritten, playwright William Gibson was approached. He turned it down at first; upon learning of the background of the original stories by Johnny Gruelle, Gibson found a focus.

Gruelle invented the Raggedy Ann stories to tell his daughter, Marcella, during a time when Marcellas’s health had declined (leading to her death at age 14). Gibson “imagined the dolls coming to life to make an alliance with Marcella against death.” And so a very adult concern came to be at the center of this musical fantasy.

“It sneaks up on you,” says Ivy Austin, who is playing the title character. “The story starts by appealing to the adult in you, but before you know it, it catches the child in you, too.

“There’s a lump-in-the-throat feeling to it, as well,” says Austin, putting on a distressed face and drawing her fingers down her cheeks to mime the flow of tears.

In a world where incredible hype is shoveled at audiences in order to build the career of each talentless nine days’ wonder, Austin is a startling contrast. She is an actress who has achieved success through talent and hard work; it’s the talent that makes her success seem easily achieved.
“It wasn’t easy,” she insists. “I’ve been to the auditions – worn out shoes doing so. It’s taken me a while to get where I am.” She attended the famed High School for the Performing Arts, then “you’d think I’d go on to a college for theater, right? That’s not what happened. I went to Colgate and graduated with a biology major. It satisfied a particular need at that time. But then I came right back to New York and started in with the auditions again.”

Her face is familiar to TV viewers as the fast-talking pitchwoman for Airborne Express. “Everyone got interested in how I could talk so fast. I wound up on the Today Show to explain it. The exposure is great for my career, but it’s amazing what people are interested in. And they remember you too. Not long ago, I was in a department store eyeing a present for my mother. Too expensive to buy: I decided. The saleslady said to me, ‘Don’t worry, just do another commercial and you can afford it.”

Besides commercials, Austin’s background includes a part in the movie Grease II, working with choreographer Patricia Birch, who also is responsible for the dance in “Raggedy Ann” (marking the sixth collaboration for the two). She is a soprano with the New York City Opera and toured in “They’re Playing Our Song.” Other work in TV, theater and movies completes her resume; another recent collaboration with Birch was a rock video.

“There’s nothing terribly glamorous about the life of an actress,” she insists. “It’s the work you do that deserves the recognition. You eat, sleep, go shopping the same as anyone else; but when I’m onstage, I’m giving you a chance to live out your fantasies through me. I guess that’s why it’s important to think that everything I do is special.

“The reason a show like ‘Raggedy Ann’ is so wonderful is because of the fantasy aspect. It’s right out there in front, inviting you in for something magical and even a little sentimental. So you see, this offers me a chance to do my best work.”

Of course, what she’s doing is acting the most devious role in an actress’s repertory: that of an everyday person, trying to distract you into thinking she’s not so special. It’s a compelling performance, but she leaves you with the feeling: that something wonderful just happened, like a balmy summer day creeping into the middle of winter.

ESIPA’s production of “Raggedy Ann” also features the songs of Joe Raposo, set design by Gerry Heriton and Vicki Baral, lighting by Richard Nelson (who won a Tony award for his work on “Sunday in the Park with George”) and costumes by Carrie Robbins.

The show opens Friday evening at 8, with additional performances at 8 PM Saturday, a Sunday matinee at 2 and at 10 AM Monday through Wednesday. Tickets, priced from $4 to $9, are available at CBO outlets and at the ESIPA box office at the Egg.