From the Food Vault Dept.: We’re still in early March, so don’t be fooled by the melting snow. It’s only clearing a space for what’s bound to surprise us before the month is out. Here’s a piece I wrote during the waning months of Metroland to discuss the business of stocking up for a snowstorm – or even, if you want to fresh reason to panic – a pandemic.

I HIT THE SUPERMARKET ON MONDAY. I wasn’t sure that I needed anything more to get me through the predicted apocalypse, but I felt reluctant to miss a chance to surge through the crowded aisles among my panicky neighbors. 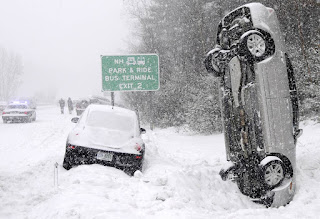 Grim were their miens as they whipped their heads from side to side, studying the cheerful abundance as if they’d never seen such foodstocks before. And then a tremble, and then a pounce! – and a canister of raisins gets snagged as surely as a cat grabs hold of a vole.

Soon enough I took my place at the end of a long, winding line to the checkout register, my view so obscured by these towers of comestibles before me that I was unable to mark my progress. No sense of we’re-in-this-together lifted our spirits, and, as we now know, no actual disaster arrived to maroon us.

I didn’t even need to go to the store because we tend to keep plenty of stuff on hand and try to remember that getting snowed in should be celebrated. It’s a break from routine. Unless you’re in some kind of peril, in which case you’re probably not reading this, it’s a time for celebration.

Food is part of that party. You can prepare; you can wing it. I like to challenge myself to come up with novel ways to empty the pantry. Maybe my chickpeas with pasta and barbecue sauce wasn’t such a wonderful combo, but the truant aspect of being home during a blizzard made it okay to try it. Nobody else ever needed to know, unless your family blabs it around.

You know about stocking up on flashlights and water, and we all take the occasion to bring home more milk than we know what to do with, but is maple syrup on your list? Get rid of that excess milk by making pancakes. It’s the perfect snowstorm food, giving you a carbohydrate-intense start to a day that inevitably will end with pizza or pasta. Flour and baking powder should be on your survival list, and you’ll need an egg and a couple of teaspoons of sugar for the recipe. And anything can be wrapped in pancake, which saves you from doing dishes.

There only are a couple of likely snowstorm scenarios to prepare for. Most common is the couple-of-days housebound as plows do their magic, after which it’s back to market. More brutal is the storm that knocks the power out for a few days, when the neighborhood throbs to the sound of generators juicing every house but yours.

Which may not affect your freezer, but could play havoc with the refrigerator temperature. This may be the time to use that extra turkey you got on sale at Thanksgiving. Transfer it from freezer to fridge. It’ll function as an ice block. By the time it thaws, the power probably will be back on, and you can celebrate.

Cooking when you’re powerless is simple with a gas stove and oven. Should you be saddled with electric, you can brush the snow off your outdoor barbecue, which is why a year-round supply of charcoal and/or propane is good to have. But I would (and did) drop the 25-or-so bucks on a portable butane burner, typically advertised as a camping stove. You can get several one-burner meals out of a can of butane, but keep extras, especially as they’re cheaper by the case. It doesn’t require fancy venting. And it puts out about 11,000 BTU, which will get your water boiling in a hurry.

You never have to panic-shop if you keep certain essentials on hand. Onions and garlic, potatoes, rice. Apples and oranges. Flour, sugar (for pancakes, so make sure you have baking soda and an egg). Dried pasta. Bottled water. Bread.

Alongside cans of whole peeled tomatoes I keep some ready-made sauce. If it resists being wrapped in a pancake, it’s probably a candidate for tomato sauce.

Cans of tuna. Cans of beans – enough of a variety that you can throw in some onions and make a three-bean (or however many) salad, seasoned with oil and vinegar, which of course you also have on hand. And there’s no shame and a lot of deliciousness in eating chickpeas right out of the can. It’ll keep you from misguided experiments with barbecue sauce.

Dried soup is handy, but I also keep dried chicken stock base, allowing me to concoct my own soup out of what’s at hand. Oatmeal is good should the pancakes pall. And popcorn can be made over your butane stove.

In the fridge are the usual suspects: milk and eggs and butter, and allow yourself the luxury of cheese, especially some parmesan to grate for that inevitable pasta dish.

If, like me, you grind your coffee beans each morning for the wake-up cup, remember to pre-grind some, or keep a hand-crank mill on hand. Or stash a can of ground coffee in the cupboard, rationalizing that it’s better than nothing.

One winter when I was very small and living in the wilds of Cincinnati, my mother stuffed some piles of the new-fallen snow into a small barrel I’d never seen before and invited me to help her twirl the crank that sat on top. To my astonishment and delight, this turned the snow into delicious ice cream. Some years I realized that the snow served merely as the cooling agent surrounding a canister of sweetened, scalded cream that was dasher-churned into the tasty result. Ice cream in a snowstorm? I – and your children – highly recommend it.