From the Food Vault Dept.: What, I occasionally ask myself, did I have for dinner thirty years ago? In many cases, it’s on record, and in this case, it was a lavish meal at the (then) Albany Desmond Americana’s (now-defunct) annual wine festival, as described below. I also wrote a piece for the occasion profiling Joshua Wesson for the Schenectady Gazette; that you can read here.

THE ALBANY AREA is the second-largest market for wine in the state, having edged out Buffalo and Rochester to stand just behind New York. Attendance at the Desmond Americana’s annual Albany American Wine Festival also grows, with this year (the fourth) bringing close to 2,000 people through the hotel for the weekend’s events. Which include an auction, many seminars, lavish buffets for Friday dinner and Sunday Brunch, lots and lots of wine waiting to be tasted – and a special dinner Saturday night. 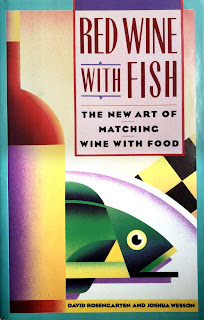 This year’s dinner improved on the previous three by adding a special twist to the theme of wine and food matching. Joshua Wesson, co-author of the book Red Wine with Fish and co-publisher of the magazine Wine and Food Companion coordinated the matches with menu selections from his book.

Craig Goldwyn, publisher of the International Wine Review, selected the wines from among those awarded top scores by his magazine. Then he and Wesson filled in the foods.

Yes, of course there was red wine with fish. There had to be. But such a meal begins with a sparkling wine, and hors d’oeuvres were passed to the pouring of champagnes from Domaine Chandon, Chateau St. Jean and Iron Horse. Anyone arriving with a notion of American champagne-producing inferiority got that attitude washed away.

About 350 people were seated in the hotel’s grand ballroom for the dinner itself, and they were fairly comfortably accommodated. It was for sheer number alone that I shaved half a point from the ambience: my preferred head count is two.

A “beggar’s purse” started the formal dinner: a crepe filled with creme fraiche and a sprinkle of caviar, tied with a chive. Textures in the course were wonderfully complicated: chewy crepe, smooth filling and the little sour pops of the caviar. A 1986 LaReve Sauvignon Blanc provided the sturdy wine match, from an underrated winemaker on Long Island.

Ahi-Ahi was next, and don’t go saying “gesundheit.” This is a chunk of grilled tuna which, as Wesson observes, could easily be taken for beefsteak. Lime tequila butter was drizzled over the meat, and two wines were poured in our glasses: a 1987 Fetzer Chardonnay for the white fans, and Vichon’s 1986 Merlot the dangerous red. Did one work better than the other as a match? I drank all of both and would be hard pressed to pick a favorite. Like dating twins.

Wine was the next course, in a way: the sherbet served as intermezzo was made from a Johannisberg Riesling, with a little zest of lemon ground in, too.

Dispelling the mistaken notion that wine can’t go with a vinaigrette, we were served a 1987 Glen Ellen Chardonnay to complement the dish of field greens and raspberry dressing. In a proper match, like this one, the wine pushes the sharpness of the vinegar back into an easygoing, laid back state.

With so many to serve and so much coordination required, dinner lasted longer than was hoped or planned. We were a good couple of hours into it by the time the noisettes of venison were served. They seemed to have been held a bit too long and were drier than expected – that’s where the half star from the “food” category went.

The three reds paired with the meat were distinct yet able matches, a marriage of trigamy, I guess. A Pinot Noir from Arterberry, Beringer’s 1985 Cabernet Sauvignon and a Zinfandel from the Napa Valley’s Storybook Mountain were the competitive spouses.

You can’t be faint of palate or constitution to bitter-end your way through a meal like this. Fortunately, the end is never bitter, always sweet. A full-bodied, honeylike Late Harvest Johannisberg Riesling from Rodney Strong in California’s Russian River Valley was matched with a Buttery Apple Tart with Rum and Cinnamon for a triumphant finish.

Try the dinner yourself next year if you want to die and go to culinary heaven. Or try it right away: get Wesson’s book and try some of the recipes. And invite me over.