From the Food Vault Dept.: Last New Year’s Eve, I sought a restaurant to which to retreat after a performance I give in Albany. The place has to stay open late and offer no price-jacked holiday specials. The only place I’ve been able to find is Smokey Bones, which has done a good job of satisfying those needs, although the service, unlike what’s reported below, can be glacial. I'm sure I'll be visiting again late Tuesday night. Here’s a review I wrote of the place when it opened in Albany in 2000, before Metroland established a policy of avoiding chain restaurants. Don’t expect the menu and pricing to be like this should you visit.

THIS IS A KILLER IDEA: chain-restaurant barbecue. The fact that it originates with the same company that gave us the Olive Garden gave me pause – after all, that emporium of pre-fab Italianesque food rises to the barely mediocre at best. And the fact that it’s combined with a sports bar theme made me even more nervous: there’s no greater torture for an uncoordinated endomorph like myself than to be remind of the humiliation of high school gym class.

Yes, it turns out that you’re surrounded by TV sets, but at least you don’t hear them unless you specifically tune your table speaker to one of the channels. And it amused me, earlier this week, to see the Bush-Gore Supreme Court fight broadcast side-by-side with wrestling and ball games.

This place has two killer characteristics going for it: service is first-rate and the ribs aren’t far behind.

I visited twice to make sure this was true. The first time, a couple of weeks ago, my family and I showed up on a Saturday evening not long after the grand opening and joined a throng that had dug in for a 30- to 45-minute wait. I’m not a patient fellow, but my wife persuaded me to cool my heels, which wasn’t so bad when I found a space on the couch. We were assigned a large paging device that flashed in red when we were summoned, and that summons arrived within 20 minutes.

The place sure was busy. Central Avenue’s former Red Lobster (also owned by the same parent company) was thoroughly transmogrified into what looks on the outside like a fort and inside like a hunting lodge (albeit a lodge with lots of TV sets and a big bar in the middle). Most of the seating is at booths, and they’re fairly roomy but not designed for the truly fat.

You get a tour of the table – meet the hot sauce, the barbecue sauce, the TV sound control. The menu is your placemat. And then a pitch for their frozen margarita to which, remarkably, my wife succumbed.

Among the dozen appetizers are the expected – wings, poppers, nachos, skins, all in the $5 range – with some less usual fare like grilled barbecued drumsticks and a plate of spinach-artichoke dip. We got a plate of the last-named to start with, although food emerges so speedily that you can easily start with the main stuff.

But it was nice to have the tortilla chips and dip to go with my pint of Newcastle Brown. Nothing remarkable about the flavors here; it’s filling. Susan sipped her frozen margarita and our daughter soberly knocked back an IBC cream soda.

Despite the fact that the tables were packed and the servers were scurrying like mad, we got no end of attention, and not just from our main server. And not obtrusive attention, either; there seemed to be a sincere desire to make sure we were happy. (I later learned that there’s a two-week training program during which this is emphasized. They should rent out this program to some local, service-challenged restaurants.) 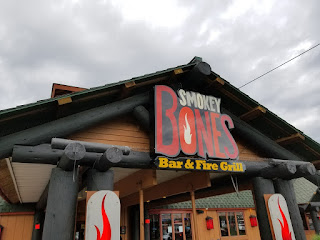 During my second visit, earlier this week, the tempo was much slower but the attention was just the same – each time my iced tea level fell to within an inch of the bottom, a passing server would quietly ask if I wanted another.

The several barbecue platters include pulled pork for $8 and smoked beef brisket for $9, and that includes fries and a side of cole slaw or baked beans. We chose from the combo platters, however: No. 3 puts together a half-rack of baby back ribs and a half rack of not-so-baby spare ribs ($15), and no. 2 is a mix of sliced pork, smoked beef brisket and grilled smoked sausage ($11).

The meat gets significant attention from the smokers in the back of the house, with the pulled pork pulling 12 hours, the beef brisket getting ten. “We call it the Zen of barbecue,” says operations director Edgar Guevara.

The other secret here is sugar. The meat on the ribs – bright red pork – practically leaps from the bone, and the all-permeating sauce enhances the smokiness. But it’s a sweet sauce, at least sweeter than what’s most popular in my kitchen. And the sweetness is pervasive: order the cole slaw and you’ll taste it, while the side of BBQ baked beans boasts a strong flavor of molasses enhanced with extra sugar. That’s my only complaint, and it’s not a big one.

(I later tried a burger – half a pound of meat, topped, in this case, with bacon and cheddar, for $6.50 with fries. It was terrific.)

We finished with a run-of-the-mill piece of pecan pie and some ice cream for my daughter. And keep this place in mind for your kids – there’s a special menu and the whole place is very child friendly.

Dinner for three, with tax and tip, drinks and dessert, was $60.

Metroland restaurant reviews are based on one unannounced visit; your experience may differ.