From the Food Vault Dept.: And where did I dine back I went to that Penn & Teller show I wrote about earlier? The same issue of Metroland that ran my advance had this overview of an Albany-based pizza and casual dining restaurant called Mangia, which had three units in the area at its height. The place closed in 2008 and was demolished to make way for a more upscale place called Créo, which suffered a series of management vicissitudes that brought down the place after seven years. It’s now home to Jacob & Anthony’s, a casual-Italian restaurant with a sibling in Saratoga Springs.

MY FIRST RESTAURANT-BUSINESS FRIEND was a chef named Angelo who proudly ran his own eponymous place near the town’s post office and Grand Union. As a teen, I’d stop in for a lunchtime bowl of soup on the many days I skipped school, and Angelo would sit with me in the nearly-empty place and shake his head and complain, “People don’t want to go out to eat in a shopping plaza.” 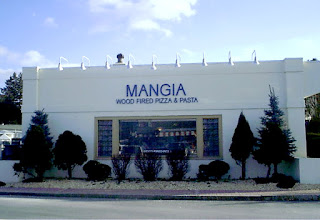 Sound wisdom, I’m sure, but the Capital District’s exurbia is a far cry from small-town New England and a shopping-plaza restaurant has a better chance in an easily-accessed place like Stuyvesant Plaza. Besides, Angelo was offering fine dining. Mangia, the latest occupant of the plaza’s southeast corner, is a much more casual place.

What killed the Howard Johnson’s that was there I don’t know – people seemed to have grown used to the mediocre food. The sports bar that followed was phenomenally silly, so Mangia is a relief. The food is good, on the order of the nearby Coco’s, and the place has a gimmick: wood-fired pizza.

It’s a good gimmick and a handy selling point. And, thanks to the flavor imparted by the wood itself and the hot temperature such ovens achieve, breads and food are cooked quickly and taste good. And your meal emerges in no time at all.

Mangia has been open for not quite two weeks at this location, and they’ve done no advertising that I’ve seen, but the place was packed at lunchtime last week when I slipped in with a party of four.

We waited at the bar for a table, although we could have opted to eat there. The counter is roomy enough and the staff is happy to convey the food. But we just ordered drinks, which meant dealing with a dopey policy that doesn’t allow you to carry a drinks tab onto your food bill. Dining is intended to be pleasurable for customers, not accountants.

Although there may well have been a quorum of accountants there. Definitely a business crowd thronging the place, with many dressed-for-success under-30s among them.

We were taken to a table in fairly short order, certainly no problem even if we were in a hurry, and presented with the glossy menu that also serves the Mangia affiliates in Slingerlands and Plattsburgh. It’s a streamlined bill of fare that serves both lunch and dinner. Pizzas range from $5.95 to $8.50 and would certainly serve two if appetizers are also ordered. You can build your own by choosing from a varied selection of traditional and trendy add-ons, or try one of the specials.

Nobody at the table had the fortitude to try the “Mangia Maui,” which puts ham and pineapple chunks on top, but fellow-columnist Al went for the “Pizza Pasta Pie,” which sports cheese tortellini and smoked mozzarella.

The wood-fired flavor does permeate the crust, and I suspect it enhances many of the other toppings much more than it affects tortellini. Still, the combo wasn’t bad at all, and the crust has a good, crispy texture.

For starters, Mike had the pasta fagioli, which is cooked in a vegetarian stock and comes out very thick, the pasta and cannellini serving almost as spaghetti in this creamy, meatless sauce. You can make a meal of it, but Mike went on to try the grilled chicken pesto, a pita-pocketed sandwich that’s also topped with tomato and basil-seasoned mayonnaise and presented with a nice array of greens.

Almost indistinguishable from chicken Caesar pita, which uses Caesar Salad dressing and feta but is otherwise a chicken sandwich in pita bread. This was Sharon’s entree, which, combined with the minestrone with which she started, made for a filling meal. The minestrone is the soup of tradition, thick with pasta and vegetables.

I started with a simple salad, which is nicely presented but a pricey $2.50. The annoyingly-named “calorie conscious calzone” that I followed with turns out to be a great meal – I could only eat half – of ricotta and mozzarella and cottage cheese combined with tomato, spinach and broccoli in a whole-wheat crust. It’s fast-baked in the wood oven and served with a side of tomato sauce.

Although the management is young and harried, the staff plies the floor well and gracefully. I spoke with a waiter named Henry who should be awarded for his calm under fire and took the time to explain that the wood-fired ovens were built right into the restaurant when the place was refurbished. “They burn at about 700 degrees Fahrenheit,” he explained, “and that’s the secret. The flavors don’t get a chance to seep out. We use maple and oak for a hot, consistent fire, and we roll the breads and dough in and out of the oven on cornmeal.”

Cornmeal only cooks when it’s liquefied, so it’s an ideal vehicle to keep the breads from scorching or sticking to the ovens. “Because we can get a pizza out of the oven in three to five minutes,” he went on, “we can get you in and out for lunch in under 20 minutes.”

The other secret of Mangia? It’s prole food dressed as something trendy. There’s nothing experimental on the menu, but there’s also nothing threatening. A new face is put on old favorites. Culinary history will never be made here, but – as Henry promised – you will get your lunch on time.