WHAT’S MOST IRONIC about Gary Kleppel’s plea for sustainable agriculture is that he’s merely asking us to do what was done for thousands of years in the years before chemicals and industrialization dominated the fields: keep it natural, diverse, and local. 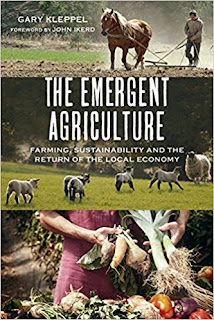 Kleppel sees his essay collection The Emergent Agriculture: Farming, Sustainability and the Return of the Local Economy as a conversation with the reader, a conversation developed over the course of his thirty years as a university professor. But it’s an academic text only insofar as his arguments are well-reasoned and backed with proof; otherwise, it’s a pleasant and inspiring manifesto.

His suggestions seem radical, but so do the threats of disease from unsafe farming and the loss of farming itself due to climate change. “If you attended an agricultural college in the past 60 years, this is how you were taught to farm,” he explains, describing the industrial model he’d like us to get away from, and he also castigates “privatizing elements of the food system (such as plant genomes) that have always been in the public domain and belong there.” So it’s not a book to make Big Agriculture very happy – but Big Ag doesn’t seem to care.

The iconic image of the American farm is very much at odds with its reality, where pollution and unsafe practices result in huge swaths of unusable farmland and ever-growing instances of food recalls. But the agri-business model persists, on the one hand strangling farmers with the costs of seed and equipment, on the other bottlenecking the farmers’ sales channels by owning the distribution system.

“For instance, an Iowa farmer who grows corn for the industrial system produces an average of 187 bushels of corn per acre. If this farmer is working 10,000 acres, he needs to dispose of nearly 200,000 bushels of corn once it is harvested. The farmer can’t bag that corn. He can’t sell it and ship it throughout the country. He is the grower. The job of distribution rests with the company that buys his corn. This is accomplished at enormous storage tanks called grain elevators, which are usually owned by large corporations.” And, of course, that’s where the price is set. An inflexible price, often set artificially low in order to increase sales – even as companies jack the price of genetically modified corn seed, as Monsanto did in 2009, raising that price by 42 percent.

Sustainability implies behavior, notes Kleppel, pointing to the 1987 Brundtland Commission Report on Sustainable Development to the UN. The report cited three key elements: environmental stewardship, economic viability, and ethical behavior. An oft-quoted definition of sustainable development is defined in the report as: “Development that meets the needs of the present without compromising the ability of future generations to meet their own needs.”

Applying these elements to meat production is Kleppel’s first challenge. Not surprisingly, he seeks a more intimate model, through which the customers can be assured that the process is clean, safe, and humane. And, of course, free of the contamination that current industry practices impose. But he acknowledges that “only when the public demands it will the industry clean up its act.”

It’s the super-farm dedicated to a single product that not only bankrupts farmers but also falls victim to predators and disease, all the more reason, Kleppel argues, for bio-diversity. Technology is pushing us in the opposite direction, however, as genetically modified vegetation invites monoculture farming. But Kleppel doesn’t come down squarely against GMO products; rather, he writes, “If a technology enhances species or genetic diversity, it will increase the stability of both agricultural and wild ecosystems. If the technology reduces diversity, it will destabilize these systems.”

Every plant is a solar collector, so the use of sunlight has been well-proven. Kleppel argues that this should be an inspiration to energize current food production with renewable sources. And the switch to solar power in the U.S. “could be accomplished in just a few years by simply transferring the hundreds of billions of dollars spent on oil-industry subsidies to the federal and state agencies that already dole out funds to home owners and businesses interested in alternative energy.”

With a chapter titled “The New Normal,” Kleppel turns the inevitable corner, addressing the changes a changing climate will impose. “Farmers have played roulette with the weather for 10,000 years,” he writes, but he notes that there was always a measure of predictability that now has gone away. Gone awry, actually, as we battle as much with politics as with the weather. He notes that he has been a researcher for more than 30 years, and that “in all this time, I have never encountered a professional consensus on a major scientific issue to the extent that I have with climate change.” Yet it remains a point of denial among those who profit most upon retaining the energy-policy status quo, and those include lobbyists with deep pockets. But Kleppel’s new normal can side-step that barrier through personal initiative, an initiative that spurns monoculture farming and embraces new approaches to distribution, such as the CSA (Community Supported Agriculture farm shares). And the agriculture community itself can profit from redefining the ties among local farmers.

This becomes the nucleus of the book’s third part, featuring examples of a local economy at work, an economy in which CSA farm shares replace bank loans to finance a farm’s growing season. He takes a realistic view of the farmers’ market (where he sells his excellent sourdough bread every week), observing that those who shop there “are the choir. We are singing from the same hymnal.” But, he adds, “From where I stand interest in small-scale, local food production is not limited to particular social classes. The only thing that’s limiting is the amount of bread I can bake.”

It’s an issue of health, too, of course. He recounts a Mother Jones investigation in which eggs from fourteen truly free-range farms were tested and compared to the USDA egg standards, discovering that the free-range eggs had a third of the cholesterol and a quarter of the saturated fat reflected in the USDA norm, not to mention significantly higher amounts of vitamins, omega-3 fatty acids (the one type of fat you don’t want to cut back on), and beta-carotene. But a supermarket’s egg department tries to gull you with carton claims that reflect a disingenuous reality – and sells eggs, as they do milk, that has only a fanciful geographical origin.

This, says Kleppel, is what has turned our food into commodity items, wreaking havoc both with its value and production. Just as the Slow Food movement seeks to celebrate that which is local, so too does a Slow Money approach resist such commoditization.

How can local farms feed the country? There’s a chapter devoted to that topic. Not surprisingly, it celebrates local-ness, and the benefits of interacting with the farmers who cultivate the food you buy. And it moves into larger-scale possibilities, exemplified by Kleppel’s successful effort to get his own university’s food-service company to purchase local grass-fed beef – an accomplishment helped by efforts of students and faculty.

Perhaps the most admirable aspect of this well-written book is its hopefulness in the face of the challenge of changing the behavior both of consumers and corporate behemoths. Every proposal is well-reasoned, and, as he writes, “In the end, I believe you will agree that the current, dangerous, inhumane, and dehumanizing American industrial food production system is being replaced by something much better.”

The Emergent Agriculture: Farming, Sustainability and the Return of the Local Economy
by Gary Kleppel
New Society Publishers, 2014