From the Classical Vault Dept.: Pianist Alicia de Larrocha switched record labels in the late 1980s, and embarked on a project with her new label, RCA, to record all of Mozart’s sonatas and concertos. The review below looks at (or listens to) the debut recording in that series. She did, in fact, cover all of those sonatas, which are available now in a plain five-CD set on the Sony label; she also recorded the piano concertos 9 and 19-27 with Colin Davis and the English Chamber Orchestra, which are a little more difficult to find right now.

ALTHOUGH SHE RECENTLY PASSED the traditional retirement age, pianist Alicia de Larrocha obviously has no plans to retire. She has just begun a recording project that will see her through all of the 17 sonatas and 25 concertos by Mozart. 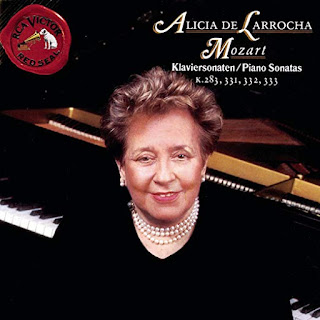 Last week the first instalment was issued, a collection of four sonatas that demonstrates the pianist’s masterful affinity for Mozart.

Although de Larrocha is quickly identified with Spanish composers – Granados, Albeniz and de Falla figure prominently in her repertory, and a new recording of Granados’ “Goyescas,” a sort of Spanish “Pictures at an Exhibition,” is due in September – it’s a mistake to pigeonhole her work.

Recording a piano can make as much of a statement as the work of the artist herself. It’s a difficult instrument to capture well, but RCA’s engineers have done a nice job conveying not only the color and range of the piano but also the spaciousness of the hall (in this case, an RCA studio) as well.

Which is kinder to the piano than the more brittle sound of de Larrocha’s earlier London recordings of Mozart.

Her work has a dazzling crispness, important to satisfying the demanding inner voices of the simple-sounding works. There’s an improvisational quality to the best performances of these pieces, and de Larrocha, no doubt on her umpteenth time through these, keeps that sparkle alive.

Of special interest to pianists will be her performance of the Sonata No. 11, a work that begins, unusually, with a theme and variations and ends with the well-known Turkish march. For an interpretation to be most effective, then, the artist must discover the plot of the piece. Listen to that theme and variations for a good example. It’s not just a sequence of sections: it’s a carefully-structured succession, and by the finish of it, de Larrocha conveys a triumphant sense of accomplishment. I’ve always believed that Mozart was giggling up his sleeve when he wrote his “Rondo all Turca,” and de Larrocha also has a great deal of fun with it.

Thanks to the recording project, her work is going to be mostly Mozart enough that she was invited to open this year’s Lincoln Center leg of the Mostly Mozart Festival tour. The event will be presented on Live from Lincoln Center at 8 p.m. Wednesday over public television station WMHT (channel 17) with a stereo simulcast broadcast on WMHT-FM (89.1 mHz). A non-simulcasted repeat airing will be at 11 p.m. July 17.

Also on the program are the popular serenade “Eine Kleine Nachtmusik” and a comic one-act opera titled “The Impresario” that spoofs the conceit of sopranos, with Frances Ginsberg and Sally Wolf as the women who compete most passionately for role. Vinson Cole is the tenor and Werner Klemperer plays the title part.

Keep an eye on the orchestra, too, because Albany’s Randall Ellis is the oboist. A former Albany Symphony member, Ellis has been touring with Mostly Mozart and paid a quick Fourth of July visit home between stops in Washington, D.C. and Manhattan.