From the Vault Dept.: Thirty years ago, the Albany (NY) Symphony offered a splendid performance of Mahler’s Fourth, one of the more accessible of that composer’s mighty works. These were the glory days of Geoffrey Simon’s association with the orchestra; the Australian-born conductor was the ASO’s music director for four years. He helped lead a festival of Australian music, of which component concerts are reviewed here and here.

MAHLER’S SYMPHONY NO. 4 is a conductor’s paradise. It’s the musical equivalent of painting a fine and detailed figure study, the combinations of instruments providing an exotic palette of colors. 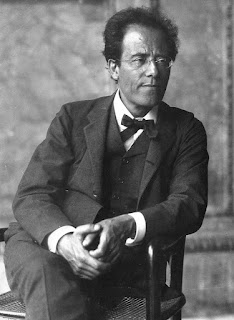 Albany Symphony Orchestra music director Geoffrey Simon gave the orchestra one of its best showings yet Friday night at the Troy Music Hall when he led them through this work. It was a thinking man’s Mahler, extruding passion from a considered plan. Mahler was a symphonic dramatist: his works have plots, characters, confrontations. Simon understands this construction and is as much director as conductor.

And, of course, there was the setting of settings in the Troy Music Hall, an edifice dating from the age of symphonic excess that Mahler brought to a zenith. The walls filled the soft sighs of the slow third movement with warmth; likewise, the terrible outbursts were given that extra flare of life.

We’ve been witnessing the steady growth of the ASO’s violins into a sections with cohesive, characteristic sounds; this symphony gave the cellos and basses a chance to show their stuff and it further confirmed the artistic development of the orchestra.

One of the toughest attainments in an ensemble is dynamic balance: brass are naturally louder than strings, but if the sections answer one another mezzo-forte there must be identical volume. The challenge is compounded when a group regularly plays two acoustically-different halls, and the gulf between the Troy hall and Albany’s Palace Theatre (where the ASO went on to perform Saturday, and every Saturday in these weekend concert pairs) is a mighty one.

So it’s a further Simon credit that this balance is being achieved. Mahler makes special demands for it: they were satisfied nicely.

Soprano Marilyn Richardson sang the fourth movement solo with a rich, darkly-hued sound, just right for the earth-mother character of the text (taken from the collection “Des Knaben Wunderhorn,” a source of much of Mahler’s lyrical material). Again, the interplay of voice and orchestra was handled deftly, with Richardson easing in and out of the beautiful, hard-to-sing stanzas.

She also opened the concert with Samuel Barber’s “Knoxville: Summer of 1915,” a setting of a wistful James Agee prose-poem. Her throbbing vibrato and rolled r’s weren’t as evocative of the child’s point of view that places this piece in the soprano repertory: I caught myself thinking how good her voice would sound in Mahler.

Continuing the ASO’s tribute to Australia was a ballet suite by John Antill taken from his 1946 “Corroboree.” It’s based on the ritual practices of some Aborigine tribes, and thus invites the same danger an American composer faces when working with Native American material.

Those dangers were deftly dispatched, however; Antill has written musical impressions that emphasize the rhythmic qualities of the dances and the Eastern influences on harmony and melody.

Each member of the orchestra’s augmented percussion section was doing triple and quadruple duty, and deserve commendation. Russell Maddox worked the tympani with ferocious precision, and Richard Albagli was his usual wizardly self, grabbing an especially nice moment with his work in the third movement, “Rain Dance,” on the vibes.

Music director laureate Julius Hegyi returns to conduct the penultimate pair of concerts this season on April 14 and 15 at the Troy Music Hall and Palace Theatre, respectively. The program includes music by Mozart and Stravinsky as well as the world premiere of Frank Wigglesworth’s “Janus.”