Guest Blogger Dept.: Do movies pander to the masses? Nearly a century ago, Robert Benchley argued the point in this 1920 Vanity Fair piece.

The Scientific Scenario: A Film Version of The Education of Henry Adams for Culture’s Sake.

SOONER OR LATER some one is going to come out and say that the movies are too low-brow. I can just see it coming. Maybe some one has said it already, without its having been brought to my attention, as I have been very busy for the past two weeks on my yearly accounts (my accounts for the year 1920, I mean. What with one thing and another, I am a bit behind in my budget system). 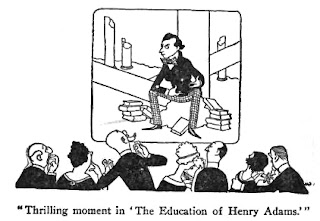 And whenever this denouncement of the movies takes place, the first thing that is going to be specifically criticized is the type of story which is now utilized for scenarios. How can a nation hope to inject any culture in the minds of its people if it feeds them with moving-picture stories dealing with elemental emotions like love, hate, and a passion for evening-dress? Scenarios to-day have no cultural background. That's the trouble with them. They have no cultural background.

Now, if we are to make the movies count for anything in the mental development of our people, we must build them of sterner stuff. We must make them from stories and books which are of the mind rather than of the body. The action should be cerebral, rather than physical, and instead of thrilling at the sight of two horsemen galloping along a cliff, we should be given the opportunity of seeing two opposing minds doing a rough-and-tumble on the edge of a nice problem in Dialectics or Metaphysics.

I would suggest as a book, from which a pretty little scenario might be made, The Education of Henry Adams. This volume has had a remarkable success during the past year among the highly educated classes. Public library records show that more people have lied about having read it than any other book in a decade. It contains five hundred pages of mental masochism, in which the author tortures himself for not getting anywhere in his brain processes. He just simply can't seem to get any further than the evolution of an elementary Dynamic Theory of History or a dilettante dabbling with a Law of Acceleration. And he came of a bright family, too.

I don't go in much for scenario writing myself, but I am willing to help along the cause of better moving-pictures by offering herewith an outline for a six-reel feature entitled “THE EDUCATION OF HENRY ADAMS; or WHY MINDS GO WRONG.”

The first scene is, according to the decorated caption: “IN THE HARVARD COLLEGE STUDY OF HENRY ADAMS, SCION OF AN OLD NEW ENGLAND FAMILY, THE NIGHT BEFORE THE BIG CEREBRAL FUNCTION OF HIS YOUNG MANHOOD.”

Henry Adams, a Junior, is discovered sitting at his desk in his room in Holworthy Hall. He has a notebook on the Glacial Period and Palæontology open in front of him. He is thinking of his Education. (Flash-back showing courses taken since Freshman year. Pianist plays “Carry Me Back to Old Virginie.”) He bites his under lip and turns a page of his notes.

Caption: “DOES TRANSCENDENTALISM HOLD THE KEY?... I WONDER....”

The second scene is laid in Rome.

Caption: “HERE, AFTER A YEAR'S WANDERING THROUGH THE HAPPY, SMILING LANDS OF EUROPE, COMES YOUNG HENRY ADAMS IN HIS SEARCH FOR EDUCATION. AND NOW, IN THE SHADOW OF ANCIENT ROME, HE FINDS PEACE, BUT NOT THAT PEACE FOR WHICH HE SOUGHT.”

He is discovered sitting on a rock among the ruins of the Capitol, thinking. He tosses a pebble from one hand to another and scowls. The shadows deepen, and he rises, passing his hand across his brow. (Flash-back showing the Latin verbs which govern the dative case. Pianist plays: “The March of the Jolly Grenadiers.”)

He walks slowly to the Museo Nazionale, where he stands pondering before a statue of Venus, thinking about Roman art and history — and about his Education.

Caption: “CAN ALL THIS BE FITTED INTO A TIME-SEQUENCE? CAN RIENZI, GARIBALDI. TIBERIUS GRACCHUS, AURELIAN, ANY OF THESE FAMOUS NAMES OF ROME, BE ADAPTED TO A SYSTEMATIC SCHEME OF EVOLUTION? NO, NO ... A THOUSAND TIMES, NO!”

He sinks down on a rock and weeps bitterly.

The next scene is in England and our hero is found sitting at a desk in his study in London. He is gazing into space — thinking.

Caption: “AND SO, ALL THROUGH THE LONG, WEARY SUMMER, HENRY ADAMS SAT, HEAD IN HAND, WONDERING IF DARWIN WAS RIGHT. TO HIM THE GLACIAL EPOCH SEEMED LIKE A YAWNING CHASM BETWEEN A UNIFORMITARIAN WORLD AND HIMSELF. IF THE GLACIAL PERIOD WERE UNIFORMITY, WHAT WAS CATASTROPHE?... AND TO THIS QUESTION, THE COOL OF THE SUMMER'S EVENING IN SHROPSHIRE BROUGHT NO RELIEF.”

He rises slowly and goes to the book-shelves, from which he draws a copy of “The Origin of Species.” Placing it before him on the desk he turns the pages slowly until he comes to one which holds his attention.

The book drops to the floor from his nerveless fingers and he buries his head in his arms, sobbing. (Music: “When You and I Were Young, Maggie.”)

“TWENTY YEARS AFTER ... HENRY ADAMS IS NO LONGER YOUNG, BUT IN HIS HEART LIES STILL THE HUNGER FOR EDUCATION. GOING FORWARD, EVER FORWARD, HE REALIZES AS NEVER BEFORE THAT WITHOUT THOUGHT IN THE UNIT, THERE CAN BE NO UNITY. THOUGHT ALONE IS FORM. MIND AND UNITY FLOURISH OR PERISH TOGETHER.”

The hero is now seen seated in a Morris chair in Washington, touching his finger-tips together in a ruminative manner. Arising slowly, he goes to the window and looks out over Lafayette Square. Then he lights a cigar and goes back to his chair. He is pondering and attempting to determine when, between 3000 B.C. and 1000 A.D. the momentum of Europe was greatest, as exemplified in mathematics by such masters as Archimedes, Aristarchus, Ptolemy and Euclid.

Rising from his chair again, he paces the floor, clenching his hands behind his back in mute fury.

Caption: “GOD HAVE MERCY ON ME! I CAN SEE IT ALL—I HAVE NEVER BEEN EDUCATED!”