From the Theater Vault Dept.: Here’s a charming little musical that had its world premiere in Cohoes, NY, in 1989; it had runs in Chicago and Manhattan in the years that followed. I’m going to give you my review first, followed by an interview piece that ran a week earlier.

“IT'S LIKE A MOVIE,” sings Rachel, a screen-struck character in Theda Bara and the Frontier Rabbi. And she's absolutely right. This musical, receiving its world premiere at the Cohoes Music Hall, boasts an improbable plot, unbelievable sets, wildly uncharacteristic songs and a gratuitous helping of beautiful women offering generous views of their bosoms. 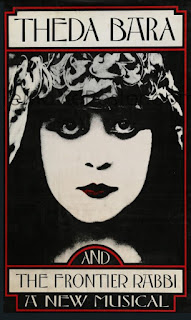 I'm going to see it again as soon as I can.

The creators, composer Bob Johnston and writer Jeff Hochhauser, call their show a “shameless musical,” and shameless it is in exploiting every entertainment style that's ever been overmagnified on the silver screen.

Set in 1917 at the height of Theda Bara's stardom, it opens with the glamorous vamp at her most austere and inaccessible, just as publicist Selwyn Farp (Raymond Wood) designed her. The gorgeous Theda, played in varying states of dress by pretty Liz Larsen, is regarded as such an evil influence that no self-respecting person would be caught watching her films.

That's the problem a young rabbi goes up against when a member of his temple catches him at the movies. Isaac Birnbaum is so flustered that he explains his purpose as information-gathering: he's going to deliver a sermon against the vile woman.

Ray Wills, who plays Isaac, has an elastic, boyish face, rather like the young Robert Morse. His incredible innocence doesn't seem at all unbelievable, even in the hilarious “Frontier Rabbi” sequence that explains his purpose in California.

We discover that Theda is in fact Theodosia Goodman, a tailor's daughter from Cincinnati, and she is easily persuaded to go to temple to meet a handsome rabbi. Although Jewish jokes abound in this show, it doesn't cater to a specific audience: conflicts and characters have a universal side.

The entire cast is so on-target that the laughs don't slip for a moment. And the material gives them plenty to do. Ellen Margulies and David Edwards return with two excellent performances as (respectively) Rachel, Isaac's headstrong sister, and Gordon Edwards, much put-upon director of Theda's “Cleopatra.” Matt McClanahan brings a splendid voice to the role of Marv, Isaac's friend and cantor. And Deb G. Girdler is at her brassy best in a collection of roles, including a hilarious turn as Lulu, Theda's would-be Hun successor.

Johnston and Hochhauser have put together a musical that knows its antecedents, but has a fresh, up-to-date sound and feel. It draws on any device it wishes to use, from a Sons of the Pioneers pastiche to a full-blown tap sequence. The music, while obviously the product of a single pen, bursts with a bouquet of attractive ideas. And the lyrics, credited to both collaborators, are among the most literate to hit the boards in many years, from densely-written patter songs to lovely, lean ballads.

A good musical never intrudes its music upon you, and, like a good meal, should leave you wanting more. Theda Bara and the Frontier Rabbi does this and more. The Act Two sequence in which Theda gets to “vamp” the rabbi is the sexiest thing I've ever seen on stage. But the scene, like the show, like Hollywood itself before the '20s set in, is innocent, breezy and lots of fun.

It runs through Feb. 12, but I'd order tickets soon: this is a pack-the-house winner.

THE WRITER LOOKS BOOKISH: thin, bespectacled, his dark hair short and fleeing from his temples, he wears a cardigan sweater over a cotton shirt. The composer looks like he just got back from a ski trip – he's tanned and dressed in flannel.

They seem like an unlikely combination, but like so many who collaborate closely on a creative project, they're at the point where they finish each other's sentences with ease.

Jeff Hochhauser and Robert L. Johnston have written Theda Bara and the Frontier Rabbi, a musical that gets its world premiere at the Cohoes Music Hall at 8 PM Friday. It's a fictional story with some for-real characters that takes an irreverent look at Hollywood in the 1920s.

“It revolves around the shooting of Cleopatra,” says Hochhauser. “Theda Bara and director Gordon Edwards existed; all the rest are fictitious, including the young rabbi, Isaac Birnbaum, who falls in love with her. I was interested in writing a musical about the early Hollywood days and some of the scandals that took place then. As I did more and more research I became enchanted with the story of Theda Bara, that vile and vicious slut who destroyed marriages – at least, as far as the public was concerned. One of the best-kept secrets of the time was that she was really only a nice Jewish girl from Cincinnatti who, because of the need to keep up the publicity front, couldn't have any kind of a social life.”

Hochhauser and Johnston have been working on this since 1984, when they met. “Jeff was doing an ASCAP librettists' workshop,” says Johnston, “at which he presented the first couple of scenes of this show. I liked what I saw and we started collaborating.”

“I was shopping for a composer – ”

”And I was shopping for book and lyrics.”

“We cross over a lot. Jeff has ultimate responsibility for the book and I have the same for the music. The lyrics are a sort of bridge for us.”

“I see that the lyrics tie in with the action, furthering it and so on – ”

Hochhauser is based in Manhattan; Bob is in Toronto. “We work a lot over the phone,” says Jeff. “Bob's been working in the NYU Music Theater program, getting his master's, so that gets him down to New York.”

“And Theda Bara has been in lots of workshops we've attended together. But this will be the first time it's had a full production. The last workshop was several months ago.”

Although set in 1917, they're quick to insist that you won't be seeing a turn-of-the-century musical. Asked if he recreates the musical style of that era, Bob says, “Not even remotely.”

“It has a musical score that looks at 1917 through 1989 eyes, says Jeff. “Bob's music is very rock-oriented. He grew up on rock 'n roll and grew up on Rodgers and Hammerstein. So we really complement each other.”

“A lot of scenes and songs require a kind of ridiculous accompaniment. `Arab Death,' for instance, has a this pseudo-Arabian feel, the sort of thing someone would think up after having done not too much research. That helps preserve the ersatz grandiose quality Hollywood was founded upon.”

The show has been optioned for a New York production. “And,” says Jeff, “there's the possibility of another regional production, but one never knows. I have every confidence the show will go to New York.”

Bob cuts in, “Because we're so desperate, we won't stop 'till it does! We know many teams who've gone through workshops with us and, like the rest of us, have had their good days and bad days but finally fall by the wayside and pick up other projects. We don't want to have that option. And we find that desperation is a handy motivation for getting things done.”

Both praise the Heritage Artists cast and production team highly. “We've surrounded ourselves with good people,” says Bob. “There's a feeling that this time we're going to get done what we want to do, that things'll work.”

Jeff adds, “And in this cast we have a collection of real hams. Several in the cast are used to being funny onstage. So it's a little like managing and all-star team. Every character is the best character, every song the best song.”

“The kind of show that we've tried to do here is one that's about something. And it's fun – it's got sex, it's got gags, it's got showstoppers – it's as close to Pajama Game as you can get for this generation.”