Getting Your Bach Back

SOMETIMES YOU NEED NO WORDS to make a convincing argument. Listen to violinist Isabelle Faust dance through the difficult bariolage passages in Bach’s Concerto in D Minor, and you will be convinced, as I am, that this piece originally was written for the fiddle, and not for a keyboard. It’s known today as a keyboard concerto because the only authentic manuscript comes from a collection the composer made of seven keyboard concertos, all of them thought to be recycling material from earlier works. 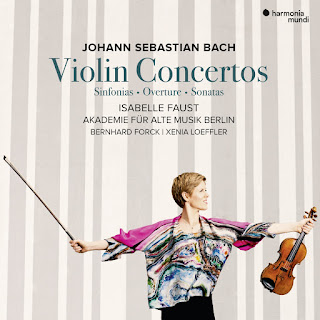 There remain doubts, because Bach scholars are aggressively opinionated, but not only do I say that Faust’s interpretation of this work is authentication enough – I’m also prepared to give the keyboard crowd permanent ownership of the concerto in F Major, BWV 1057, which is better known as the Brandenburg Concerto No. 4, in which guise it’s a violin assuming the keyboard’s role. But I find the keyboard to be more idiomatic.

Which shouldn’t be surprising. Bach knew his way around the keyboard, be it harpsichord or organ, and could write as idiomatically for those instruments as he could for the violin, as a player of which he also excelled. But it’s not just the keyboard repertory that Faust is plundering in this new two-CD collection: she also takes aim at the flute, seizing as she does the Orchestral Suite No. 2, BWV 1067. The flute-solo version is in B Minor, but Bach authority Joshua Rifkin maintains that an earlier version in A Minor featured the violin, and Faust’s performance does nothing but support that notion with an engaging, danceable approach that meshes perfectly with the original-instruments approach of her accompanying ensemble, Akademie für Alte Musik Berlin, conducted by concertmaster Bernhard Forck.

Accompanying may not be the right word – in keeping with Baroque concerto tradition, they’re full partners. The solo instrument may have some virtuosic thoughts to offer here and there, but she’s also playing as part of the ensemble in the tutti passages.

The concept of this album is audacious and simple: present an array of Bach’s works for violin and orchestra, interspersed with a few other ensemble textures. Thus we have the Concerto in D Minor, BWV 1052R, as the brilliant beginning, followed by another old favorite in a different guise: the Sinfonia from the Cantata No. 174, “Ich liebe den Höchsten von ganzem Gemüte.” It’s the opening movement of Bach’s Brandenburg Concerto No. 3, but where the original was a romp for strings alone, for the cantata Bach added accents of winds, oboes and horns adding unexpected color.

The Concertos in A Minor, BWV 1041, and E Major, BWV 1042, are the only ones definitively known to feature solo violin, and thus are featured on every violinist’s inevitable recording of Bach’s concertos, usually alongside the Concerto for Two Violins in D Minor, BWV 1043. They’re probably encountered more often in recordings than in concert, because each is a little too brief for the solo spot, and the Double Concerto requires an extra soloist.

It can be difficult to find a sympathetic partner. In 1946, Heifetz recorded one of the parts on a film track and played against it for a recording conducted by Franz Waxman; critics still lob barbs at the implied egotism even as they can’t help but laud the playing. Here Faust is joined by Forck, and they share both an interpretive approach and a tone that has period-instrument austerity with all the warmth that can be mustered therein. This is actually good for the work’s slow middle movement, the natural sweetness of which can be swamped by laying too much manufactured emotion on top of it.

Bach’s Keyboard Concerto No. 5 in F Minor (BWV 1056) is another with a convincingly possible violin provenance, at least in its outer movements, while the middle movement is another cantata refugee, in this case no. 156. While it’s tough to get the sound of piano or harpsichord out of your memory (and, if you get as tied to visuals as I do, the scenes from the movie “Slaughterhouse-Five” in which Glenn Gould’s slow movement counterpoints some heartbreaking images), there’s an interpretive integrity and freedom that reminds me of Nikolaus Harnoncourt’s early Concentus Musicus recordings, which trailblazed this kind of approach.

And there’s another double concerto here, this time for violin and oboe. It’s drawn from a version for two keyboards (BWV 1060), and has been recast both for two violins and in the present configuration. We have oboist Xenia Löffler sharing the spotlight, reminding us of the sinewy confluence of sound oboe and violin produce, and Bach’s skill in structuring an ensemble sound to go with it.

The programming of each of the two discs is also laudable, giving an excellent variety of tempo and texture. A pair of trio sonatas lightens the sound; on the first CD, it’s the one in C Major, BWV 529, for two violins and continuo; disc two offers the Trio Sonata in D Minor, BWV 527, for oboe, violin, and continuo. Whatever the origins of the works, they’re known now in organ arrangements, so we have more examples of skillful reworkings of the material.

Rounding out the variety of works are two more cantata movements and a putative one: The stately Sinfonia from the cantata “Ich hatte viel Bekümmernis,” BWV 21, with oboe and violin again wending their way through a fabric smoothed by the use of a continuo of organ and strings. That’s also the case with a brief adagio from the Cantata No. 182 (“Himmelskönig, sei willkommen”), this time pairing flute with recorder in a dignified dotted-note procession. And the Sinfonia in D Major, BWV 1045, pits solo violin against an ensemble of brass, winds, strings, and continuo, a single movement that seems a tantalizing fragment of a full-length piece or part of a lost cantata – or both. The trumpet fanfares add a touch of nobility to the violin’s busy pyrotechnics, and the movement comes between two of the most familiar concertos for violin and strings – so it has a fitting home in this collection.

Recorded sound is excellent. The dynamic range includes very pp pianissimi, which makes this better for headphone listening than, say, in the car. The commitment to historically informed performance can become a bit affected at times, as when the quarter-notes that open the Violin Concerto in E Major are turned into dotted eighths, but this is such a smart and joyous collection on the whole that it’s been on my playlist for several days – with no sign of leaving soon!