From the Bookshelf Dept.: Thomas Berger’s penultimate novel, Best Friends, again visited the realm of domestic treachery previously limned in such titles as Sneaky People, Neighbors, Meeting Evil, and The Feud. You should have no trouble finding a copy – Berger’s books remain in print, as they should. Here’s my review.

ROY AND SAM ARE SUCH CLOSE FRIENDS that each has learned to live with the peccadillos of the other, although Roy is beginning to question his tolerance. With a bond that stretches back to childhood, the title characters of Best Friends exemplify the kind of pairing characteristic of Thomas Berger’s fiction – and deftly analyzed in a recent Voice Literary Supplement essay by Jonathan Lethem. 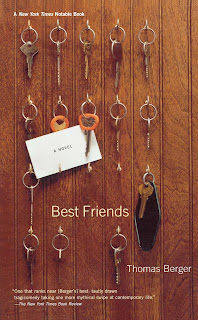 This duality was found in single characters like Little Big Man’s Jack Crabb, shuttling between his upbringings as a white man and as an Indian, and the psychotic Joe Detweiler in Killing Time; in the identity swap of Earl Keese with his new neighbors Harry and Ramona (Neighbors), and in the protagonist’s permutations in Being Invisible and Changing the Past, in which each re-imagining is sparked by a wish to change as much as a need to bridge that gap to an existing ideal.

Given Berger’s fiendish sense of humor – a quality that too often prompts the unwary reader to label him a comic author – it was inevitable that he should present the most awful aspects of a man’s other side as a murderous but charming fellow in the dark-as-night novel Meeting Evil. Best Friends is another meditation on that theme, but here it becomes a mystery story as Roy struggles to understand the nature of his friendship with Sam when the latter is suddenly hospitalized.

Even as Roy follows his usual routines (dealing in vintage autos and dealing with several recalcitrant girlfriends), he’s forced to scrutinize these activities anew, a perspective he gains through a sudden interest in Sam’s wife, Kristin. If Roy’s previous behavior seemed narcissistic, here he has unwittingly tapped into a deeper strain of self-interest: he’ll eventually confound all of his received expectations by discovering just how unique is his best friend’s wife.

Where Berger’s previous novel, The Return of Little Big Man, was an orchestral suite, Best Friends is a Baroque triple concerto, with the soloists constantly shifting in timbre against an always surprising background.

Surprising, but not inconsistent. Berger’s characterizations draw as much from discordant situational juxtapositions as they do from dialogue and inner thought. Trying to protect Francine, a longtime girlfriend, from her violent ex-husband, Roy physically sandbags the man in a display of parking-lot heroics – but the encounter results in the man later beating his ex-wife to death. Roy impulsively turns to Kristin for comfort because he has nobody else to turn to, least of all his sister:

“All their lives, Robin had been the worst person with whom to seek solace. He did not dare to approach her with anything to announce but a success, and of course she would endeavor to disparage that. A failure of any kind would make her crow. In the case at hand she would say, ‘Sleep with dogs, get up with fleas. What do you expect when a trollop is your idea of a suitable girlfriend?’ Her idea of a woman for him was someone from her own circle of embittered divorcées with child-support problems: Ironically, people much like Francine in situation but presumably less bawdy or anyway more circumspect. Francine in fact had been a neighbor of Celeste Brownson, a pal of Robin’s whom his sister had urged him to date. ‘I call her Celezzy to her face,’ Francine told him, ‘and she doesn’t mind at all! Her trouble is, she can’t ever admit to herself that she basically hates men. Poor Evan! It must have been like sticking it into a bowl of cold risotto.’”

Thanks to the precision of Berger’s writing, a paragraph like the one above advances our understanding of Roy’s character even as it orchestrates his situation and finishes off with the little whip-crack of an unexpected laugh. And it’s a pleasure to read for the sheer beauty of its construction.

Berger has a playwright’s ear for dialogue, but stylizing the speech of his characters to suit the medium of print. His people carry props and occupy settings, but not much more than is needed to reinforce who they are.

Offstage action is also important. Hospitalized Sam, little visited, exerts an influence through the conscience-tugging power of his presence alone. At the same time, Roy is confounded by the unseen movements and conversations of his sister, his secretary and others as his fascination with Kristin grows.

Much of the pleasure of reading this compact novel is in gleaning and connecting the undercurrents, even while glorying in the narrative voice. With a cascade of fascinating insights into the nature of love and sex and friendship, and with an unexpectedly satisfying resolution, Best Friends once again asserts Berger’s staying power as one of the finest craftsmen working in the English language.