YOU’D THINK THAT the sweeping orchestral complexity of Berlioz’s music would resist reduction, but his buddy Liszt turned the Symphonie Fantastique into a piano piece almost immediately. Liszt was well-motivated: it was easier for a soloist to spread the word (or, in this case, the music) than it was to hire an orchestra, and Berlioz gave his oddly mixed approval. Mixed insofar as he favored the effort, but never offered his opinion of its quality. 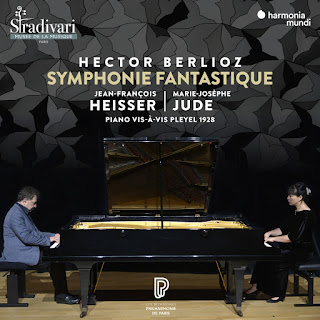 Jean-François Heisser has gone Liszt one better: he arranged the piece for two pianos. Heisser is a pianist and conductor who has led the Nouvelle-Aquitaine Chamber Orchestra for nearly two decades, and he’s artistic director of the Soirées Musicales d’Arles and president of the Maurice Ravel International Academy, among other notable accomplishments. And he’s one of the piano pair on a new recording of his arrangement, alongside Marie Josèphe Jude, with whom he has worked in that capacity since 1997.

Although “alongside” is the wrong term for this venture. They’re face to face at a Pleyel Double Piano, an instrument that contains two complete workings but takes up less space than a pair of instruments. It was created in 1897, and 74 of them were built during the next three decades. The one used for the recording is kept at the Paris Museum of Music, and it’s kept in perfect working order, as you’ll hear on this disc.

The Symphonie Fantastique offers an excellent way into the intimidating world of classical music: its programmatic qualities are obvious, it offers a massive dose of sympathy to the lovelorn, and the final movement, the Witches’ Sabbath, boasts an over-the-top array of orchestral effects (and the best use of the Dies Irae tune). It certainly worked for me. 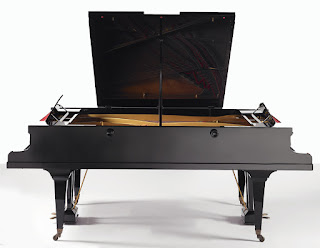 Ironically, that movement is also the most effective in the two-piano version, which took me by surprise. Not that the rest of it doesn’t make for exciting listening, but the intricacies of the Witches’s Sabbath – which include a tolling bell, the ponderous Dies Irae, skeletons frolicking, and a cauldron bubbling over – achieve a fascinating transparency in the comparatively monochrome shadings of the piano. The nimble performers carouse through the challenges with ease.

No matter how well you know the piece, this is a transcription not only unique unto itself but also a tool that will open your ears anew to the richness of the orchestral version. It sits by itself on the recording, but what can you program with it? There are no solo (or duo) piano works by the non-pianist Berlioz. He played the flute well, the guitar fairly well – his instrument was the orchestra, although you could argue that it was also the human voice.

Both aspects are in evidence in a new recording that pairs his Harold in Italy with the song cycle Les nuits d'été. Harold is as close as Berlioz came to writing a concerto – being Berlioz, he made the soloist an actor in a dramatic rendition of scenes from Byron’s poem. He’d been commissioned by Paganini, who had a new viola to show off, but the virtuoso was dismayed to learn how un-virtuosic the solo line was. “I don’t play all the time,” was Paganini’s complaint.

Even if the viola repertory were as overstuffed as that for the violin, this piece would be a mainstay. Although it has none of the fireworks of a romantic-era concerto, it demands a compelling voice from an accomplished player, and Tabea Zimmermann brings to it a wonderful talent and imagination. I grew up on a variety of recordings featuring William Primrose, and, although I wish not to slight his playing in the least, Zimmermann has a wider palette of color that she applies skillfully, even to the point of shading the 16th-note runs in the first movement with a delightful grin. 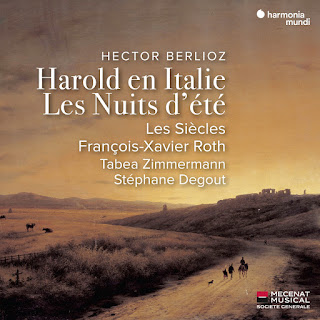 The “March of the Pilgrims,” the second movement, features a long passage of arpeggios for the viola, which are broken chords sweeping across all four strings. The soloist is asked to play that section sul ponticello, bringing the bow close to the bridge for an ethereal sound, but nobody I’ve heard before has produced the magic Zimmermann achieves.

François-Xavier Roth conducts Les Siècles, an orchestra he founded 15 years ago; in keeping with their tradition, they perform on instruments appropriate to the period in which a particular piece was written. Although Harold in Italy calls for a large number of players, there’s still a compelling transparency about their sound.

The companion piece is Berlioz’s song cycle Les nuits d’été, settings of six lovelorn verses written by his friend Théophile Gautier. The original piano-vocal version eventually was orchestrated by the composer for a smaller ensemble than he usually used, and the songs were distributed among a range of voices. Modern practice assigns the cycle to a single female voice, but here we have baritone Stéphane Degout, an elegant successor to Harold’s low-voiced viola.

Again, it’s all about color. A deceptively cheery Villanelle leads us into an abyss of loss and longing, with Degout’s voice shaking off its early majesty and taking on shadings of despair – the low note he takes in the third song, Sur les lagunes, is a killer. Absence, which follows, is paced with generous pauses that drive home the power of silence, while the low-instrument throbs in Au cimetière complement the descending melodic lines of the singer. Although Harold may seem abstract by comparison, both of these poetic journeys are rife with ambiguity, and all the more powerful as a result.