Sound of the Silenced

From the Vault Dept.: How loyal are you to your country? That was the nasty little question essentially asked of balladeer Richard Dyer-Bennet in 1953 when he was called to testify before the House Un-American Activities Committee. He had been named as a putative Communist by Burl Ives when Ives sang like a canary before HUAC, but Dyer-Bennet agreed to testify only if Telford Taylor, who was an attorney at the Nuremberg Trials (and a friend of Dyer-Bennet), could represent him. HUAC declined. Dyer-Bennet was blacklisted. He’d had a successful performing career up until then, and was able to continue at a very few sympathetic venues like the Village Vanguard. But he also took the opportunity to start his own record label, issuing discs he recorded in his own living room. They were meant to promote his concert appearances; they were haphazardly distributed; yet the initial volume sold like crazy. Twenty years ago, Smithsonian-Folkways issued that album on compact disc, and has since made all of the Dyer-Bennet recordings available. Here’s my long-ago take on the first volume. 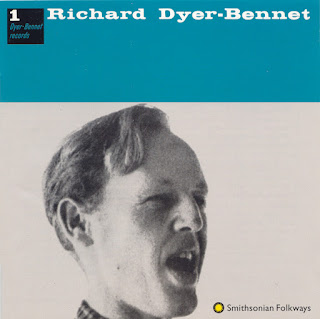 RICHARD DYER-BENNET’S APPROACH TO FOLKSONGS is about as far as you can get from the cragginess of field recordings without sounding like a slumming opera star. He was a unique and very stylistic singer who stuck to his guns in the way he arranged and performed the songs he enjoyed, so it was only natural that he should found his own record label to preserve the integrity of his performances.

It was a timely move. Dyer-Bennet resisted the House Un-American Activities Committee’s attempt to railroad him into naming names, thus ending his access to most commercial outlets as the 1950s got underway..

The 15 recordings that appeared under his name were released by arrangement with Folkways beginning in 1955. They’re now available through Smithsonian Folkways, and the first volume absolutely vindicates Dyer-Bennet’s approach to traditional songs. Unique as he sounds, the songs are about the songs, not the voice, but only because the voice is so well used that it’s practically transparent.

The sixteen selections are collected into three groups with the hope that you’ll listen to each group as a programmed entity–a nice touch. The eight songs in the first group are melancholy Irish, English and Scottish ballads, group two’s three songs are upbeat love songs while the remaining five are comfortingly hopeful, finishing with the wistful “Lonesome Valley.” It’s an effective progression of moods.

This volume also includes a biographical essay by Dyer-Bennet’s daughter, Bonnie, and a helpful examination of the singer’s vocal technique by writer and voice teacher Conrad L. Osborne. This is also the only volume available as a commercial pressing; the rest can be bought through Smithsonian Folkways, which will custom record them for you.

Editorial update: Smithsonian-Folkways ultimately pressed volumes 1, 2, 5, and 6. The rest are available as CDRs, and some of those are also available as digital downloads. The website is here.