From the Food Vault Dept.: The Lake Placid Lodge I visited in 1996 is not the place you’ll visit now. The property has continued to develop and improve, but it remains one of the very finest destinations in the Adirondacks. Here’s a 32-year-old glimpse of the place.

STEVEN GILES IS YOUNG AND AMBITIOUS. The London-born chef looks like Charlie Sheen, although Giles probably considers that it’s he whom Sheen resembles. Which is exactly the right attitude to have when you’re professionally engaged in high-profile cookery. 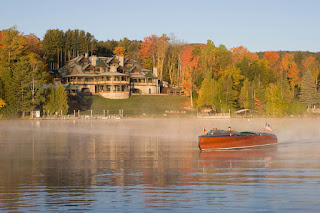 Giles has been executive chef at the Lake Placid Lodge for four months, brought from the San Ysidro Ranch in Santa Barbara. As a Relais & Chateaux property, the Ranch adheres to extremely high standards; the Lake Placid Lodge takes its place among that rarefied company next year, and Giles’ work deserves all the recognition it can get as a vital component of the Lodge’s success.

My wife and I spent a couple of days there recently in order to meet the chef and sample his wares. Mild thunder and an attractive lightning show played over the mountains across the lake as we arrived, and we had an even better show of it during dinner on the open-air porch. It was an unexpectedly romantic accompaniment to our first night’s dinner--not to mention a farewell to the spring menu.

As with all great chefs, Giles’ secret is both simple and complicated. Simple: fresh ingredients. Complicated: what he does to them. He works the purveyors aggressively, persuading them into a part of the world they don’t often cover.

We enjoyed the result displayed in the first course: sesame-crusted ahi tuna, prepared very rare but with a quick grill of the outside that sears the meat and roasts the sesame seeds. It’s served on a salad of seaweed and fennel, barbecued, with a light mayonnaise touched with the sharpness of wasabi.

The Oriental cooking heritage demands freshness, and it showed in the blue crab and lobster-filled spring roll, in which the seafood flavor prevailed but was well complemented by a dandelion and grapefruit salad.

Giles is keen to achieve an identity as an Adirondack-style chef--but there’s not much precedent for it in the realm of fine dining. So he’s inventing the category as well. Adirondack squab breast is a terrific entry, a light meat with a robust flavor that stands up well to the accompaniment he offered of wild mushroom spaetzle and a dark sauce.

Another lobster preparation for the entrée: this time it was grilled, whole, served with a white truffle butter set off with sweet corn. The richness was built into the dish, which also was strategically opened for us. One the side were pasta made from red peppers and crisped leeks.
Red flannel hash reaches into American lore, with Down East connotations. A purist once wrote that it’s 85 percent beets, ten percent potatoes, three percent onions and two percent bacon, with no extraneous meat or sauce. And it was a meal. Giles served it as a good-looking and delicious accompaniment to free-range chicken breast, grilled on an oak plank.

A beautiful dining room has the appointments of a rustic lodge without sacrificing any elegance, but the view from the porch is stunning in all but the worst weather. Our tour of the summer menu was conducted the next evening, with patches of clear sky showing through the low clouds, from porchside.

So: an amuse of a half-shell oyster, accented with shallots and corn and chile oil, dusted with pepper. With a taste of Perrier-Jouet champagne. We moved immediately into one of the richest, most guilt-inducing appetizers I’ve ever tasted, a seared foie gras from the Hudson Valley, finished in a Sauternes reduction, served on a roasted garlic and potato waffle.

Must there be a variation on everything classic? The salad, for example, featured grilled romaine leaves, and I’m all for it. We’ve dulled our palates with a parade of bland food, and these differences wake up the taste buds and remind us to savor our food.

Seabream is a firm, fleshy fish that sautées nicely and speaks for itself on the plate; the parsley sauce gave it a tangy accent. In what I think of as the Adirondack style, it was served with a hearty accompaniment of a terrine of potatoes and tomatoes, along with a carrot and radish combo.

Roast saddle of lamb is one of my longtime favorites, but meat tasted milder than I expected. Whether it was characteristic of this cut or it was competing with the wine I’m not sure, but the garlic-almond sauce gave it a needed flavor. Rosemary is a traditional lamb seasoning; on this dish, it was baked into an apricot polenta and served on the side, a superb contrast of flavor and texture.

We finished with a new dessert: hickory nut and licorice parfait, with an impressively tall orange wafer. Sorbets and ice creams are made on the premises, and you won’t want to miss them.

The meals were accompanied by a superb selection of wines, some chosen by Giles, others picked by the Lodge’s new restaurant director, Mason Cobb, who brings a fine New England sensibility to the operation.

Because we were sampling a range of portions and products as guests of the hotel, no standard prices were reckoned, but you should figure on spending $40-$50 per person for a complete meal, not including drinks and a tip.