BE-BOP WAS THE FIRST SIGNIFICANT JAZZ STYLING to achieve popularity without first having been co-opted by white musicians, but its formative years – 1942-44 – went largely unrecorded because of a ban imposed by James Petrillo, hotheaded head of the American Federation of Musicians. Being as much a rebellion against as an outgrowth of swing, bebop wasn’t about to steal many Benny Goodman fans, but its joyous angularity found fans aplenty. 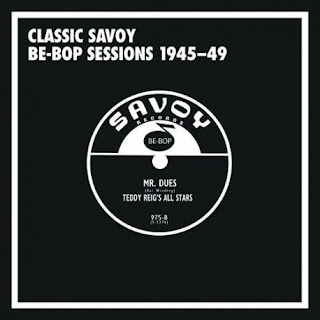 But fans need records to collect, and records need producers with the vision to encourage and capture performers still courting recognition. For the Savoy label, that was Teddy Reig, an ebullient jack-of-all-(music)-trades who landed in the producer’s chair in time to record a quartet fronted by tenor-sax genius Dexter Gordon. This was in December 1945, and started a run for Reig that would last until the middle of 1949 – including a few months in 1948 when he ignored another AFM ban and recorded some sessions anyway.

As Bob Porter observes in his introductory notes to the Mosaic Records set “Classic Savoy Be-Bop Sessions 1945-49,” “While there had been some bebop on Savoy prior to Teddy’s stewardship, things began to blossom as his activity increased.” And while bop wasn’t Reig’s only pursuit (he shepherded “The Hucklebuck” to its hit status, for example), he recorded enough to fill most of the ten CDs that comprise this set – and that’s without Charlie Parker’s contributions, which are easy to find elsewhere.
Dizzy Gillespie, who, alongside Parker, developed be-bop, was nearly 30 when these sessions began, but that makes him an old master alongside the younger talent woven throughout the songs on this set, including pianists Bud Powell (21) and John Lewis (25); saxophonists Stan Getz (18), Sonny Stitt (21), and Allen Eager (19); trumpeters Kenny Dorham (21) and Fats Navarro (22); trombonists J.J. Johnson (21) and Kai Winding (23), drummer Max Roach (21); and vibes wizard Milt Jackson (22). And in 1949 we find, for one session apiece, Sonny Rollins (19) and Gerry Mulligan (22). In other words, we’re hearing players who grew up with swing but were inspired to share this rebellious pursuit of a different sound.

Tenor sax player Allen Eager grew up playing with those bands – he worked for Woody Herman and Tommy Dorsey, among others – but by the time of his 1945 debut as a session leader, he was fully embracing the new idiom, inspired by the sound of Lester Young and propelled by the similarly minded Max Roach.

Stan Getz was fresh out of the Woody Herman aggregate, with stints with Jimmy Dorsey and Benny Goodman not far behind him, when he made his Savoy debut in 1949 leading an ensemble that included such former Herman bandmates as fellow saxmen Zoot Sims and Al Cohn, trombonist Earl Swope, and guitarist Jimmy Raney. They cut a quartet of Cohn-arranged Cohn compositions layered with a honeyed sweetness, especially the ballad “Stan’s Mood,” a showcase of Getz’s tender side. It’s a session looking ahead to cool.

Throughout the set, we hear some of the players en route to a characteristic sound – Dorham, for one – while others drop more fully formed, like Bud Powell in his first recordings as a bop pianist, backing the formidable Dexter (and already adding his unique vocalizations), and, a few months later, as composer, with “Bebop in Pastel” (later titled “Bouncing with Bud”) and “Fool’s Fancy” (later: “Wail.”)

Powell is a key member of a session by Gil Fuller’s Modernists (Sept. 1946), with trumpeter Navarro leading a group that included fellow trumpeter Dorham; Sonny Stitt, Morris Lane, and Eddie De Verteuil on reeds, and with Powell, bassist Al Hall, and drummer Kenny Clarke making up the rhythm section. Fuller already had proven himself with arrangements for some of the top swing bands, but made an effortless transition to bop, shaping the numbers loosely enough to accommodate extended solos. Although Navarro is the nominal star, Stitt steals the show throughout with fluid, imaginative lines in the Yardbird vein.

Fuller returned later in the month to arrange a date fronted by another under-20 talent, bassist Ray Brown, who borrowed five fellow players from the Dizzy Gillespie Orchestra, including Diz himself, to fill an octet for which Fuller wrote and/or arranged four busy numbers that happen to also feature the recording debut of tenor sax master James Moody. The set finishes with one more Fuller session, this time with a big band (some members drawn from a recently disbanded Dizzy Gillespie orchestra) that recorded four crisp Afro-Cuban-tinged numbers in 1949 that looked ahead to the ’50s.

It’s a who’s-who of players along the way. Here’s Tadd Dameron at the piano, then here comes the protean Hank Jones. Art Blakey sits in for a few sessions, and next thing you know Milt Jackson and John Lewis appear. The be-bop style may have a certain uniformity in these tracks, but the voices, individual and collectively, are refreshingly varied.

Mosaic collections gather as many alternate takes as make sense for the release, but in recent years those tracks have been gathered at the end of CD side. Not in this case. They’ve gone back to the practice of grouping the takes together, which makes a lot of sense: you want to hear the development of ideas in these sessions, because so much was born in front of the microphone. There’s some rough recorded sound in the earlier sessions, but it soon settles into consistently high fidelity, well served by Mosaic’s remastering despite the lack of original sources in many cases. The collection fills an important niche in be-bop’s history – and the history of jazz in general.