On the Other Hand

Given the Choice Dept.: When The Alt debuted in New York’s Capital Region last November, I wrote the piece below to celebrate the concept of culinary alternatives.

WHAT’S THE ALTERNATIVE when your larder isn’t yielding what the recipe demands? We’re familiar with some of the common ones: use white sugar and molasses in place of brown sugar, try yogurt in place of mayonnaise, add a little vinegar to some tomato sauce in place of ketchup – although if you’re running out of ketchup before the tomato sauce is gone, then your diet may need more than this article for help. 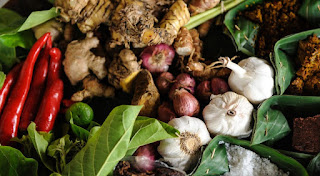 Such tips, once buried in the end pages of books like The Joy of Cooking, are now at the easy other end of an online search. But what’s the alternative when you just don’t want to eat a particular item? It’s a more subjective path, but it’s a path that opens new culinary vistas.

For example: You need protein, and you want to turn to the garden for more of it. The leading candidate: Kale. It’s way up there on the green-leafy protein scale, with 2.9 grams of protein in one cup (67 grams) of the chopped-up stuff. The only drawback is that kale is vile, a tough tangle of stems and resistance that probably costs you a gram or more of that protein in chewing alone. The alternative: Arugula. Although it contains only 0.6 grams of protein per cup, a cup of arugula weighs only 10 grams. On an equal-weight basis with kale, 67 grams of arugula contains 4.2 grams of protein, and a mere 6 calories versus kale’s 33. Of course, that’s a hell of a lot of arugula to chew through, and it needs dressing, so there go your calories.

Staying with protein for a moment, seafood like cod and clams are almost half protein, but cod has political implications: it’s been overfished to the point where you should avoid buying Atlantic cod. As for alternatives, you can turn to the likes of pollack or halibut, and if protein isn’t a priority – or, for that matter, flavor – there’s surimi, a phony crabmeat not-quite lookalike made from pollack byproducts.

If you’re trying to get away from beef and aren’t prepared to leave all meat behind, eat less of it and pay more by buying meat from locally raised grass-fed cattle. It will confirm the rumor that beef used to taste better. Purists insist that the finest flavor comes from not cooking it all; certainly, you would do well to stay on the red side of medium-rare. If the juices still run red, you’re fine; as one grass-fed beef enthusiast puts it, “When the water is gone (no juice) you have made jerky.”

Alternatively, try lamb. It’s generally raised more humanely than the other critters on the butcher shelf because it’s not as popular. A 2010 report from the American Sheep Industry noted that the U.S. produced about 163 million pounds of the stuff, compared to almost 27 billion pounds of beef. And lamb’s slightly higher calorie count is offset by the omega-3 fatty acids that grass-fed lamb contains.

Put a plate of pasta before me – topped with a tasty red sauce, with an accompanying slab of Italian bread – and any carbs-counting I’d planned goes bye-bye. So it’s an act of uncharacteristic discipline to replace that linguine with something healthier. Soba noodles, made from buckwheat flour, are touted as a good substitute. They contain fewer calories and no cholesterol, although the carb count is about the same. But hit the vegetable world and you’re home free. Spaghetti squash is so named because its roasted innards scoop out like a pile of pasta, and it has a similarly unobtrusive flavor. Arm yourself with a spiralizer, which is the gadget of the moment, and you can turn any number of items into a lanky substitute. It’s a particularly good way to make use of excess zucchini.

My guiltiest of guilty pleasures is ice cream. “Just have some fruit,” my wife will say when she has her own cravings under control, but we all know that the Fruit Satisfaction Level (FSL) plummets precipitously once the possibility of ice cream has been bruited. Frozen yogurt offers a somewhat similar pleasure, although you’re constantly aware that, as with substituting seitan for beef, it’s an unexciting also-ran. I prefer making my own fruit smoothie by food-processing frozen bananas and raspberries (or other berries) for a surprisingly high FSL.

I understand that the cilantro haters can with scientific justification blame this aversion on their genes. I don’t share that component, and thus can’t imagine a salsa or Middle Eastern salad without the pungent leaf, but substituting a little fresh mint or basil can go a little distance towards plugging that flavor hole, with a dash of balsamic vinegar added if said hole remains too large.

But the aversion I don’t understand is garlic. To me, cultivating a love for garlic is one more step, like learning to enjoy mushrooms and Brussels sprouts, on the road to a life complete, and the trouble with hating garlic is that there is no alternative. Ease your way into it by oven-roasting a head of the stuff until the cloves turn into paste, and spread it on some good Italian bread. Then go spiralize some zucchini.