PROKOFIEV’S FIRST PIANO SONATA is over a hundred years old; he finished his ninth and last in 1947. There hasn’t been a time more tumultuous in music before or since that period, yet he rode through it with his Romantic banner held high. Being Prokofiev, however, he redefined musical romanticism, and his piano sonatas exemplify this progress. 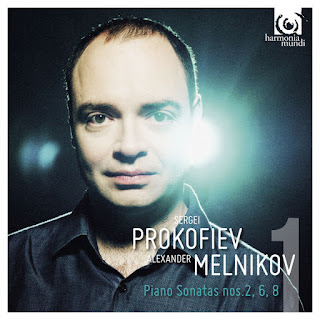 I’m hoping that Alexander Melnikov’s recording of three of those sonatas is the harbinger of more. This Russian-born pianist (a Richter protégée) made his mark with a recording of Shostakovich’s formidable Preludes and Fugues a few years ago, offering performances both electrifying and unifying, letting the composer’s distinctive voice shine in these Bach-homage settings.

That’s also what sets this Prokofiev recording apart from the pack. If you’re looking for music that’s relentlessly pleasant, don’t look here. The sonatas give an illusion of accessibility, but even at their most melodic, those melodies are in service to an architecture of unease.

The composer’s life was bracketed by wars. He exiled himself to Paris between them, but returned to his homeland as it entered its most repressive phase. This is the story being told in the Sonata No. 6, which was finished in 1940. He began work simultaneously on the ten movements that would comprise the sonatas 6, 7, and 8, eventually concentrating on the four for number 6 – and it’s one of the most difficult and disconcerting works in the piano repertory.

Prokofiev was a chess champion. Melnikov’s playing reveals that he shares a sense of structural appreciation that is able to see several moves ahead. And in this piece, those moves are tangled.

The opening theme features passages in thirds – ordinarily a pleasant interval – that switch between major and minor and have at their heart a three-note sequence that will recur throughout the piece. Harmonically, it’s a textbook example of instability, with the prominent octave-wide shouts of A and D-sharp reinforcing it.

It’s not until we hit the Poco piu mosso section a few dozen measures in that the piece succumbs to gentleness, but the insistent eighth-note rhythms that ushered us through the opening pages linger – felt, not heard, until they actually do creep in again and take over. Pianist Boris Berman hears in the movement’s second theme a hint of Juliet or Cinderella, central figures in the composer’s best-known ballets. There’s gentleness, and there are moments when the performer is asked to pound out chords with the fists (col pugno). Melnikov brings a sense of shrewd control to the music. He’s not there to tame it, but neither is it going to exceed what makes sense in the story it’s telling.

“The remarkable stylistic clarity and the structural perfection of the music amazed me,” wrote Sviatoslav Richter, who gave it its concert premiere and championed the piece. “I had never heard anything like it.” Shostakovich termed it “magnificent.” The furious outer movements frame a pair of more relaxed ones, although that eighth-note insistence is never far away, and Melnikov chooses tempos that keep those rhythms consistent. And the finale is a whirlwind, propelled by the airspace of missing (or so it seems) sixteenth note in the first theme. The pianists’s virtuosity is thrilling; the emotional effect breathtaking.

On its most superficial level, Prokofiev’s Sonata No. 2 starts with a flourish of lively melody in the right hand, its syncopated feel offset by the left-hand triplets that accompany it. But that isn’t enough: he smashes the theme to bits a moment later, then returns it to introduce a contrasting section. But Prokofiev the architect is also at work here, skillfully threading together a piece of pieces with compelling dexterity.

It’s a more exuberant sonata than the sixth, but it’s the exuberance of Prokofiev the schoolboy braggart (no matter that he’d long ago left school) determined to show off his skill. The sonata is a contrast to the more polytonal Sarcasms, written at the same time; but it was also the time of his comparatively straightforward first piano concerto and the wildly dissonant Concerto No. 2.

By focusing on the lyricism of the Sonata No. 2, Melnikov allows his dazzling technique speak for itself. Ostinato rhythms are accented with subtle grace; tempo changes intelligently devised.

Although the Sonata No. 8 was begun at the same time as No. 6, it finds a uniquely different direction, its lengthy opening movement finding a different momentum in the eighth notes that drive it. It also tells part of its story in nine-bar phrases, originally written to illuminate the character of Lisa in an unrealized film of The Queen of Spades. Melnikov gives it a Brahmsian majesty – but it’s the later, autumnal Brahms, at least until an Allegro moderato passage lights a firecracker under the theme.

If the second movement feels like a ballet, it’s using material Prokofiev wrote for another aborted project, a theatrical production of Eugene Onegin, wherein this material was scored for brass band! Thematic elements twine with one another at key moments, each procession nicely articulated by the pianist.

This skill is most exemplified in the middle section of the sonata’s third (and final) movement, where it slips into waltz time for a very un-Strauss-like waltz – yet there’s a pull at the notes that softens the beat, easing it into something approaching tenderness. And Melnikov shepherds this progression with control enough to let the notes work for themselves, with no unneeded sentiment. And then the fury of the movement’s first section returns, culminating in a few measures of wicked three-against-two passages before the hesitant finish.

This is a fabulous disc by a master technician who also knows the elusive heart and soul of Prokofiev and offers it here.