For Your Classical Consideration

THIS HAS BEEN THE KIND OF YEAR that imprints its many aspects on all edges of our cultural life, and we need to go into 2017 with music that both heals and inspires. Here are some selections from the past twelvemonth with which to get started.

Although this CD was released a couple of weeks before The Election, it couldn’t convey a more necessary post-election message. “America Again” is the title of prolific pianist Lara Downes’s debut on the Sono Luminus label, taking its title from a Langston Hughes poem that asks, “Let America be the dream the dreamers dreamed – Let it be that great strong land of love,” a wish that will be tried and brutalized during the next four years. 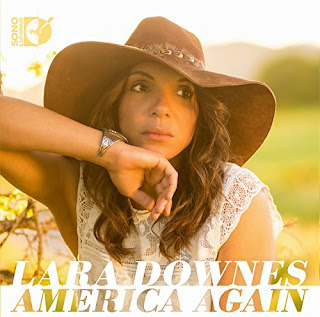 The 21 selections offer compelling juxtapositions of works by composers synonymous with Americana and less-familiar voices, as when Gershwin’s “I Loves You, Porgy” (after a Nina Simone arrangement) is followed by Rican-born Angélica Negrón’s “Sueno Recurrente.” The 35-year-old pursued the dream of journeying from one America to another, ending up in Brooklyn with a varied and inspiring career.

No other composer voiced the variety of the American scene as deftly as Duke Ellington, whose band of star instrumentalists allowed him to invent and refine for decades. Towards the end of his life, he devised three sacred concerts, and this recording, by Germany’s 16-piece Bigband Fette Hupe (Fat Horn Band), draws from the first two concerts for a tight, 70-minute exploration of Ellington’s genius. Mezzo Claudia Burghard sings the lovely “Come Sunday” (which Ellington recycled from an earlier work), while trumpeter Gary Winters doubles as narrator throughout and the band’s baritone sax player Felix Petry takes the tap-dance duty in “David Danced..” They’re also joined by the Junges Vokalensemble Hannover, a choir of 60 singers. Sometimes you need a perspective from abroad to appreciate what we’ve got at home.

Ravel was an admirer of Gershwin well before the American classical-music establishment was prepared to welcome him, but we’ve come to our senses and now appreciate the boundary-crossing magic of his music. Like many immigrants, some of his works have had rough journeys crossing those boundaries, suffering from inflated orchestrations that the composer didn’t intend. “An American in Paris” and Concerto in F get redressed in this recording, with Steven Richman conducting New York’s Harmonie Ensemble – and, best of all, with pianist Lincoln Mayorga soloing in the concerto. To label Mayorga a Gershwin specialist is to unfairly overlook that many astonishing facets of his career, but he’s the right person for the job. Rounding out the CD are Roy Bargy’s orchestration of the Three Preludes and the overture to “Of Thee I Sing.” 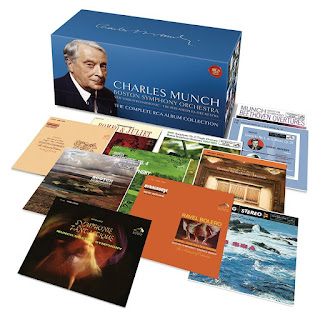 By the 1950s, the Boston Symphony had become America’s greatest orchestra in terms of versatility and consistency of sound. After a quarter-century with Serge Koussevitzky as music director, resulting in a skilled way with contemporary works, Charles Munch took over in 1949 for a tenure that coincided with the advent of long-playing records that soon went stereo. The 86 CDs in this big box set generally reproduce the cover art and playing times of the original LPs, but why would you want to hear anything after the final chord of Munch’s celebrated recording of Saint-Saëns’s Symphony No. 3? It’s a disc that (a little tape hiss notwithstanding) stands up to the best of them today, along with the Berlioz Requiem (and several other Berlioz works), some brisk Beethoven symphonies, plenty of Ravel and Debussy, and some works by Honegger, Menotti, Martinu, and Walton alongside the many warhorses.

Munch recorded concertos by Beethoven, Mendelssohn, and Prokofiev (No. 2) with Jascha Heifetz, and they don’t get much better. Those are also in a new Heifetz Stereo Recordings set, which seems like a silly demarcation except that my years, years ago, working in a record shop taught me that people get persnickety about such things. Here are 24 CDs that don’t reproduce original programming, so they’re packed with music and they sound terrific. Heifetz covered his concerto repertory in mono recordings but re-recorded many of them in stereo; much of this set, however, is given over to his Heifetz-Piatigorsky Concerts series of chamber-music recordings, which achieve glory in works like the Schubert C-Major Quintet and the Mendelssohn Octet, but are otherwise rather variable.

How does an artist’s interpretation change over the years? As we travel through the 114 discs of pianist Alfred Brendel’s recordings for Philips (which covers the bulk of his career), we visit Beethoven’s concertos three times, his and Schubert’s sonatas twice, Brahms’s concertos twice and go once or twice through sonatas and concertos by Mozart – with plenty of Schumann, Liszt, and Haydn along the way. This is Brendel’s core repertory, so don’t expect Chopin (there’s but one piece here) – but don’t be surprised by the Berg sonata. Brendel’s no-nonsense approach allows a just-right amount of romantic lushness, but it’s in service to the music. Still, this is for Brendel aficionados only.

One more big box: a long-overdue salute to guitarist John Williams, who made the bulk of his recordings for Columbia (then CBS, now Sony) over 40 years. All the major guitar-repertory pieces are here, all faultlessly rendered, putting Williams toe-to-toe with Julian Bream over on RCA (and with whom he recorded a best-selling series of duet albums – also on RCA). Once you’ve waxed Rodrigo’s Concierto de Aranjuez three times, you branch out, and Williams certainly explored his instrument, with recordings of plenty of Bach, little-heard works by Agustin Barrios, a survey of short pieces by Chilean guitarist-composer Horacio Salinas, concertos by British composer Paul Hart, and music by fellow-Australian Peter Sculthorpe, among many others, all of it rendered with virtuosity and taste. A DVD of Williams’s Seville Concert is included alongside the 58 CDs. 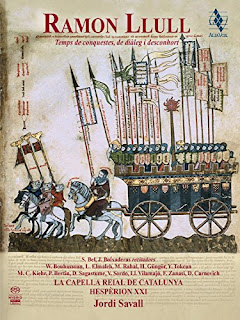 The most consistently beautiful recordings-as-artworks are the Alia Vox issues of Jordi Savall’s varied musical explorations. Savall and his ensembles have explored early music with an anthropologist’s care and an artist’s sense of building connections to present-day concerns. The two-CD set devoted to Ramon Llull, a 13th-century poet, mathematician, theologian, mystic, and, ultimately, martyr, narrates his life (an English translation is provided) and saturates it with music from the era, mixing formal sacred works with music from the Moorish lands Llull was known to visit as he sought understanding through dialogue.

Granada, on the other hand, is a single-disc journey through 500 years of that city’s history, ending at the dawn of the 16th century. We move between Islamic and Christian influences, with Syrian singer Waed Bou Hassoun lending authenticity to the sounds, alongside Moroccan Driss El Maloumi playing oud with Savall’s Hesperion XXI and La Capella Real de Catalunya, chimeric players and singers all.

Of course it was women’s voices that lured sailors to their rocky deaths. The Sirens were termed muses of the lower world, visiting revenge upon Persephone’s abductors. Rhinemaidens, a beautiful collection of Rhine-centered works for women’s voices, sounds every bit as gorgeous as you’d hope those sirens to be – without (so far) the concomitant risk. The bulk of the material is by Wagner, Schubert, Schumann, and Brahms, kicking off with Wagner’s “Auf dem Grunde des Rheines,” for 24 voices, harp, four horns, and two contrabasses, which combines into a profoundly disturbing sound, and including Brahms’s Four Songs, Op. 17, which also feature horns and harp. Ensemble Pygmalion, led by Raphaël Pichon, is also joined by mezzo Bernarda Fink in a Schubert Ständchen.

Colin Davis’s mid-70s cycle of Sibelius symphonies, recorded with the Boston Symphony, put Davis on the map as that composer’s champion – these are demanding works with long, tricky threads to them. He returned to the cycle 20 years later, recording them with the London Symphony for RCA, a commendable set that’s sonically improved over its predecessor. But a decade later he and the LSO went through them yet again, this time capturing in-concert performances at the Barbican Center. Davis knows his stuff, the orchestra sounds superb, there’s that frisson of having an audience present, and you get bonus performances of Kulervo, the Oceanides, and Pohjola’s Daughter. 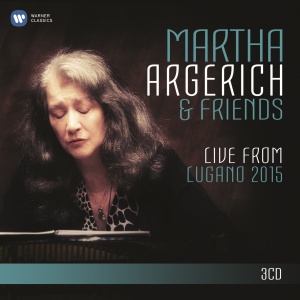 This three-CD set may be the penultimate offering from Argerich’s annual Lugano Festival – the funding has gone away – and that’s a shame. As the many recordings therefrom issued prove, you can trust the performers and the repertory. There’s a shrewd mix of familiar and lesser-known, and Argerich participates in only a handful of the pieces. This collection gives us Brahm’s Horn Trio, Op. 114, with clarinetist Paul Meyer in place of the horn; Turina’s evocative Piano Trio No. 2, performed by siblings Alissa, Natalia, and Jura Margulis (violin, cello, and  piano, respectively), and Ries’s Piano Quintet, Op. 74, scored for the same ensemble Schubert used for his Trout Quintet. Argerich appears in Debussy’s two-piano arrangement of Schumann’s Six Canonic Etudes, Op. 56 (with Lilya Zilberstein), Debussy’s En blanc et noir (with Stephen Kovacevich), and Schubert’s Variations for Two Pianos, D. 813 (with Alexander Mogilevsky). And she’s the pianist in a jaunty version of Bartók’s Romanian Folk Dances, Sz. 56, arranged for violin and piano, with Géza Hosszu-Legocky.

Brahms first piano concerto almost became a symphony, but the addition of the solo part doesn’t alter its symphonic grandeur. The piano maintains its own identity, but doesn’t seem to quarrel as much with the orchestra as, say, the soloist in Beethoven’s later concertos. In fact, you can get lost in too much thoughtfulness here, but pianist Paul Lewis has a voice of easygoing insistence, allowing him to let the phrases fall deliberately, rhythmically, but not too metronomically from his fingers. Lewis is of the Brendel school: thoughtful, but with access to fury, and he’s well matched on this recording with Daniel Harding conducting the Swedish Radio Symphony Orchestra. The disc is rounded out with Brahms’s Four Ballades, Op. 10, the first of which sounds a contemplative contrast with the concerto’s mighty finish. Each of the four pieces has its own identity and takes us on a different path until the fourth’s sweet, rhapsodic finish. 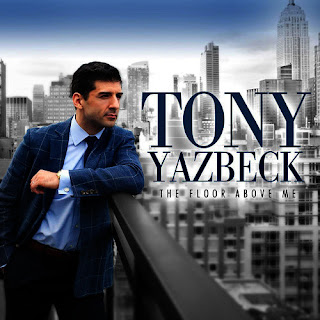 Tony Yazbeck: The Floor above Me (PS Classics)

As an aside from all the classical stuff above, here’s my favorite Broadway-related CD of the year, a
one-man show by Tony Yazbeck, fresh off the acclaimed “On the Town” revival, where he reduced the audience to a puddle with “Lonely Town.” This is a more cheerful collection, however, so we get “Lucky to Be Me” from that show, as well as “All I Need Is the Girl” to salute his triumph in “Gypsy” – and a witty narrative that threads his story through a series of song that aren’t all from the theater: “Both Sides Now,” “Dance with Me to the End of Love,” and “Got to Get You into My Life” are here, and he’s equally at home in them.