THERE WAS A TIME when it was considered unseemly to perform Bach’s solo violin sonatas without added piano, and Schumann was among those who obliged with accompaniments. That time is well behind us, and it’s now the mark of a fiddler’s mettle to record them solo, perhaps hitting them two or three times in the course of a career to show artistic development. Kyung Wha Chung has waited. Interpretive styles have shifted; the vogue of the historically informed performance style, which seemed obligatory twenty years ago, has eased, and Chung clearly has thought about how to color her approach to these monument. 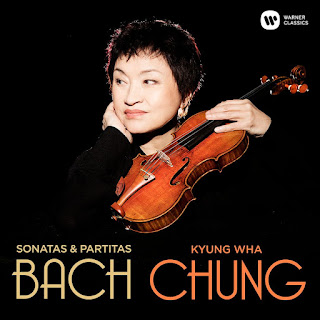 Sonata No. 1 banishes any worry about a too-historically informed interpretation, especially in the second-movement fugue, where phrases are allowed to linger and twine to satisfy the odd contrapuntal requirements – odd only insofar as the violin’s physical limitations (you can only play two adjacent strings simultaneously) require some of the contrapuntal lines to be interrupted and thus implied. And that sonata’s gorgeous third movement also enjoys a richly bodied treatment.

The sonata finishes with a presto taken at an appropriately lively clip and with none of the interpretive pauses that plague other performances.

As is usual (and following Bach’s own sequencing), the first sonata is followed by the first partita, a suite of four dance movements each of which is followed by a variation marked “double.” Chung allows herself to cherrypick some of the stylings of the original-instruments crowd. She doesn’t linger over note values as more romantically inclined performers have done, nor is she coaxing a fat tone from her fiddle. It’s an approach that suits the work, where each movement’s variation sheds a new light on what came before, and which she is careful to keep in a consistent tempo, although my ears aren’t used to the quick decay of each note in the partita’s Sarabande. And this is the first time I’ve seen the two parts of each movement not get track-separated.

Although the second sonata is structured just like the first (it’s a sonata da chiesa, to get technical, in a slow-fast-slow-fast pattern), Chung continues her journey deeper into HIP practice, giving the fugue some eccentric pauses and clipping the slow third movement’s accompanying figuration of eighth notes, which gained short-note dots only from later editors.

As if the composer picked up momentum as he went along, the last three of the works are even more profound and inventive, with a lengthy Chaconne the centerpiece of Partita No. 2 – and the whole set. It’s a set of variations on a slow theme that exploits a gamut of rhythmic and harmonic possibilities while also making use of much of the violin’s potential.

Violinists respect the Chaconne, but Chung’s performance has the energy of spontaneity. She’s true to its dance-like nature, and she lets her fiddle sing as the various voices Bach wove through the piece resound. If she’s a little too dramatic in the extended arpeggios, she balances it with lyrical sweetness in the D-Major middle section. And she sets tempos and tone for the partita’s preceding four movements that balance this edifice well.

The opening of Bach’s Sonata No. 3 is one of the oddest works in the bunch: a meditation on leading tones in four voices that challenges the violinist to inform the resultant broken with beauty. Chung doesn’t succumb to the temptation to be too gentle, but nevertheless keeps it lyrical, a quality needed for the fugue that follows, the most complicated of the three in this collection.

Most free-spirited is the Partita No. 3, in the sunny key of E Major, which resonates brightly on the violin’s highest string. The magic of the opening Preludio is the kaleidoscope of harmonic color produced by as metronomic an interpretation as possible; if Chung gets a little over-artistic at times, it’s still a high-kicking version. She balances the tenderness of the second movement with a gentle approach to the menuets that show up two movements later. These are effective, though measured, performances, but all in all a worthy tribute to Bach – and a worthy tribute to a violinist forced to remove herself from performing for several years, but now back and as accomplished as ever.


ITZHAK PERLMAN AND MARTHA ARGERICH recorded a performance ay Saratoga’s Spa Little Theatre in 1998, a tribute to the days when the finest chamber music artists would appear there; the subsequent disc gave us spirited versions of Beethoven’s “Kreutzer” Sonata and the sonata by Franck. Turns out there was more: The neglected Sonata No. 1 by Schumann, now available on a CD that rounds out the well-chosen program with works recorded in March 2016. 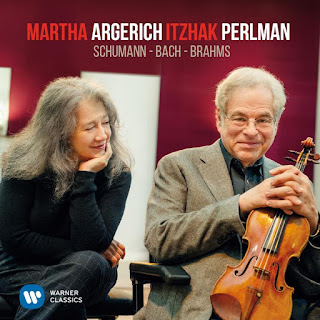 Both artists are front-and-center virtuosos who happen to collaborate well, with all the talent of Heifetz and Rubinstein but without, we hope, the clash of egos. Schumann has long been an Argerich favorite, and this is the kind of gorgeously sculpted performance that ought to place the piece where it belongs, in the leading ranks. Even better, they encore it with the same composer’s “Drei Fantasiestücke,” Op. 73, three short, haunting works that were written for clarinet and piano but have been appropriated by all who croon nicely. I thought the Heinz Holliger-Alfred Brendel version for oboe and piano was as good as this could get, but Perlman-Argerich have me reconsidering.

Brahms was one of three collaborators on a violin sonata for his (sometime) friend Joseph Joachim; although Schumann wrote the outer movements, it’s Brahms’s scherzo that endures, and it works nicely here to bridge to the closing work on the disc, the Sonata No. 4 for Violin and Keyboard by Bach. Unfairly overshadowed by the Sonatas and Partitas described above, the six with-keyboard sonatas have their own delights, revealed in this joyous performance. Can we get these two back in the studio again before long?