Let’s say Charlie Christian led a group with Roy Eldridge on trumpet, his old boss Benny Goodman on clarinet, Coleman Hawkins on tenor, Basie at the piano with Jo Jones on drums beside him and Jimmie Blanton, over from Duke’s band, on bass. A dream lineup, and it’s the effect you get from Glenn Crytzer’s Savoy Seven, an ensemble that knows its jazz history well enough to give us eighteen Crytzer originals with an uncanny feel of the ’40s in “Uptown Jump.” 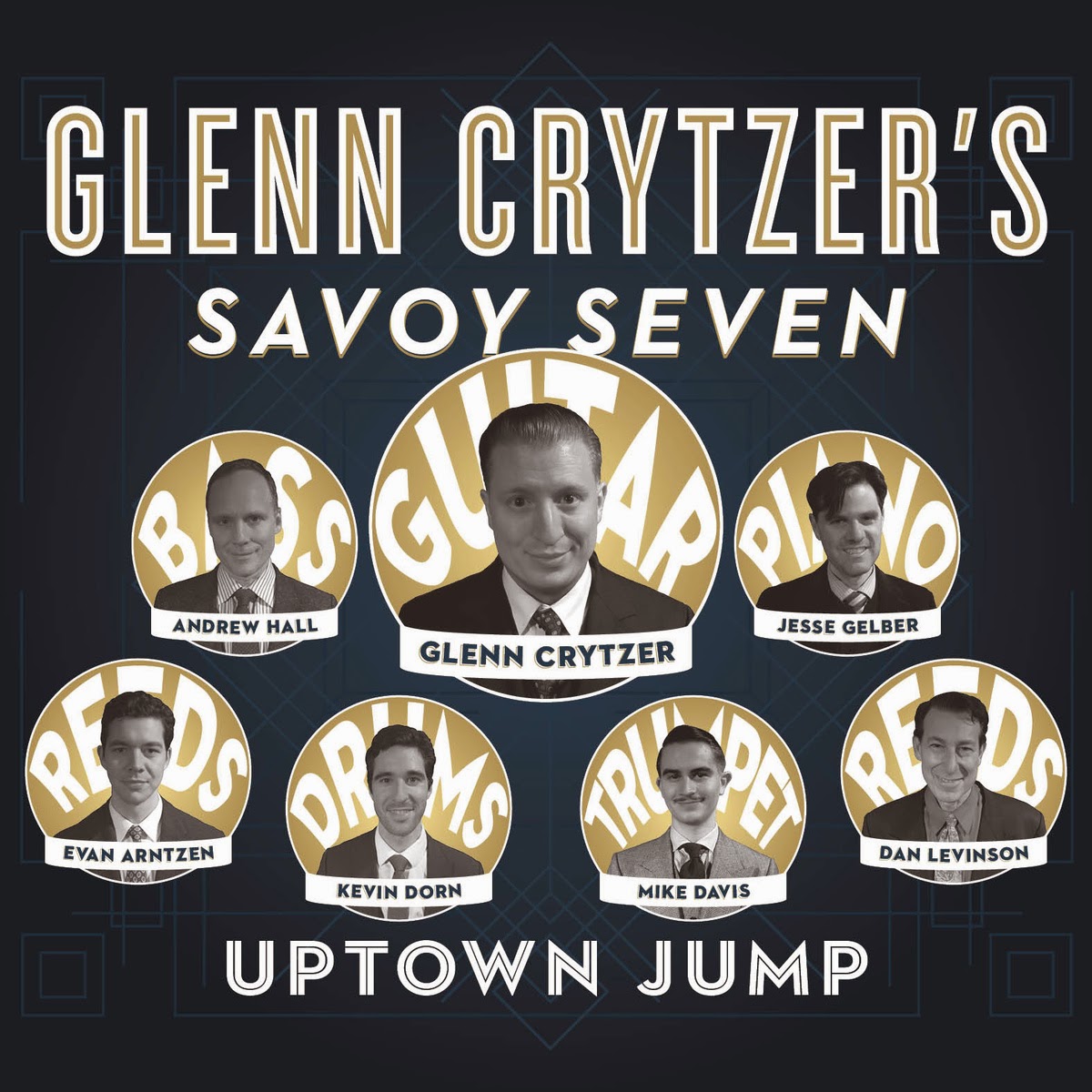 It’s guitarist Crytzer’s first full-length recording with this NYC-based septet, a crowdfunded album that sparkles with polish and taste. I thought there’d been a mistake at first: it’s a mono recording made with two vintage Neumann microphones, so it couldn’t sound more warmly ’40s, lacking only the groove noise of 78s. And the players have such an effortless-sounding, brink-of-bop feel to their playing that

“The Savoy Special” gets us off to an up-tempo start that would seem frantic if these guys weren’t so essentially cool, and then “Hop on the Mop” gives us a bright riff tune characterized by the quick mordent Dizzy Gillespie liked to put in his solos. Right away, trumpeter Mike Davis establishes his Eldridge debt (and that’s a good debt to carry), while Dan Levinson goes the full Hawkins on us.

The programming is nicely varied, with “What Did I Do?” in a solid Basie groove, contrasting with “Uptown Jump,” a flag-waver in which you’d swear Artie Shaw and Buddy Rich teamed for the opening – but it’s Evan Arntzen on clarinet, egged on by drummer Kevin Dorn.

Levinson turns to soprano sax to channel Sidney Bechet on “Le Fantôme de Saint Bechet” – that really should be the name of a New Orleans street – while Davis gives us more Roy in the medium-tempo “Not Far to Fargo.”

The arrangements, all by Crytzer, boast excellent voicings in the ensemble passages, possibly a legacy of this guy’s classical-composition background. But he clearly gave up Sibelius for Sauter along the way. Listen to “Road to Tallahassee,” for example, to hear some great combinations of trumpet and reeds.

This fellow has listened to a lot of bands. “Smokin’ the Weed” is a viper’s song that could have come from the Lunceford book, complete with novelty, band-backed vocal, while “It’s About Time” jazzes the Westminster Chimes à la John Kirby (who swung Schubert’s saddest song). And then “That Zombie Music” borrows the opening of Artie Shaw’s “Nightmare” before rocketing into the full Raymond Scott.

“Could This Be Love?” teases us with a Rodgers-and-Hart-like title, but after some back-and-forth by alto and trumpet, Crytzer offers some too-hip-to-be R&H lyrics.

“Missouri Loves Company” (my favorite of the album’s many whimsical titles) is launched by pianist Jesse Gelber, again visiting his Basie style. And then the riffing builds and builds to a set-closing finish.

Although not quite: Crytzer tags on a last-dance number, his own version of a “Goodnight, Sweetheart,” an only slightly tongue-in-cheek vocal titled “Good Night, Good Luck” that he sings in a style that eschews pear-shaped tones in favor of horn-shaped licks. With the inevitable succession of piano arpeggios to finish it all.

The interplay among the musicians is so easygoing that you can picture them just coming off a string of one-nighters, relying (as must always be the case) the bedrock rhythm of Gelber, Dorn, Crytzer and bassist Andrew Hall.

Whether you’re a fan of this era of jazz or not, this is such a well-charted, well-played outing that it’s impossible not to love this album.
Posted by B. A. Nilsson at 10:20 PM