Helluva Town Dept.: The production originated at Barrington Stage in the Berkshires two summers ago, itself an outgrowth of a City Center Encores production. It moved to Broadway last October and already has run longer than the show’s previous two revivals, and is halfway to overtaking “On the Town’s” debut run in 1944. You should see it, of course, but now there’s a recording of it should you not be Broadway bound anytime soon. 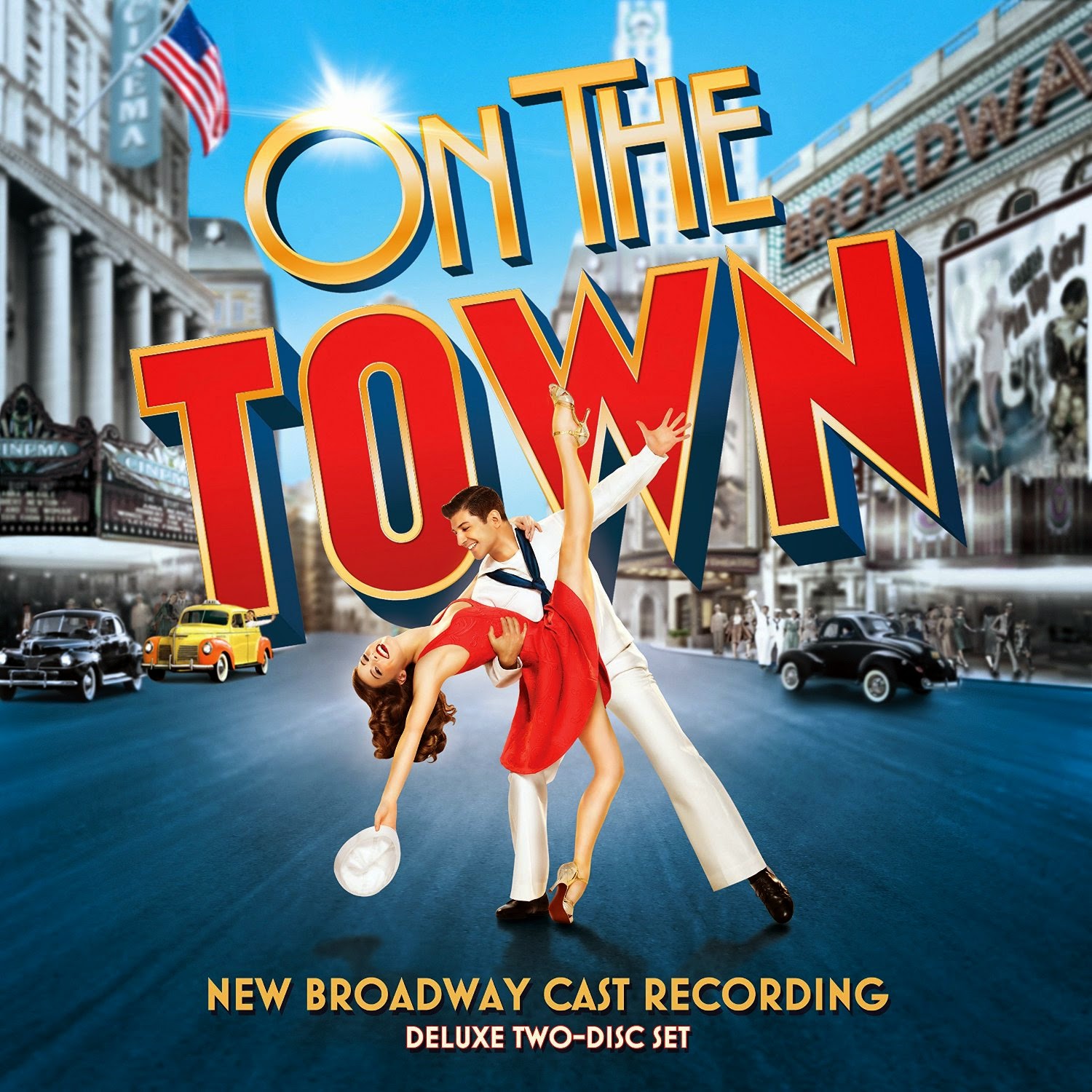 WHEN HOLLYWOOD CAME CALLING to put “On the Town” on film, it gave the show a wonderful cast, headlined by Frank Sinatra and Gene Kelly, and included some terrific location work, rare for a musical – or any movie – in 1949. But Leonard Bernstein’s score, his first for Broadway, was deemed too difficult for the movie-going public, and ten of the numbers were jettisoned in favor of a bunch of mush composed by Roger Edens.

There was no original cast recording, but Bernstein led a session in 1960 that featured such original cast members as the one-of-a-kind Nancy Walker and book writers Betty Comden and Adolph Green. (And LB himself in a brief, amusing cameo.) The gorgeous-sounding stereo LP could fit only so much; the CD issue restored a couple of numbers.  And it set a very high standard that Bernstein himself might have bested had he lived long enough to add this show to the series he recorded for Deutsche Grammaphon toward the end of his life. With his protégé Michael Tilson Thomas at the helm instead, it carried on the practice of putting opera singers in the major roles, which significantly weakened the earlier “West Side Story” and did little good for this one.

The current revival boasts a slew of terrific Broadway veterans, people with the vocal chops needed for the score, the dancing ability demanded by the ghost of Jerome Robbins, and the comedy flair that pulls the production together. The orchestra is as skillful an ensemble as you’re likely to find, and if they don’t always match the exuberance of the 1960 version, I’m guessing no group ever will. What’s here is a definitive record of one of musical theater’s finest scores, with all of its challenging instrumental sequences intact (enhanced, even) and proof that you don’t need Nancy Walker to make “Come up to My Place” come alive: Alysha Umphress as man-eating cabdriver Hildy gives city-struck sailor Chip (Jay Armstrong Johnson) the ride of his life, and, although you can’t see the magnificent acrobatics Johnson performs each time that cab comes to a sudden stop, you hear it in his voice.

Three sailors on a 24-hour leave explore New York City (“We’ll find the romance and danger waiting in it”) with an eye to meeting women; Gabey falls for the beauty pictured as the month’s Miss Turnstiles and sets off in what in life would be a futile pursuit. Tony Yazbeck appeared in recent Broadway revivals of “A Chorus Line” and “Gypsy,” and the amiability he brought to the role of Tulsa in the latter still didn’t foreshadow the poignancy he brings to “Lonely Town” and the thrill of his “Lucky to Be Me.”

Then there’s Clyde Alves as Ozzie. In my review of the show, I likened him to a young Norman Wisdom and praised his dancing to the skies, especially his footwork in “Ya Got Me,” Act Two’s big ensemble piece. There are great singers who needn’t take a step, let alone dance one, in order to put a song across, but I suspect that having all that kineticism built in can’t help but enhance the number. Alves and Elizabeth Stanley, as the mad anthropologist Claire, hit their duet, “Carried Away,” with tremendously entertaining energy without needing the shrieks that Comden and Green brought to the song.

The temptation to overdo is too often irresistible, and we get it in Philip Boykin’s turns as the Miss Turnstiles Announcer and Coney Island Emcee. Laughs are bovine in nature, needing no extra effort to produce a creamy yield.

As did the Broadway original, the production and the recording open with “The Star-Spangled Banner,” saving the show’s later-written overture to open disc two. And that’s only a fraction of the glorious dance music restored throughout. James Moore conducts the tireless orchestra, and the recorded sound is beautiful, boasting a warmth that never made it into those early-stereo Columbia LPs. But this set comes to us from PS Classics, the label founded by Tommy Krasker, the best producer we have of musical-theater recordings, and it takes an extraordinary production and gives it a definitive aural home.